If the states are laboratories of democracy, then the Republican Party’s research pipeline has run dry. Moderate Republican governors, a thriving species before last year’s elections, are all but extinct.

I’ve used data from the Web site OnTheIssues.com to rate each current governor’s ideology on a scale that runs from zero for liberal to 100 for conservative. OnTheIssues evaluates candidates’ ideology in each of about two dozen major domestic policy areas based on their public statements and votes. My process is simply to average the ratings for each issue area together and then translate them to my zero-to-100 scale. (In some cases, OnTheIssues has not scored the candidate on a particular topic, in which case it is excluded from the average.)

For example, Christine Gregoire, the governor of Washington and a Democrat, winds up with a score of 10, meaning very liberal. Rick Scott, the newly elected governor of Florida, has a score of 91 (very conservative). Other candidates are more in the middle: Mike Beebe, the Democratic governor of Arkansas, has a score of 39 (quite moderate), while Mitch Daniels of Indiana, a Republican, scores at a 74 (about halfway between moderate and conservative).

We can compare these scores against the ideology of the voters in each state, as measured by 2008 exit polls. This is also simple: I assign zero points for every voter who describes themselves as liberal, 50 points for every moderate, and 100 points for every conservative, and then average the result.

Here, for example, is how the comparison looks for current Democratic governors. (I exclude a handful of cases where OnTheIssues has not rated the candidate on enough issues to provide for a reliable estimate.) You see a fair amount of ideological diversity among the Democrats, from moderates like Mr. Beebe and Kentucky’s Steven L. Beshear to liberals like Ms. Gregoire and Deval Patrick of Massachusetts. You also see that there is a correlation between the ideology of the governors and the ideology of the states: with one or two exceptions, Democratic governors in moderate or conservative states themselves tend to be moderate, while Democratic governors in liberal states are quite liberal. 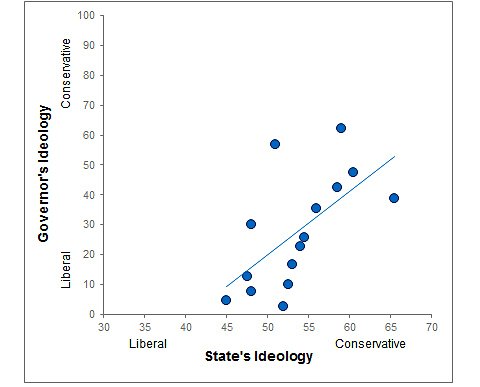 But if we perform the same exercise for Republican governors, the results look quite different: 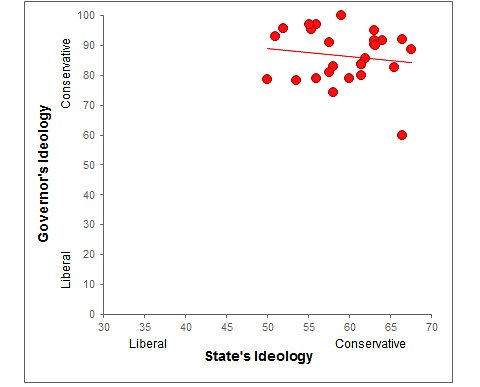 Unlike for the Democrats, there is almost no ideological diversity within the group: essentially all of the current Republican governors are quite conservative, taking moderate positions on at most one or two issues. Also unlike the Democrats, there is no correlation between the ideology of the governors and the ideology of the states. Whether you have a Republican governor in a fairly liberal state like Maine, a moderate state like Ohio, or a conservative one like Idaho, his agenda is likely to be highly conservative. (The closest thing to an exception — the outlier in the chart — is Gov. Gary R. Herbert of Utah, who shares some of the moderate tendencies of his predecessor, Jon M. Huntsman Jr.)

The contrast is especially striking when you put both Democrats and Republicans on the same chart. (The solitary green dot represents Lincoln Chafee, the independent governor of Rhode Island.) 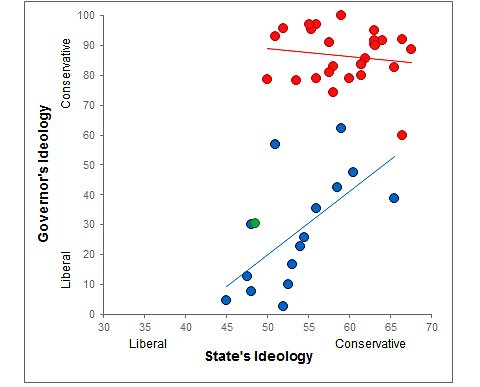 This is unusual behavior. Politics 101 would suggest that you need to be at least somewhat responsive to voters in your state. And American political parties in particular are traditionally broad-based coalitions that tolerate a fair amount of intellectual and ideological diversity, especially at the state level. Republicans, of course, are going to try to push policy toward the right and Democrats to the left. But you can go only so far before you get a ticket out of office, so electoral and policy goals remain in some degree of balance.

The new breed of Republican governors run counter to this principle in a way that wasn’t true as recently as a year ago.

In the next chart, I’m going to plot the ideological positions of the Republican governors who were in place a year ago, just before the 2010 elections (including some who continue to hold office now). This brings back into the fold at least a half-dozen moderate Republican governors who have since retired, like Arnold Schwarzenegger of California, M. Jodi Rell of Connecticut, Charlie Crist of Florida, Jim Douglas of Vermont, Donald Carcieri of Rhode Island and Linda Lingle of Hawaii. (Republicans lost the gubernatorial contest in five of the six aforementioned states despite their strong year overall.) 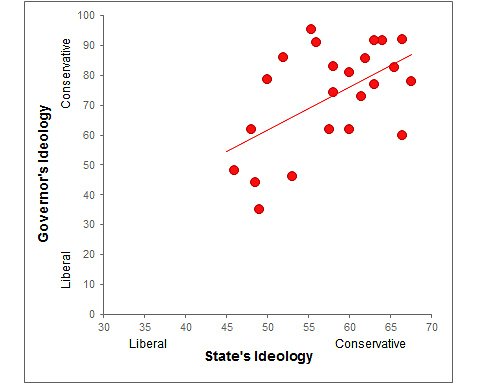 So just a year ago, there were plenty of moderate Republican governors — most of them in liberal or moderate states, where they were often quite popular. Now there are almost none, save some borderline cases like Mr. Daniels and Mr. Herbert.

The unsurprising result is that Republicans now have a group of extremely unpopular governors — particularly Mr. Scott of Florida, Scott Walker of Wisconsin, John R. Kasich of Ohio and Paul R. LePage of Maine, all of whom have disapproval ratings exceeding 50 percent. Other Republican governors in crucial swing states like Michigan and Pennsylvania also have below-average ratings. 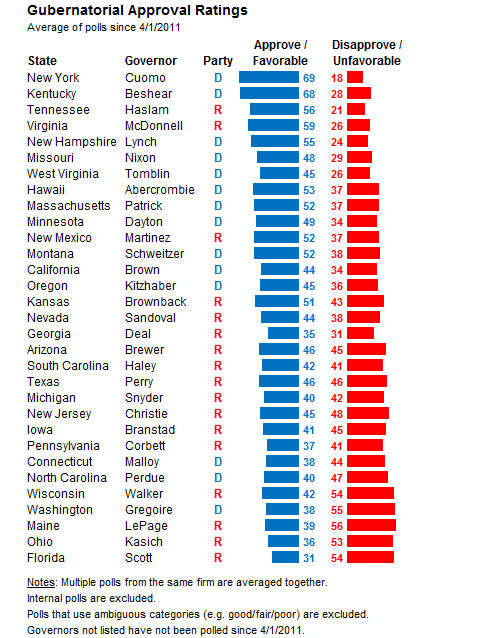 Republicans do have a couple of bright spots — especially Susana Martinez of New Mexico and Bob McDonnell of Virginia — who remain quite popular and should have a long political future. But other Republican governors who are linked to national politics, like Rick Perry of Texas and Chris Christie of New Jersey, are not especially popular in their home states.

I don’t know that I buy the theory that these unpopular Republican governors are likely to harm the aspirations of the party’s presidential nominee though a “reverse coattail” effect, the evidence for which is quite spotty. But I do think it’s a significant problem for Republicans on its own terms. It suggests that the party has become uninterested in appealing to swing voters — and that the voters are starting to notice.

Retribution from the electorate is a strong possibility unless there is a change of course.