In November 2009, a freshman at the University of Michigan was allegedly raped by another freshman, a kicker on the school’s football team, at a fraternity party. The victim immediately reported the incident to the Student Services Office, and to the campus and local police, but the university did nothing. Her story got out, and she and her friends began getting harassed by members of the football team; one player even threatened to rape her again, she claimed. She was intimidated and stopped cooperating with a police investigation, according to an account of the events provided to the university’s president.

It would be more than four years before the accused, then a graduate student, was expelled from the university after he was found in violation of the school’s sexual misconduct policy. The woman’s case became the basis for one of two complaints that led to the university being placed under investigation in February for violations of the gender-equity law Title IX.1

Michigan is one of 86 U.S. colleges and universities currently under investigation for Title IX violations related to sexual violence on campus, a number that has increased by 50 percent since the Department of Education’s list of such schools became public in May. Renewed pressure from politicians, victim activists and the public alike over the past year has colleges attempting to improve their handling of such cases.

But what makes this Title IX complaint stand out is that between 2004 and 2011, Michigan received nearly $1.1 million through a grant program sponsored by the Department of Justice’s Office on Violence Against Women (OVW) that gives funding to colleges to better handle and prevent sexual violence on campus.

A number of other schools that received the grant have made headlines for their alleged mistreatment of victims, and many of those cases have resulted in pending Title IX investigations. The University of Southern California received more than $1.6 million in grant funds from 2002 through 2008 but was placed under investigation for Title IX violations in June 2013, after a complaint alleging campus police said a woman was not raped because her assailant didn’t orgasm. The University of Connecticut, which received more than $600,000 total in grant funds in 1999 and 2001 and some of the nearly $500,000 given as part of a consortium grant awarded in 2009, was placed under Title IX investigation in December. A college police officer there allegedly told a victim: “Women need to stop spreading their legs like peanut butter, or rape is going to keep happening until the cows come home.”

In total, a review of documents obtained through a Freedom of Information Act request shows 24 colleges currently under investigation by the Department of Education’s Office for Civil Rights for potential sexual-violence-related violations of Title IX received grants through this program — more than a quarter of the 86 colleges under investigation and 10 percent of all colleges and university systems that have ever received the grant.2 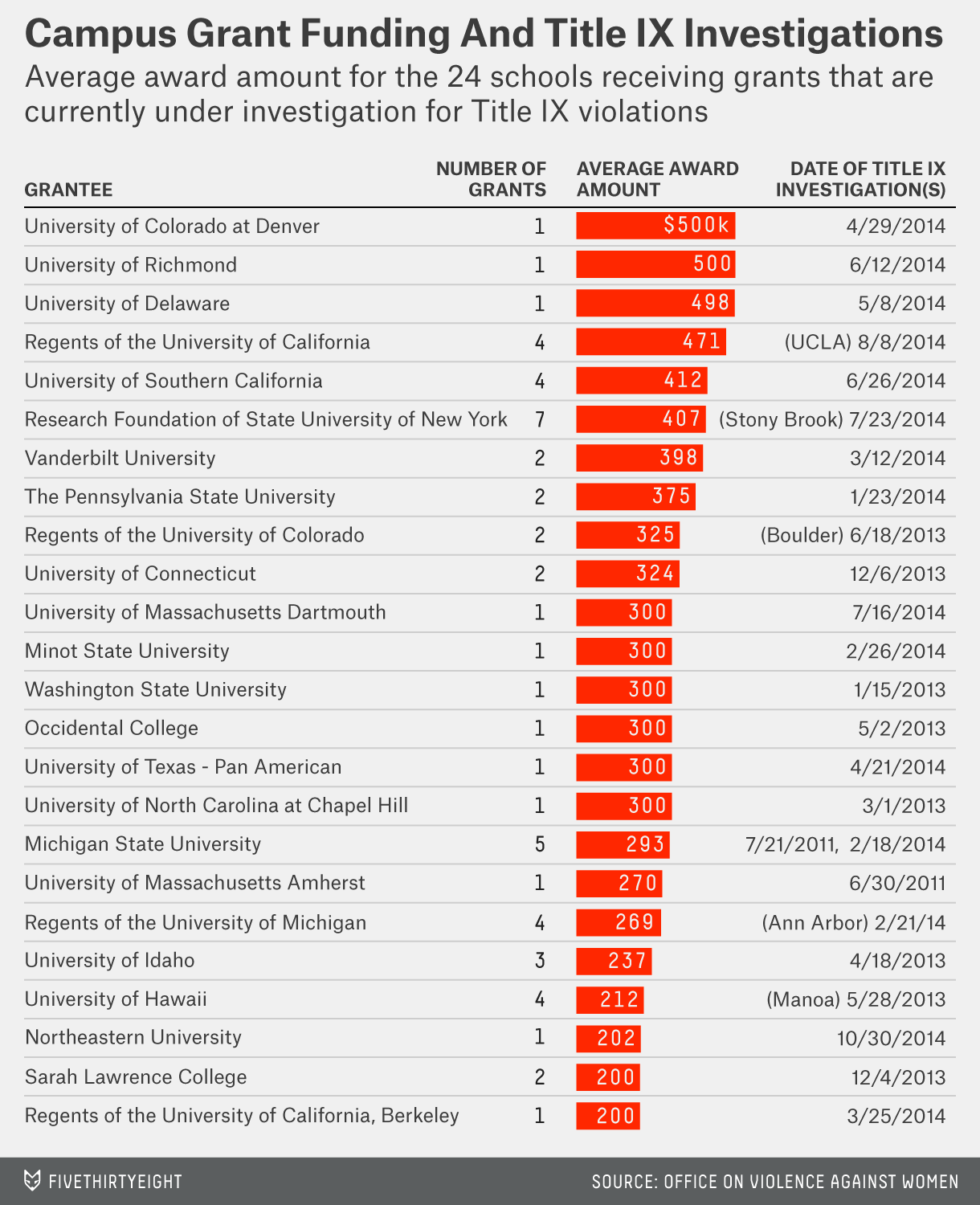 A spokeswoman for the Department of Education said in an email that “a Title IX investigation does not mean that an institution has violated the law.” However, advocates worry the grant may not be helping colleges achieve sustainable and systemic changes to how they deal with sexual violence.

Douglas Smith, a former professor of pathology at the University of Michigan, filed the Title IX complaint against the college for its alleged mishandling of the freshman’s 2009 sexual assault. He said his main concern with the grant program was that colleges might use the funds to protect themselves rather than victims. At Michigan, which began receiving funding in 2004 and received its last three-year grant in 2008, he said the college used its status as a grant recipient as a public relations ruse.

“It’s really about protecting the university’s reputation,” Smith said, particularly criticizing the school’s Sexual Assault Prevention and Awareness Center. “SAPAC was not about identifying problems and trying to prevent rapes or even get justice for women who had been raped. It was secretive.”

Dana Elger, a spokeswoman for the University of Michigan, said in an email that the Office of Civil Rights investigation had nothing to do with how grant funds were used and pointed to measures the university undertook with the money. “The OVW Campus grant funded staff who provided direct services, and funded other required grant objectives and a number of specific projects including establishing a mandatory prevention and education program for all incoming, first-year and transfer students; improving outreach to underrepresented communities on campus; and strengthening existing educational and crisis response initiatives on campus; among other goals,” she said.

Laura Dunn, founder of SurvJustice, a national survivor advocacy group based in Washington, D.C., that specializes in college sexual violence, said schools getting funding should be cut off if they come under investigation for Title IX complaints.

“Not only are they under investigation for something that allegedly could remove all their funding, but they are getting more funding?” Dunn said.3 “The Department of Education and Department of Justice aren’t even on the same page as to who is in trouble, who needs to be scrutinized and who do we support in giving these grants to.”

The Grants to Reduce Sexual Assault, Domestic Violence, Dating Violence, and Stalking on Campus Program was created by Congress in 1998 to develop and strengthen college security, investigation strategies, victim services, prevention education and awareness programs to combat sexual violence. The Campus Grant Program, as it is often called, gave more than $139 million to 227 colleges and university systems between 1999 and 2013.

The size of the grants and the maximum amount of funding a college can receive from the program has varied over the years, but the median grant awarded between 1999 and 2013 was $300,000. However, the Violence Against Women Reauthorization Act of 2013 decreased the funding of the program from $15 million to $12 million annually through fiscal year 2018. In addition, the maximum award per college declined from $500,000 to $300,000.4

The application process is extremely competitive. In 2013, only 22 percent of applicants received the grant. To get it, colleges must form partnerships with stakeholders including an external law enforcement agency, a local nonprofit organization, the college president, a student affairs administrator, the Title IX coordinator, campus law enforcement, campus disciplinary boards and a faculty representative. That colleges must have so many systems in place to deal with sexual violence before even receiving funding perhaps makes it especially surprising that so many past grant recipients are under investigation for potential Title IX violations.

Colleges can use grant funds in many ways to achieve the program’s goals, from disseminating information on victim services to creating programming for underserved populations on campus.5 At minimum, college grantees must create a coordinated community response to sexual violence, a mandatory sexual violence prevention education program for all incoming students, and a training program for all campus law enforcement and disciplinary board members on how to respond to sexual violence.6

Dunn suggested one reason colleges might be in violation of Title IX despite receiving the grant: They spend too much of the funds on prevention efforts rather than responding to incidents. “You can have a million prevention programs, but the moment a survivor comes to you and you fail them, that’s when you have a federal complaint,” she said.

Data reports on the grant program allow for a quantitative look at how grant funding is used. Congress mandates colleges submit semiannual progress reports to the OVW, which gives these reports to the Muskie School of Public Service at the University of Southern Maine to create aggregate reports on how grantees are using their funding. 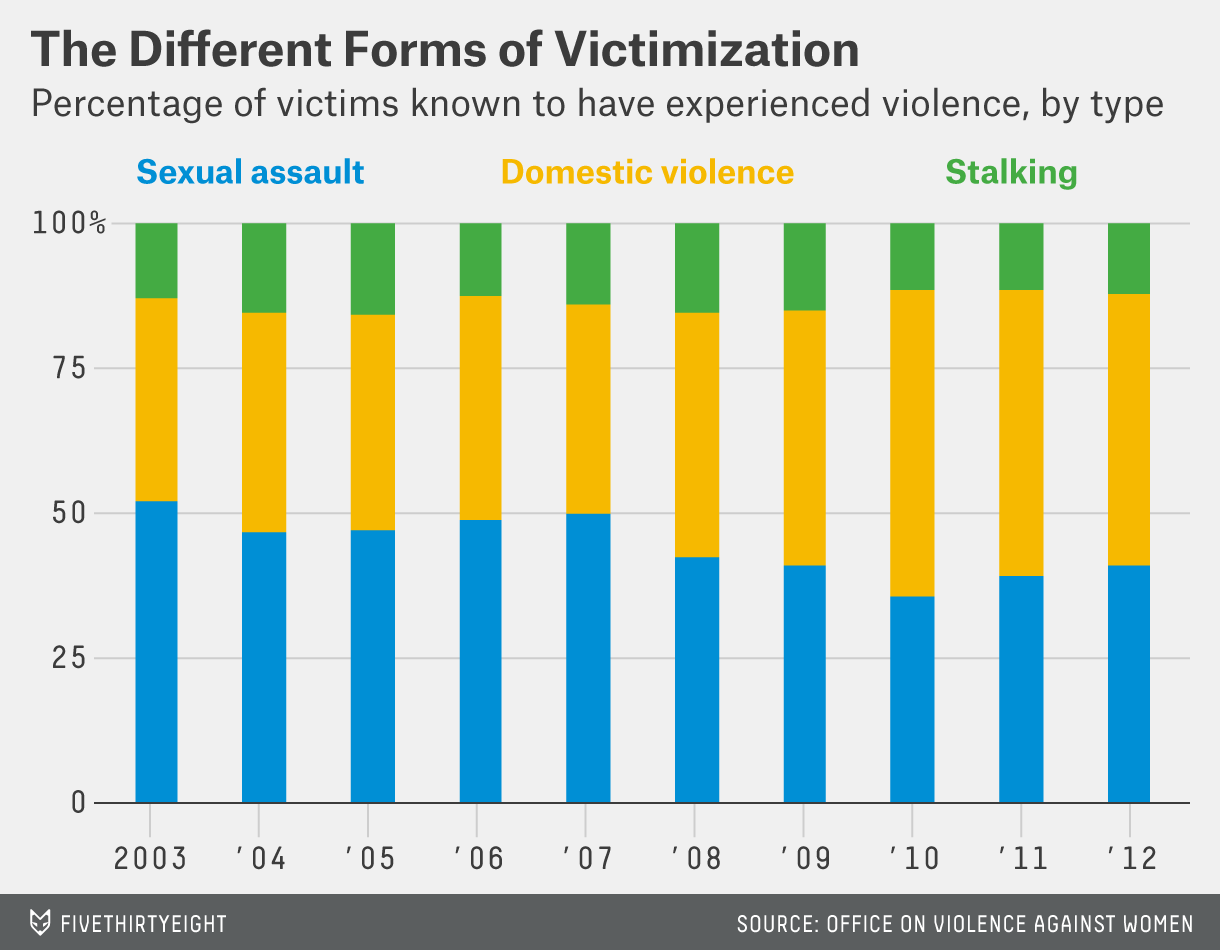 The charts below shows a breakdown of those victims by race and gender.9 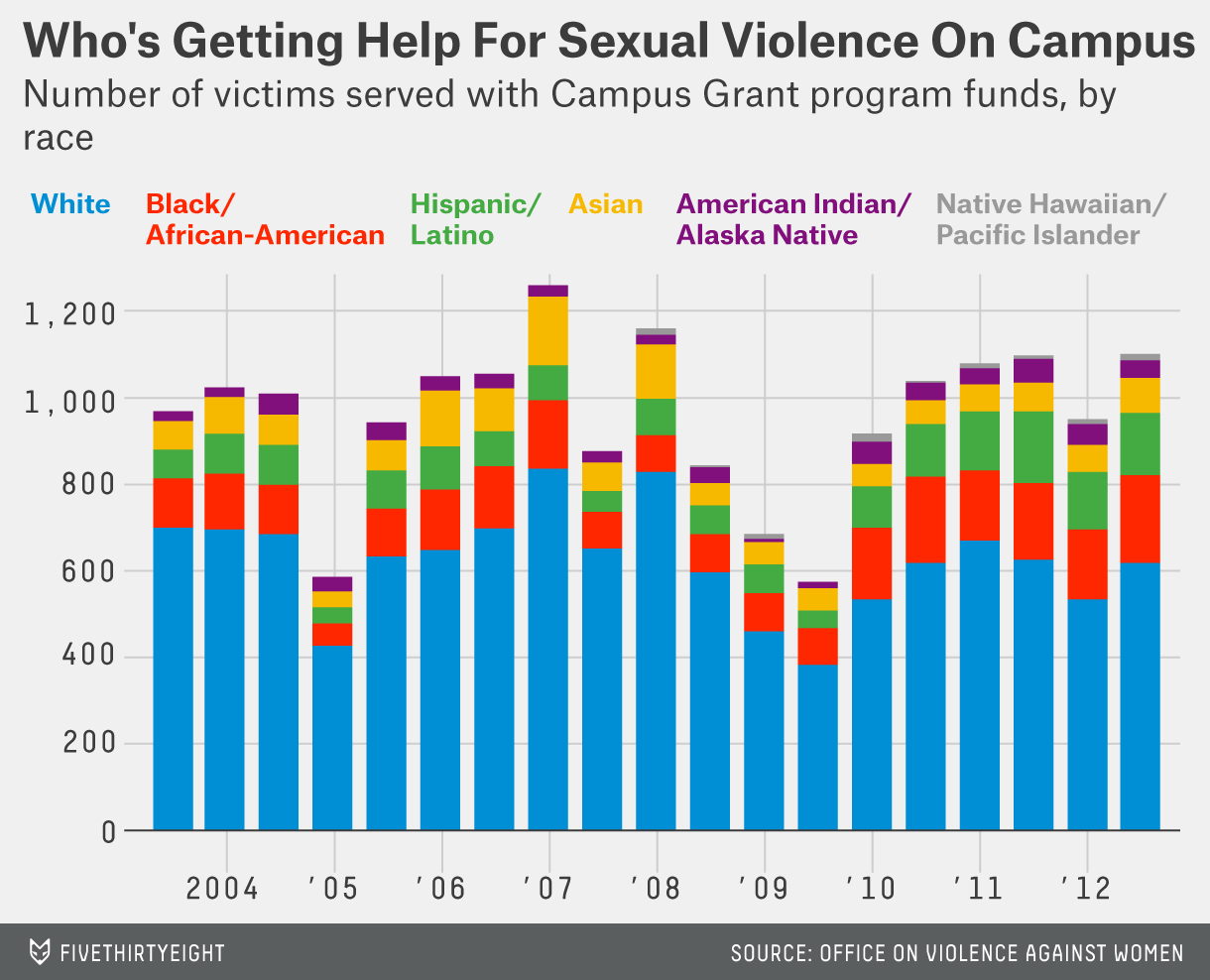 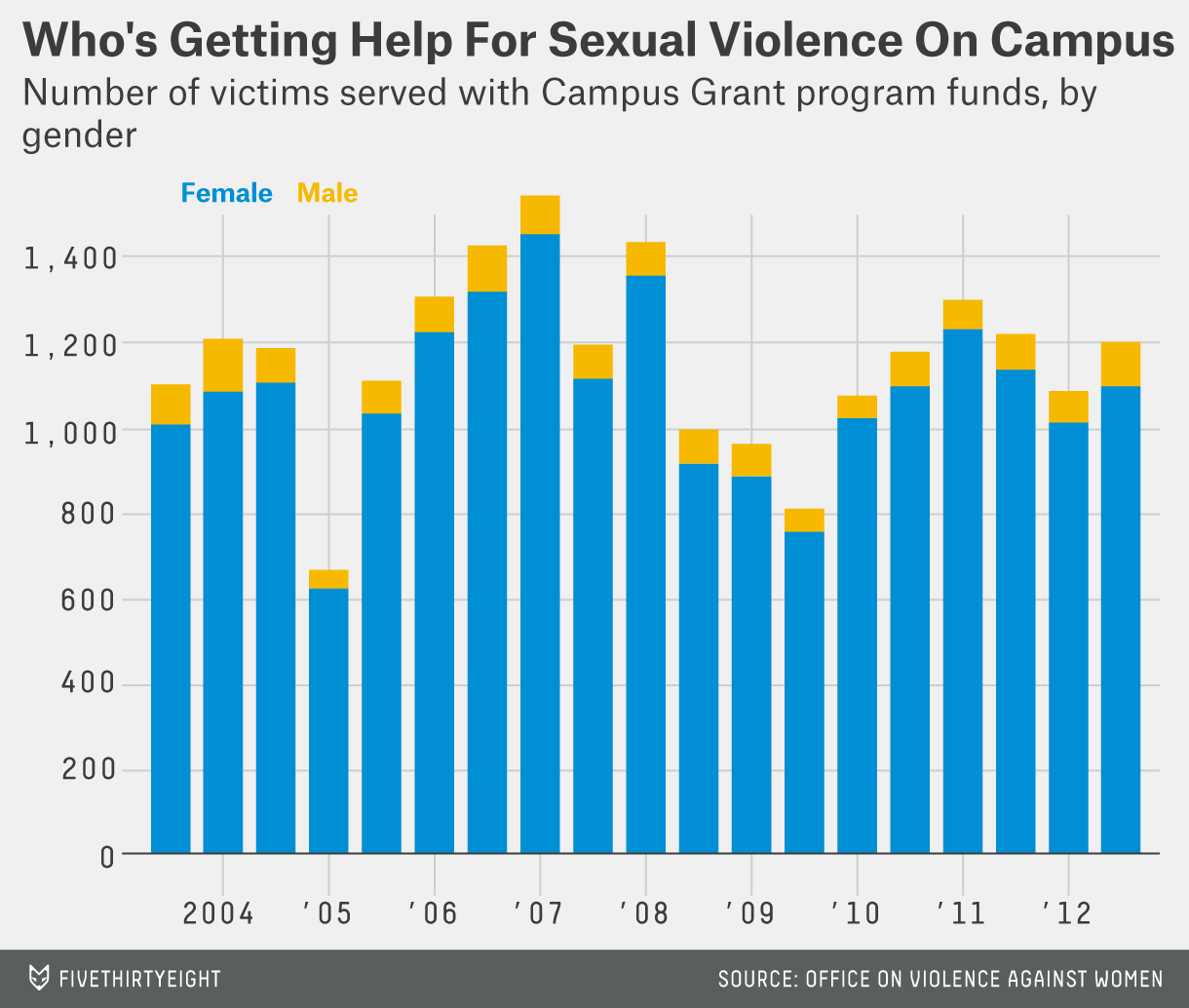 The progress reports also indicate the percentage of grantees using funding for victim services, staff training and staff hiring in any given six-month reporting period.

These data reports showed that 35.2 percent of grant recipients didn’t use any funds during the average six-month reporting period for victim services, while 78.6 percent of grantees on average in each six-month period used funds for staff training.

On average, 92 percent of grantees used funds for hiring purposes. Staff members were more likely to be hired into prevention and awareness positions, such as trainers/educators (as they were at 20 percent of grantee colleges that hired staff, on average), than to response positions such as victim advocates (14 percent) and counselors (3 percent).10

To an extent, the data confirms Dunn’s concern that colleges have used more funding on prevention than education. Staff members who were in positions related to prevention and awareness were more likely on average to be trained using grant funds than staff members who were responsible for response efforts. For instance, out of the colleges who used funds to train staff, on average 18 percent of the total staff members trained were peer educators, whereas just 5 percent on average were victim advocates.11

While colleges have the grant, they receive training by organizations that specialize in handling sexual violence, such as the Clery Center for Security on Campus and the Victim Rights Law Center. But Dunn said what sets successful college grantees apart is how much thought they put into sustaining their sexual violence response and prevention efforts after the grant expires.

One program that has successfully used the grant to create sustained change in how sexual violence is handled on campus is the Aurora Center at the University of Minnesota, which received more than $1.5 million in funding between 1999 and 2011.

Katie Eichele, director of the Aurora Center, said the university was able to sustain its progress in part through strong partnerships with leaders on and off campus. The center’s work was deemed so important to the university that a student committee and the university’s student affairs office have chosen to keep funding it since 2011. “The leadership prioritized funding of our department,” Eichele said.

Similarly, Dunn said that for colleges to sustain progress, leaders in college communities need to step up. “Unless the president is invested, or the board of regents, or whoever the main heads of schools are, unless they are invested, something as great as an OVW grant is a temporary Band-Aid,” she said.

CORRECTION (Nov. 11, 10:10 a.m.): An earlier version of a chart in this story failed to note that the average award amounts for colleges receiving funding through the Campus Grant Program were in thousands of dollars.

CORRECTION (Nov. 12, 3:04 p.m.): An earlier version of the same chart in this article misstated how Campus Grant Program award amounts were averaged; it was by grant, not by year. The chart also incorrectly stated the number of grants and average award amount for grants to the Regents of the University of Michigan; it was four grants for an average of about $269,000, not three grants for an average of about $360,000.

Monica Vendituoli is a freelance reporter and a senior at Wheaton College in Massachusetts. Her work has appeared in The Chronicle of Higher Education, USAToday.com, USA Today College and OpenSecrets.org. @mvendituoli