This is review No. 14 of 16 in the first round of our competition. Each review will compare four burritos, with my favorite advancing to Round 2.

For the second set of reviews in the California region, I’m making a trip to the sea to eat fish and chips, wrapped up in a tortilla of course. 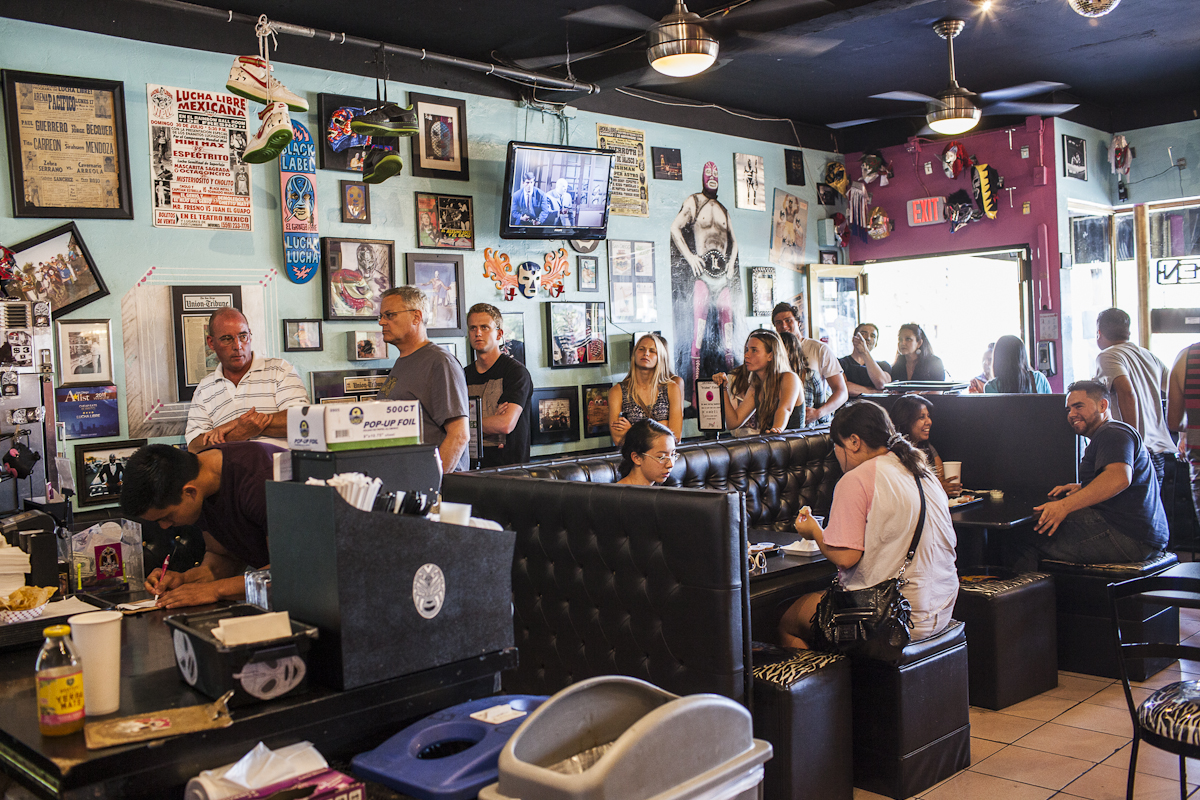 Lucha Libre has gone all out with the décor. Mexican wrestling paraphernalia covers every inch of the hot-pink walls, the seats have wrestling masks embroidered on them, a decal on the door reads “People Wrestle Us On Yelp.” A rope and a red carpet (though it’s black in color) keep the hordes in line, literally and figuratively. A champion’s booth in the corner, gold of course, can be reserved by the hour for parties of four or more. The restaurant’s website is TacoSmackDown.com. So now you know what you’re getting into.

The favorite burrito is the Surfin’ California, made evident by two messages next to it on the menu: a lucha libre mask designating it a restaurant specialty, and a note in red that it was featured on the Travel Channel show “Man vs. Food.” The Surfin’ California is a California burrito (french fries, carne asada, cheese and avocado) with shrimp, “Super Secret Chipotle Sauce,” and pico de gallo.

I’m not a huge fan of surf and turf in a burrito. That’s not to say that seafood and land-grazing food can’t go together, but when the two are sharing the main protein duty, the incongruity of the textures bothers me more often than not. That was definitely the case here; even though the steak and shrimp were both tasty individually, I was uneasy about what I would get with each bite, and the flavors didn’t meld well.

An enormous tortilla, thick and chewy, overwhelmed the interior of the burrito. The french fries were not crisp enough to stand up to the thick, creamy and abundant sauce. This being Southern California, the avocado was ripe and fatty. There was spice, there was freshness, there was flavor, but nothing was great.

Lucha Libre is conveniently located between a highway and a liquor store, assuring late-night mayhem, the hour most appropriate for eating this particular burrito. 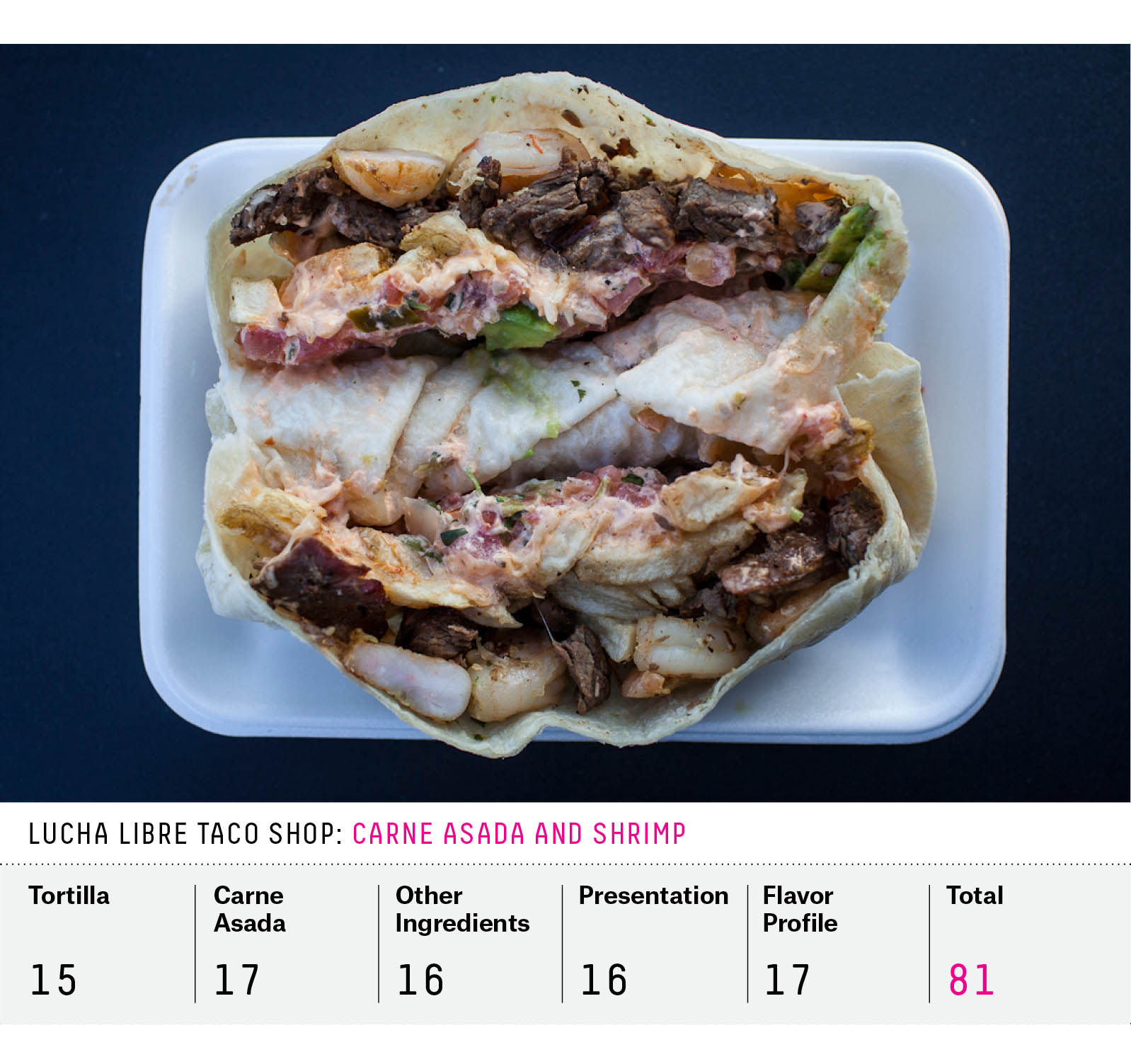 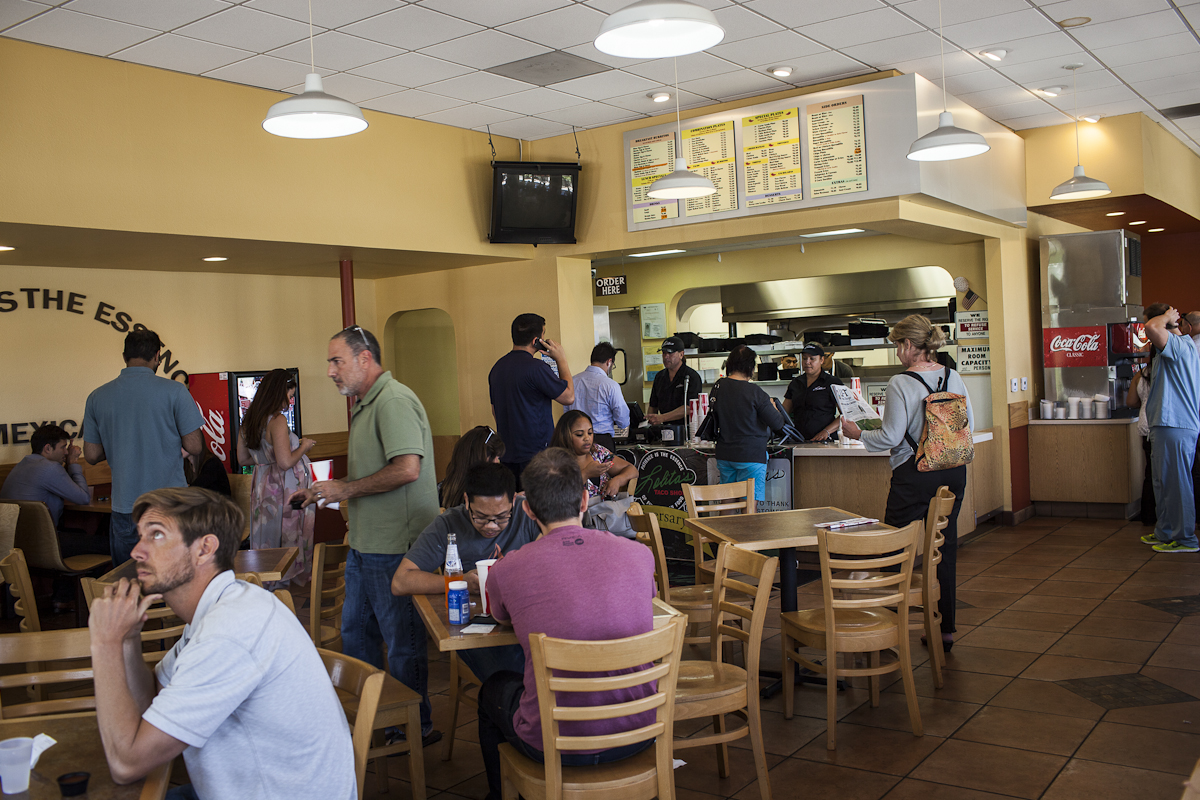 There are several Lolita’s locations, a testament to its popularity in San Diego County. At lunchtime, the restaurant bursts with patrons, a line out the door, and huddles of people waiting for orders and tables. At the location in Kearny Mesa, those lunchtime patrons include police officers from a nearby precinct, office workers in pleated khakis and medical professionals in scrubs. An airy main dining room connects to an outdoor patio via a salsa bar alcove.

I knew I was going to eat a California burrito at Lolita’s, our No. 3 seed in the region, but when I found out about its other speciality, the 2-in-1, I ordered it as well. It’s filled with carne asada, avocado, cheese and … taquitos! Fried, rolled tacos — inside of a burrito. All together it was too much tortilla for even this carb-o-holic, but it was strangely delicious, and the intense crunch of the fried corn tortillas was a joy to experience.

Back to the burrito at hand. I placed my order for a California burrito, waited 20 minutes for the order (“Patience is the essence of fine Mexican food” is the restaurant’s preemptive motto) only to find that Lolita’s standard California burrito does not include avocado. I gave it a try, but the salty, crisp fries necessitate creamy, fatty avocado for balance. I ordered another burrito and sat down. A crackly voice on the PA system called out “number 70, numero setenta, number 70.” I looked at my ticket: number 93, only 23 orders to go.

Finally, with the correct burrito in hand, I went to work. The tortillas are above average in size and flavor, and oilier than other tortillas in the bracket. The carne asada maintained a hint of pink inside and was cut into tiny morsels, while the sour cream was thick and intensely tangy. Shredded cheddar cheese in abundant quantities was just beginning to melt next to the almost-crisp-enough french fries throughout. The burrito seems effortless in its execution; 25 years of rolling have taught Lolita’s how to prepare a timeless California burrito. 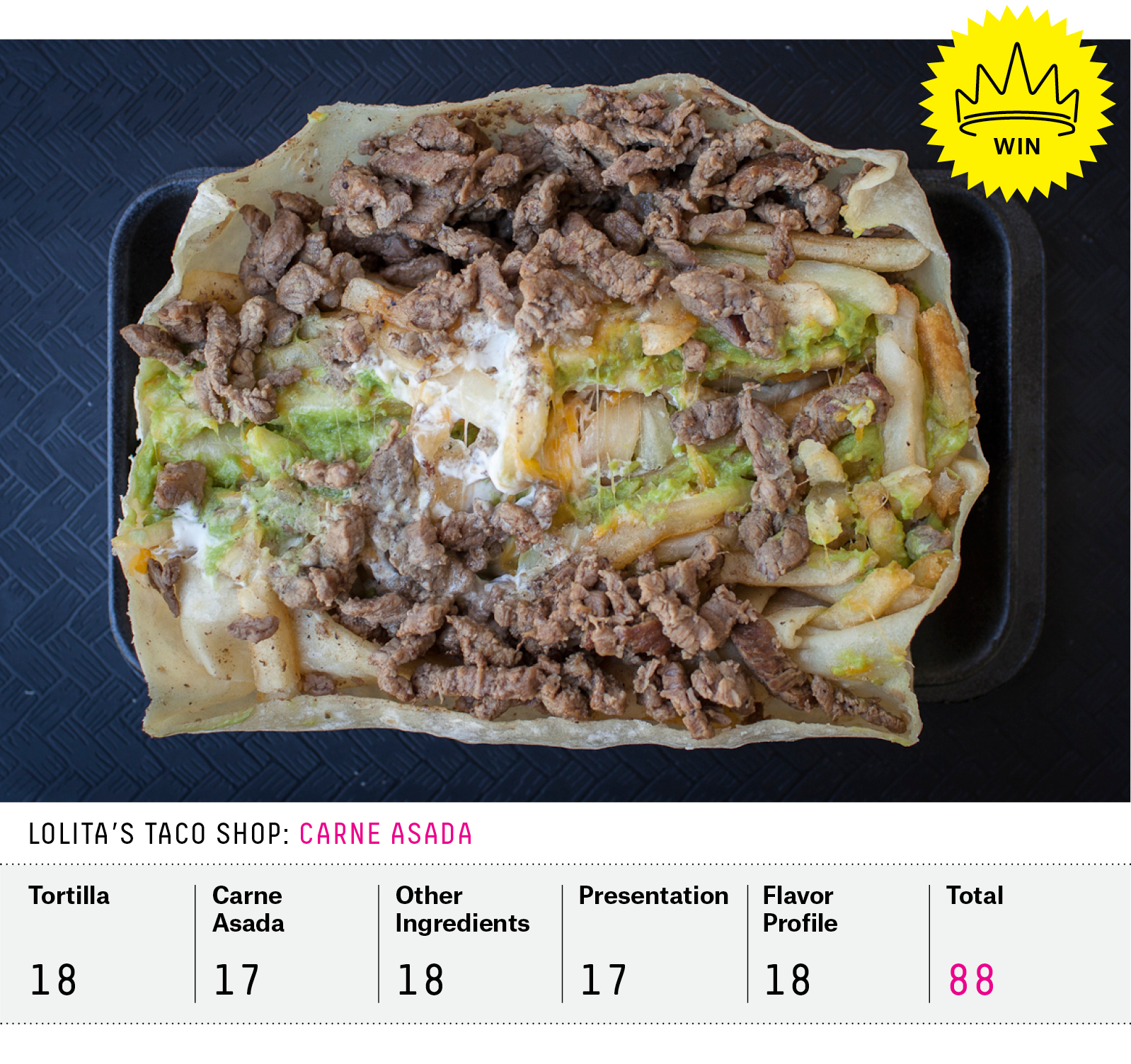 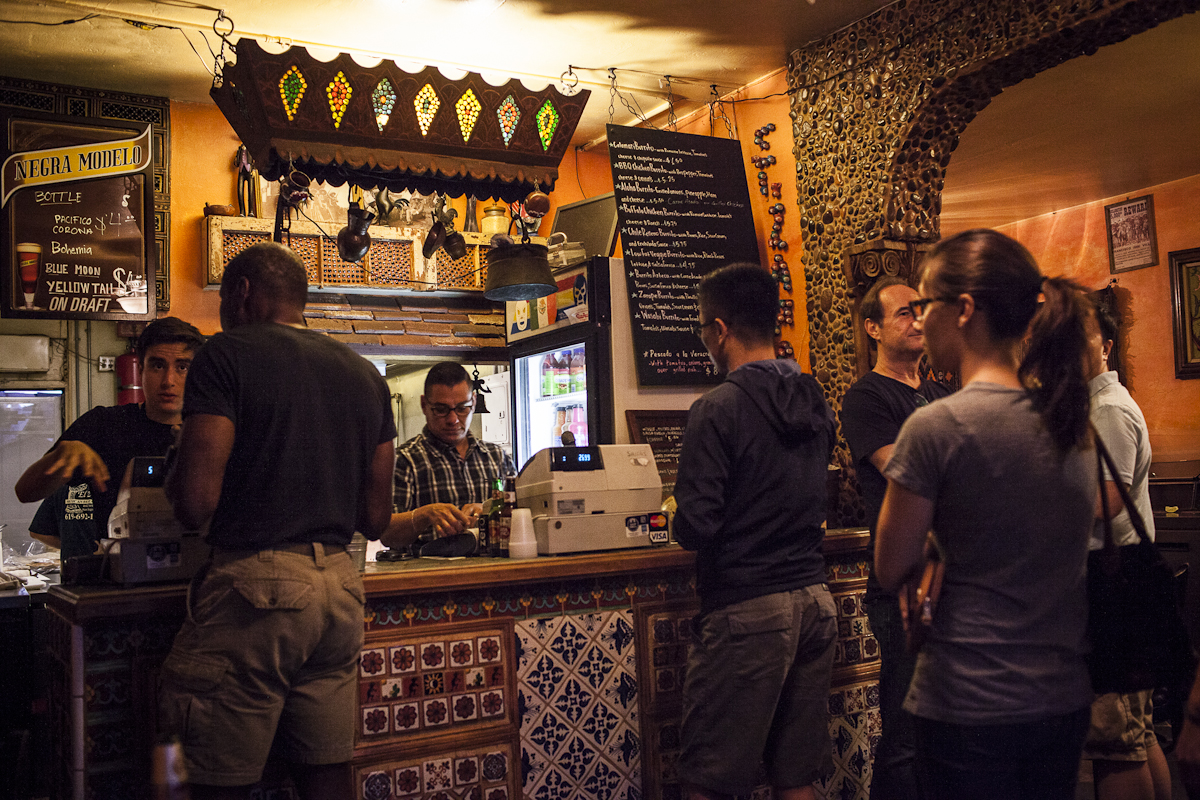 The streets of University Heights in San Diego are lined with cottages and palm trees. It’s exactly what I imagined San Diego would look like before I’d been. In the Park Boulevard business district, families and teenagers strolled the evening streets. Most of them seemed to be headed to El Zarape.

I later wondered if the line out the door was responsible for the restaurant’s lack of attention to detail. A tiny kitchen would make it difficult to prepare this robust list of menu items with care at half the pace. “Best of” stickers on the door are an indication of El Zarape’s heyday, which appears to have been 2005-2007 (the dated accolades further evidenced by awards from the now-defunct AOL City Guides).

I managed to get a table in the front window and munched on stale chips with tasty salsas while I waited for my order. A green salsa contained flecks of cilantro and onion with a smooth tomatillo base, while the red was smokier with a hint of paprika.

I tried the house burrito, with chicken and mole, but the California burrito was better. While a little tough, the carne asada bore the strong aroma and flavors of its time on a well-seasoned grill. Big chunks of stewed tomato-based salsa were dispersed throughout the burrito, the juices combining with guacamole and sour cream to create a thick, acidic, tangy bath. The fries were seasoned to a burnt-orange color, but were soggy and limp. With a little more TLC, this could be a great burrito, but flaps of average tortilla and mushy fries were major handicaps. 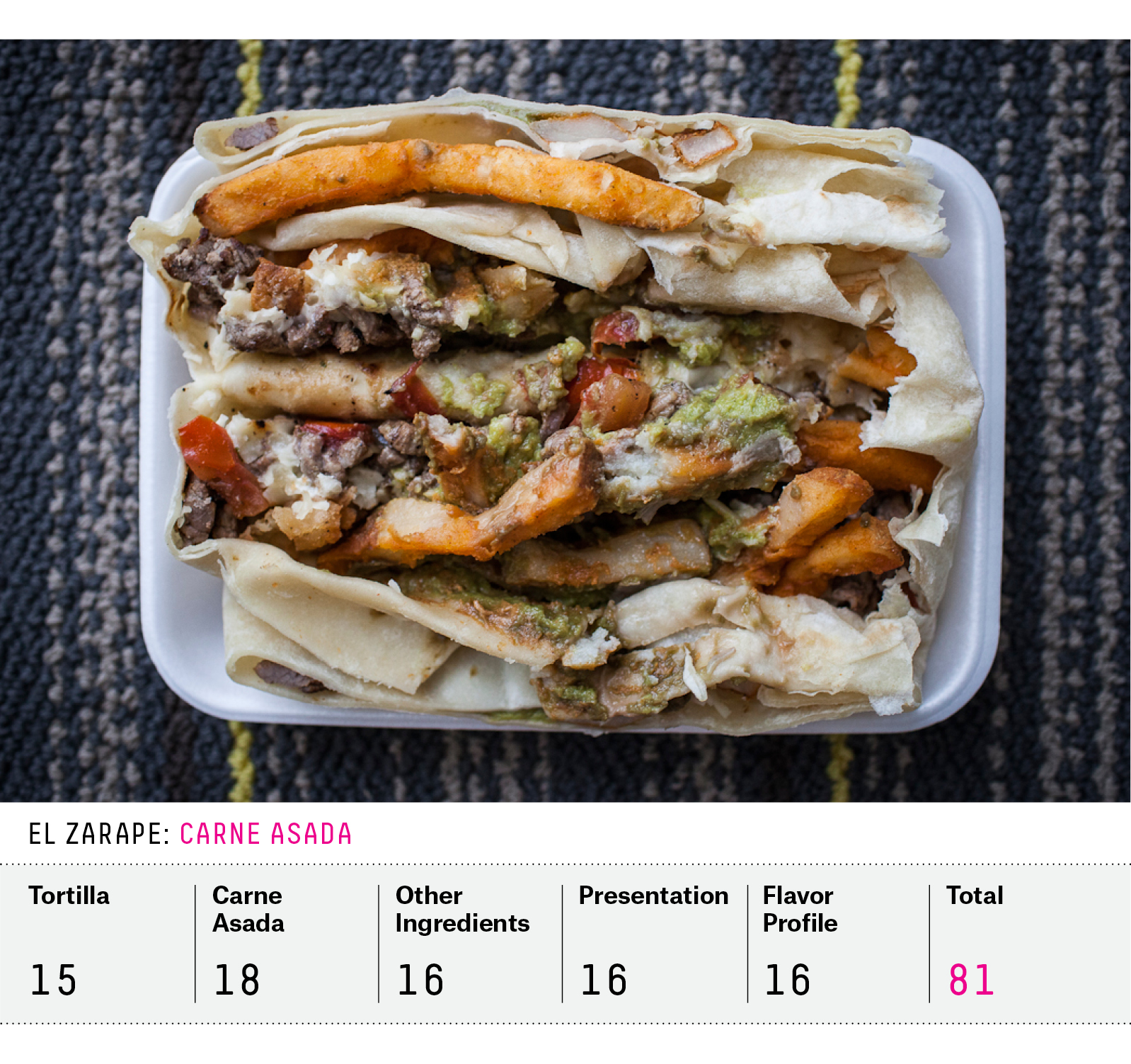 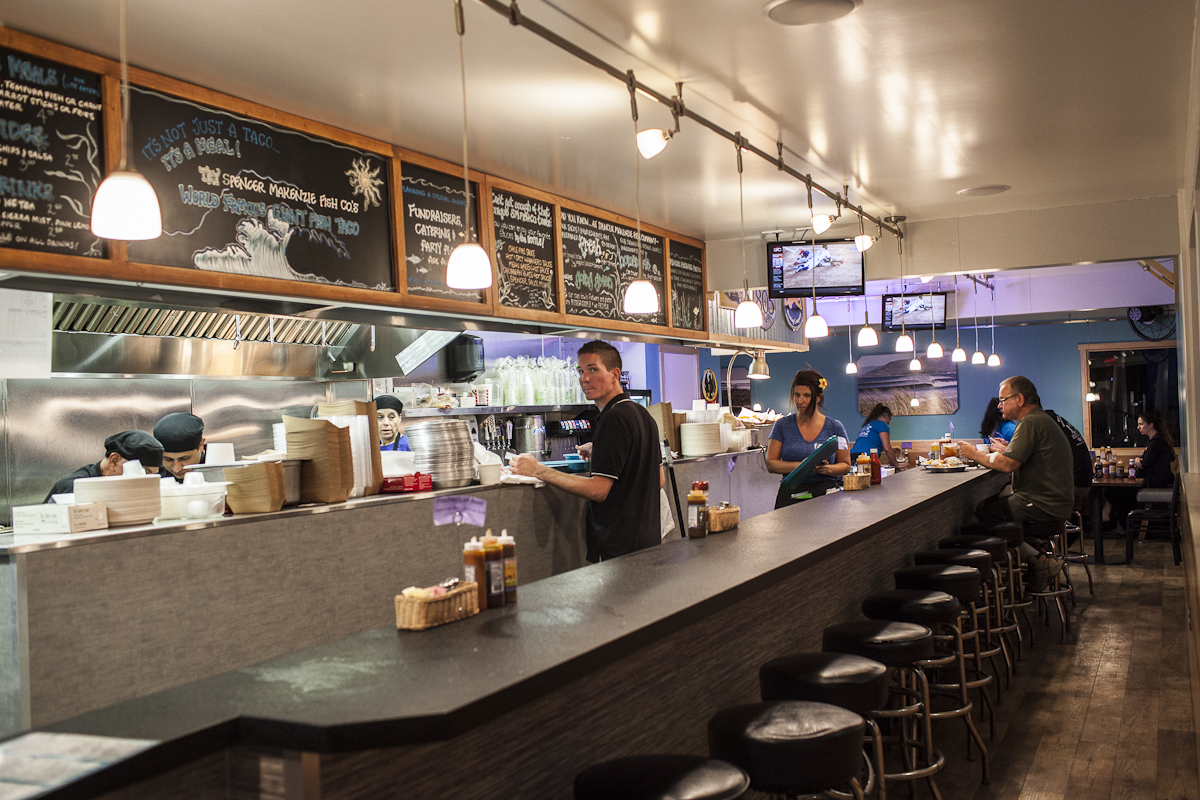 Ventura is an oddly quaint and quiet beach town just an hour north of Los Angeles (subject to traffic, of course). A highway separates the beach from downtown, while rolling hills hold the city in from the other side. Spencer Makenzie’s is located on a corner at the edge of the downtown in what looks to be an old diner, though it’s been recently remodeled. Wood floors, teal walls and gray wallpaper are bright and clean. The windows feature posters advertising the largest cornhole tournament on the West Coast. A man eating clam chowder yelled for the staff to turn up the classic rock tunes playing on the overhead speakers.

Spencer Makenzie’s offers the choice of ordering at a window and seating yourself outside, or more traditional dining room service inside. The weather commanded me to stay outside; it was still warm as the sun set behind the petite mountains to my right, bathing the sky in soft blues and pinks. Tanned tweens on skateboards with checkered shorts and colorful shoes stood behind me in line. A couple in front of me held their dog’s leash close, his perky ears and thudding tail visibly sandy. I could feel the salt water from his recent jaunt in the ocean when I reached down to pet him.

Although it wasn’t as sandy, the grilled fish and shrimp burrito also reminded me of how close I was to the sea. The shrimp was exceptional, juicy and plump, and though the fish was a little dry, it was flaky and bathed in Spencer Makenzie’s secret sauce, a creamy, spicy concoction. Cabbage shreds scattered throughout cleansed the palate, while porridge-like white rice showed up in the occasional clump. Of the three house-made salsas, the sweet chile fire was my favorite, a masterful blend of heat and sweet that sang when paired with the shrimp (by the end of the burrito, the tortilla was nothing more than a vehicle for the addictive sauce).

When it was all gone, I took a stroll on the pier a few blocks away. Families picnicked while they fished, couples strolled under the lamplight. Come to Ventura for the burrito, but stay for the peaceful ocean air. 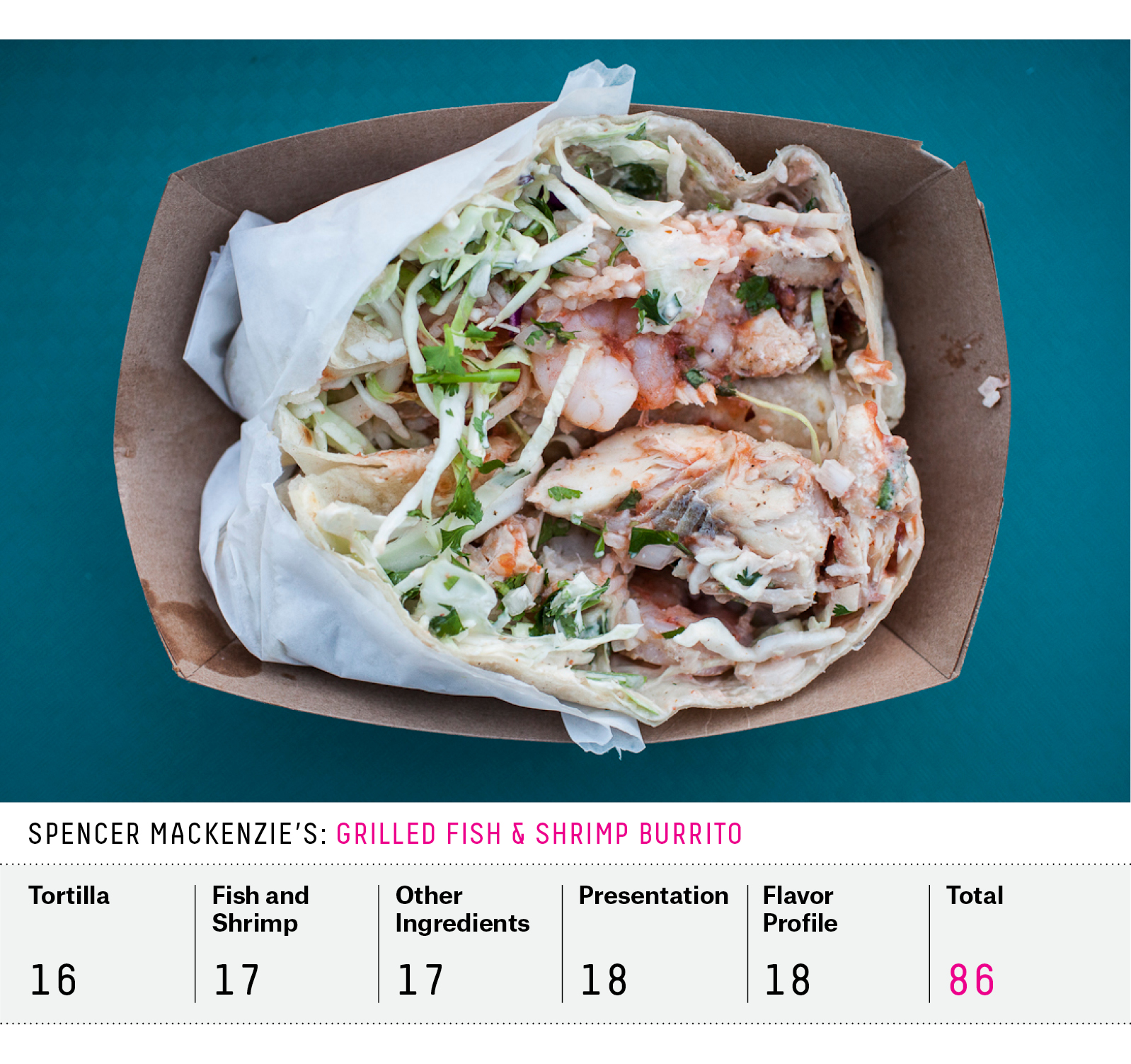 A lot of people seem weirded out by the idea of french fries in a burrito. I find it delicious, and though I wouldn’t have guessed it to be a stellar beach food, it is. In San Diego, Lolita’s does it best.