Hope is a hot commodity in drought-stricken California these days. When the Climate Prediction Center last month issued an El Niño watch for next winter, the media jumped on news of the weather phenomenon as possible salvation for the Golden State. “Thirsty California pins hopes on El Niño’s return,” one headline on SFGate read. “So long California drought?” Businessweek asked in another. The rush to identify El Niño, characterized by the periodic warming of surface water temperatures off the northwestern coast of South America, as California’s savior was based in part on the belief that a strong El Niño would bring as much rain as it did in the winters of 1997-1998 and 1982-1983. El Niño was responsible for much of those years’ record rainfall and caused a slew of mudslides across the state.

Unfortunately for California, such a soaking probably won’t happen again. I ran an analysis of the 22 El Niño events in California since 1950 and discovered virtually no direct relationship between the phenomenon, which often lasts about a year, and a wetter than average winter season in California. (The state receives the vast majority of its rainfall from November to March.)

That’s unfortunate, because California could desperately use any precipitation, even if the state has to wait until next winter. California endured its driest year in recorded history in 2013 and some have suggested that the current drought plaguing the heart of the state’s $44 billion agricultural industry may be the worst in 500 years. Gov. Jerry Brown declared a drought emergency in January, and many of the state’s reservoirs are below 30 percent full.

Long-range forecast models have come to a consensus recently that a minor to moderate El Niño pattern may develop six to nine months from now. Forecasters believe there’s at least a 50 percent chance of the phenomenon forming, though it’s worth noting that a similar forecast in 2012 turned out to be a bust.

But even if El Niño does materialize, nothing about it guarantees rain in California. El Niño fairly consistently causes dry and hot conditions across many parts of the planet and cooler and wetter than average conditions in others. Its impact on the continental United States is variable and, for a more localized area like California, next to impossible to predict.

My analysis of data since 1950 shows that minor to moderate El Niño patterns have brought California widely different outcomes, some of which have varied year to year. As shown by a cataloguing of data by Jan Null of Golden Gate Weather Services, a weak El Niño pattern occurred in the winters of 1977-1978 and 1978-1979. The former was a drought year for the Golden State, while the next saw sharply wetter than average conditions.

The table below lists rainfall data during El Niño years for the Central Valley region of California. 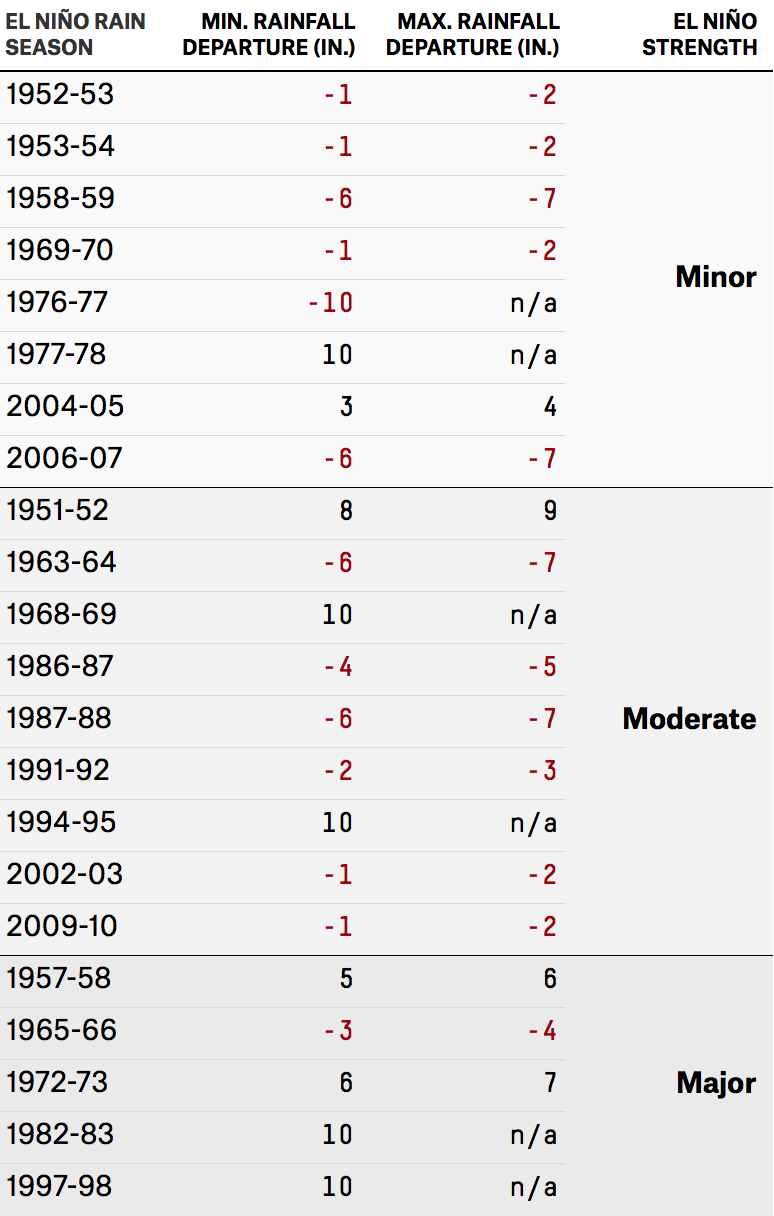 Scientists increasingly believe the El Niño pattern that may be coming for California next winter is a strong one. Strong El Niño patterns do seem to bring precipitation, though only five have occurred since scientists began monitoring the data. That makes the sample size too small to divine trends with any certainty. While above-normal precipitation is the norm in these years, the strong El Niño pattern in 1965-1966 produced exceptionally drier than average conditions in northern and central California.

Strength definitely matters; we just don’t know what it will mean for local communities. According to the National Weather Service, changes in the water temperature in the Eastern Pacific can have dramatic impacts on tropical rainfall in that region. Those changes distort the airflow aloft five to 10 miles above thousands of square miles of the Earth’s surface, causing a ripple effect that typically causes major shifts in global weather patterns. The warmer the water is, or the stronger the El Niño event is, the more pronounced these changes can become.

But more specific predictions are problematic, in part because of budget cuts to the Tropical Atmosphere Ocean project, the buoy system that collects much of the ocean temperature data for the National Oceanographic and Atmospheric Administration. TAO has been operating at below 50 percent, creating gaps in the data.

Even if a strong El Niño pattern did develop, it could turn out to be more of a threat than a blessing. Exceedingly dry soil doesn’t initially absorb water well, and a deluge could cause flooding or mudslides that could threaten both California residents and the state’s highly valued agricultural crops. “That could be a disaster,” said Mark Wysocki, a senior lecturer at Cornell University who helps run the Northeast Regional Climate Center. “The best California can hope for is a return to normalcy.”

Given El Niño’s history, though, normalcy isn’t necessarily on its way.

Stephen Stirling is a weather, climate and data reporter for The Star-Ledger in Newark, N.J. @SStirling