Cletus Andoh and Radcliffe Saddler are just two of 3.3 million students across the country who are celebrating their recent graduation from high school, but their path to a diploma was unlike that of most of their peers. Because of that difference, they will spend Tuesday at the White House discussing the future of education reform for the “Celebrating Innovations in Career and Technical Education” event as part of Michelle Obama’s Reach Higher initiative.

Andoh, 17, who will continue his education at Syracuse University in the fall, and Saddler, 18, who’s beginning his career as an associate analyst for IBM Market Development and Insights, are two of six students who make up the first graduating class of P-TECH, a public school in the Crown Heights section of Brooklyn, formally known as the Pathways in Technology Early College High School.

P-TECH — a collaboration between New York City’s education department, the City University of New York and IBM — is a six-year school that allows students to earn both a high school degree and either an associate degree or two years of college credit. Students are paired with corporate mentors, and the best-performing graduates are offered a job at IBM.

The school is part of a larger trend in high school education that aims to be more intent about preparing students for college or a career straight out of high school. P-TECH in particular has gotten a lot of attention since its opening in 2011, including a shoutout in President Obama’s 2013 State of the Union address and his visit to the school later that year. The school is particularly notable for having a student body that is 96 percent black and Hispanic, groups that have traditionally lagged behind in getting postsecondary degrees and technology jobs. Eighty percent of its students receive free or reduced-price lunch, according to IBM’s data.

Theoretically, these schools help boost college and career readiness by exposing students to the technology skills necessary for each while they’re still in high school. But how effective are they? Since P-TECH’s first class of alumni is fresh off the graduation stage (two years early, no less), we’re only now starting to be able to determine how well the school can achieve its goals.

“Any single cohort [of the early college high school model] has four to six years to graduate and earn an associate degree, so you’d have to wait at least that long” to determine the success of the program, said Casey Cobb, associate dean and professor of educational leadership at the University of Connecticut. “After that, employment will be important to track longitudinally, at least two to five years out after they leave the program, to find where the students are.”

Although P-TECH is new, there have been similar models for decades, but there’s been relatively little research on how well these schools’ students perform relative to their counterparts who pursue a more traditional high school education. The most recent comprehensive study was conducted in 2013 by the American Institutes for Research, which found that students from early college high schools were significantly more likely to attend college after their high school graduation. (The study covered three consecutive ninth-grade cohorts starting with students who were ninth-graders in 2005. The study period ended in 2011.) 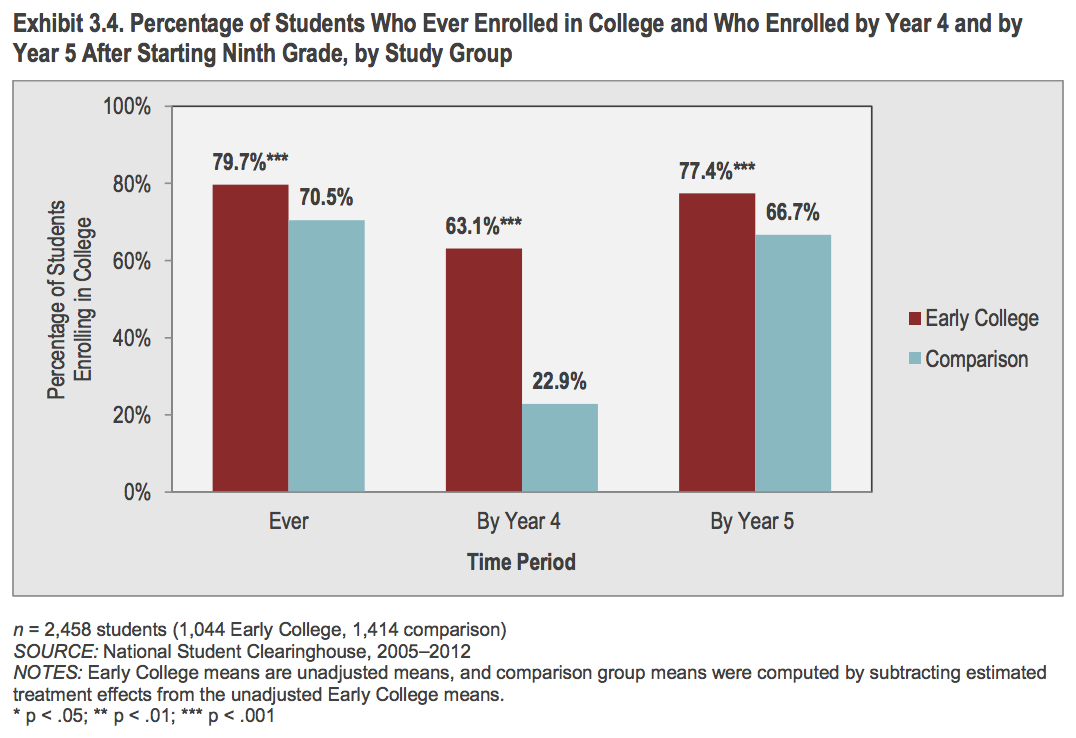 The paid internships and professional mentorship that P-TECH provides set it apart from other schools in the model. The difference is intentional — rather than setting a goal of a bachelor’s degree for every student, the committee that designed the school looked at what’s necessary to be successful in the technology industry and worked backward to determine what should be incorporated in the students’ high school experience. Anecdotally, it seems that P-TECH is doing a good job of preparing its students for the workplace.

“We asked students’ [internship] supervisors at IBM if they were comparable to other interns,” said Stanley Litow, IBM’s vice president of corporate citizenship and corporate affairs, noting that these were the company’s first high school interns. “We asked them to rate the P-TECH students, and they were rated on par with interns we had working for us who were juniors in college.” 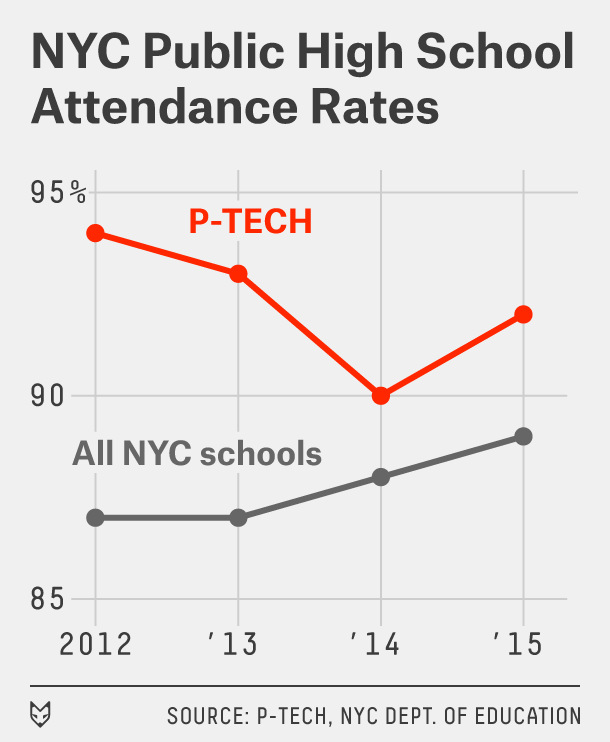 We’ll have to wait to get a long-term sense of how P-TECH’s graduates perform, but in terms of data available now, proficiency rates compared with other New York City high schools1 seem to indicate that P-TECH is doing something right. The most recent data available for all New York City high schools is from the 2012-13 year, in which 74 percent of students were deemed proficient in English language arts after four years of instruction, and 77 percent were deemed proficient in math. As of now,2 81 percent of P-TECH’s first four-year cohort3 is proficient in English language arts, and 83 percent is proficient in math. P-TECH’s attendance numbers are also above average for the city.

Andoh and Saddler believe they are bona fide evidence of the model’s success.

“I’m coming from a low-income family, and if you do the math, I probably wouldn’t finish college,” said Saddler, who will be working at IBM. “I’d be able to go, but because college is so expensive, I probably wouldn’t be able to finish. And so to have the blessing of not needing to pay for an associate’s degree and have a job with a Fortune 500 company — why shouldn’t this be replicated? This is a great opportunity.”

At the White House on Tuesday, the two students will participate in a discussion on career and technical education with industry leaders, policymakers and education officials.

The discussion highlights a problem that our education system has struggled to solve so far. According to a 2015 report from the Organization for Economic Cooperation and Development, the United States is in the bottom 25 percent of countries in both how skilled its young people are and how well students can develop those skills. Could P-TECH — and other programs like it — be the way forward for American education reform?

“I think people are hungry for fresh perspectives on career readiness and high school reforms,” Cobb said. “High schools have been slow to change. So the fact that this is breaking the barrier of the transition between high school and college in a particular school setting is novel. I think there’s really strong potential for this model to grow.”

Since the Brooklyn school’s opening in 2011, the model has grown rapidly. There are now 37 P-TECH schools in New York, Chicago and Connecticut. Next year, that number will grow to 100, and there will be just as many businesses partnering with the schools.4 The companies — partners such as Verizon and Con Edison as well as smaller regional businesses — cover a range of industries including IT, health, advanced manufacturing and energy. Although the model needs to be tailored to best serve individual communities, the core components stay the same.

“If you’re opening a P-TECH school in New York City versus Norwalk, Connecticut, where the school is in the basement of an existing high school, certain things you’re going to have to modify and do differently,” Litow said. “But on the other hand, certain core elements like having an unscreened program, mentoring, paid internships are nonnegotiable. So in that way, I would say all of the schools are pretty close to the model.”

The Norwalk school that Litow mentioned — Norwalk Early College Academy — opened in that basement last year, and despite its challenges, the school’s director, Karen Amaker, is pleased with the first cohort’s progress.

“I’m surprised — pleasantly — by some of the results we’ve seen thus far from our students,” Amaker said. “Our students are placing into college classes like college algebra and English composition, so I now have the pleasure of creating a schedule that allows for college courses as early as 10th grade. It’s a challenge, but it’s a really nice problem to have.”

The longer-term questions have yet to be answered. How likely are these students to graduate on time? How likely are they to continue their education and get a bachelor’s degree? What’s their average salary after one year in the workforce? Two years? Five years?

“You have to be practical about any kind of reform,” Litow said. “There’s no such thing as a magic bullet. No one wants to say that we finally found the answer. But the economy has changed dramatically, and we do need to find a way to ensure that students are graduating with a degree and with the proper skills. We need to find that kind of sweet spot, and that’s what we’re trying to do.”