Until the black box is recovered from AirAsia flight QZ8501, we won’t know what caused it to crash into the Java Sea on Dec. 28.

One factor that may have put the flight at a safety disadvantage before it took off is the country it left from. Indonesia has by far the poorest oversight of aviation safety of any of the world’s major countries, according to the United Nations agency for civil aviation — and the latest audit, eight months ago, suggests it’s heading in the wrong direction.

For the last 16 years, the International Civil Aviation Organization has audited countries’ laws and resources for regulating air safety. Auditors have sought to answer such questions as: Is the country’s oversight body free from political influence? Does it have enough qualified staff to assess airlines? Are airlines sufficiently disciplined when they are in breach of safety rules?

A year ago, Indonesia rated above average. Then, last May, the ICAO audited the country. The results were abysmal. Indonesia rated below average in all eight categories, including legislation, operations and airworthiness. The organizational structure of its civil aviation rated well below average, scoring 18 percent compared to a global average of 65 percent.

Indonesia’s overall score places its safety oversight system in the bottom quartile of the 187 countries evaluated by the ICAO. It’s also one of the busiest countries in the world for air traffic. In 2013, the most recent year available, airlines registered in Indonesia carried 85.1 million passengers, according to the World Bank and the ICAO. That’s the eighth-highest total in the world,1 not surprising for the world’s fourth most populous nation, which is also an archipelago. 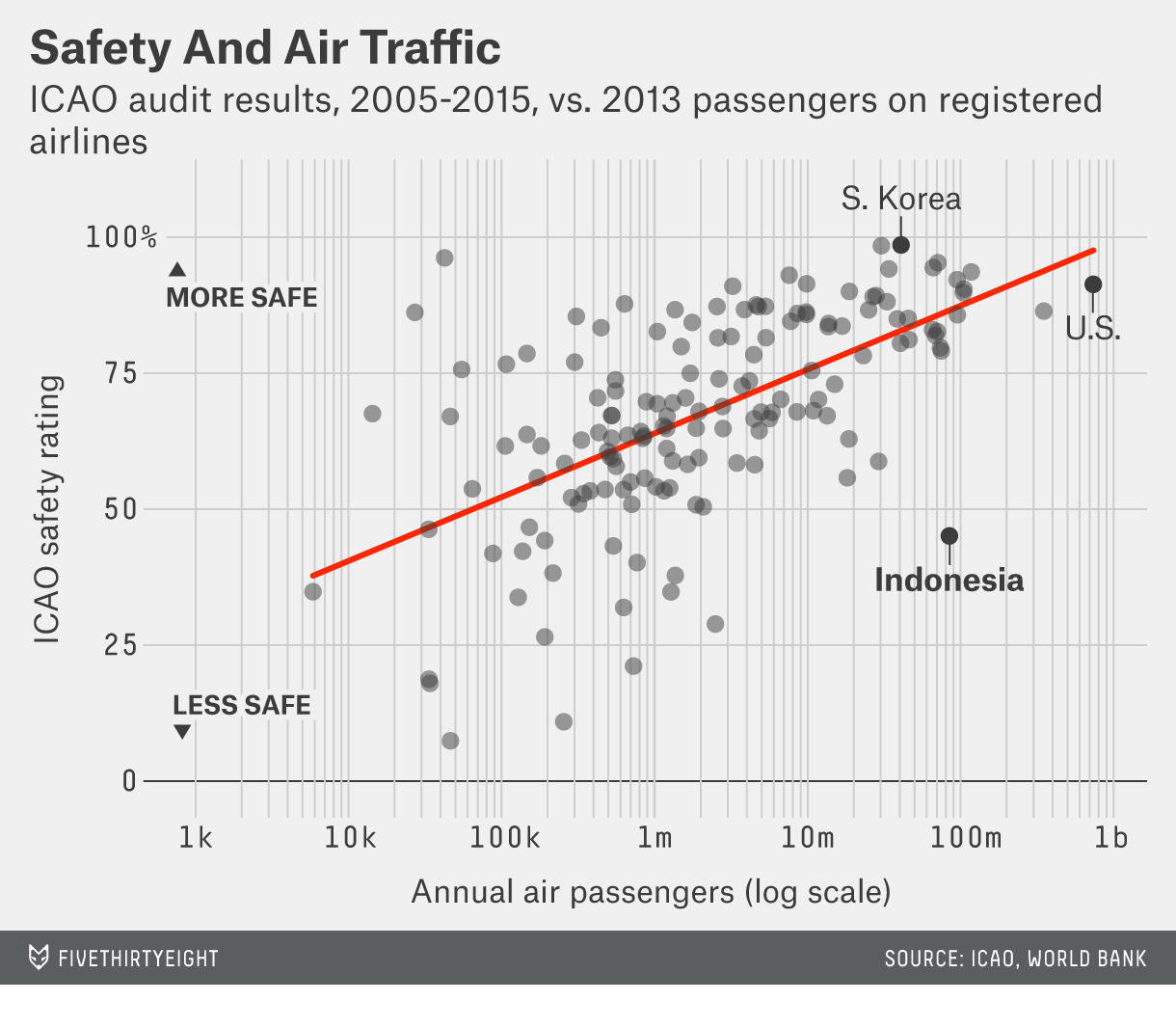 In general, countries whose airlines carry more passengers have higher safety ratings. Indonesia is the major, and troubling, outlier. It’s the only country that ranks in the top 23 for air traffic — those with airlines carrying at least 30 million passengers in 2013 — that landed in the bottom half of safety oversight ratings. And it’s the only country in the top 70 in air traffic — more than 2.6 million passengers — to fall in the bottom quartile of safety oversight ratings.2 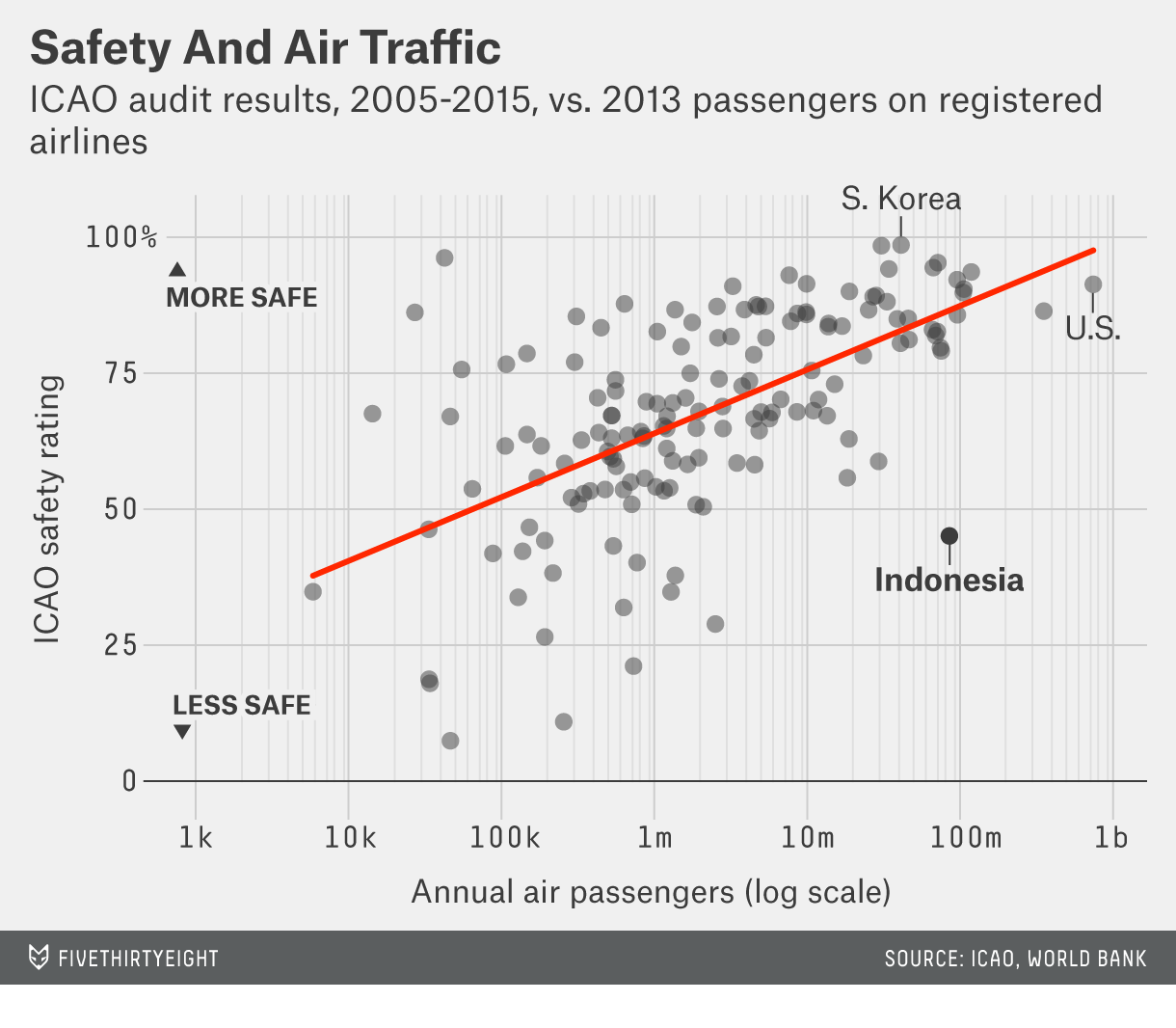 The U.S. agency that oversees air safety agrees that Indonesia’s safety oversight is inadequate. The Federal Aviation Administration conducts its own audits of countries with airlines that operate in the U.S., want to do so, or that codeshare with U.S. carriers. In March 2007, the FAA announced that Indonesia doesn’t meet ICAO standards, a finding that remains unchanged today. That makes Indonesia one of just nine places in the world the FAA has deemed unfit to oversee airlines carrying passengers to or from the U.S., and one of just two (along with India) in the top 70 in global air traffic.3 The FAA restricts the ability of air carriers from places that flunk its inspections to fly to and from the U.S.

Regulators stress that these ratings don’t cover the safety practices of airlines, airports and private companies that manage flight traffic, known as air navigation service providers. For that reason, as well as the lack of evidence about what brought down the Indonesia AirAsia flight, it’s too soon to link Indonesia’s poor audit scores with the disaster that is presumed to have killed all 162 people on board.

“AirAsia is an open accident investigation and it would be inappropriate to comment on any possible causes,” FAA spokeswoman Alison Duquette said in an email.

“I don’t see it being contributory or directly related” to the crash, Andrew Herdman, director general of the Association of Asia Pacific Airlines, a trade group, said of Indonesia’s poor ICAO audit results. He added that airlines with high safety standards often get unfairly tarnished because of their countries’ records. “One of the frustrations is, you can be an airline operating to the best international standards, but you may be registered in a country that has relatively poor performance in regulatory oversight,” he said in a telephone interview. That can subject airlines to sanctions, such as FAA restrictions and bans of airlines by the European Union based in part on their countries’ safety oversight systems.

There are, nonetheless, already indications that lax oversight played a part in AirAsia flight QZ8501. The flight took off without the necessary clearances from regulators, the acting head of Indonesia’s transportation ministry said, according to the Associated Press. Djoko Murjatmodjo said his ministry was ordering the suspension of officials involved. He added, “Who knows if other airlines are also doing the same thing?” and announced new measures aimed at ensuring the agency knows whether other airlines are violating rules.4

Herdman emphasized that air safety, overall, has been increasing steadily over the last few decades. “If you’re doing a real analysis of risks and threats, what really stands out is that flying is really safe,” he said. “Probably the most dangerous part of an air journey is the ride to the airport.”

The decline in the number of annual aviation accidents has been good for passengers and for the industry, but has made data analysts’ work harder. They can’t simply add up major accidents and divide by flights or miles traveled. It’s impossible to evaluate any country’s or airline’s safety purely by its accident rate because the number of crashes is too small to be statistically meaningful. Indonesia AirAsia had never had a crash before this one. AirAsia didn’t respond to email inquiries about Indonesia’s audit results.5

Because accident rates themselves aren’t sufficient, audits can be useful supplementary tools for evaluating safety. New safety ratings out this week from AirlineRatings.com take into account airline audits by the International Air Transport Association, a trade group.

Indonesia’s challenges with air safety oversight are typical of those in poor countries,6 Herdman said. It’s difficult for the government to compete with the private sector for qualified staff, and it has other spending priorities, in health care and education. Also, in Indonesia, “It’s a huge sector growing very, very rapidly,” Herdman said. “That does lead to challenges.” The annual number of passengers carried by Indonesia-registered airlines more than tripled between 2009 and 2013.

“Many leadership positions have been taken by those without the right competence, or the wrong man [in] the right place,” Saleh Husin, a member of Indonesia’s House of Representatives, said last year about Indonesia’s poor audit results, according to the publication Bisnis Indonesia.

Indonesia’s ratings could be worse. It isn’t one of the dozen countries that ICAO has determined has at least one of what it calls Significant Safety Concerns.7 That means ICAO thinks the government’s oversight of some aspect of aviation — such as airlines or airports — is too weak to ensure that ICAO standards are being met.

While Indonesia’s ratings are poor, its problems appear to stop at its borders. Herdman points out that the highest rated country by ICAO is South Korea. China, Japan, Hong Kong, Mongolia and Singapore — the scheduled destination of the downed AirAsia flight — also all rank in the top quartile of the ICAO rankings. Africa, not Asia, presents the most serious problems. It has far more low-rated countries for oversight quality, including the lowest-rated in the world, Djibouti (4 percent). No country scores 100 percent. South Korea gets nearly 99 percent; the U.S., 92 percent.

“Of course, no one’s perfect, so what you have is a wide range of degrees of compliance,” Herdman said.

The airline industry typically seeks less regulation, for matters such as pricing and taxes. But the Association of Asia Pacific Airlines lobbies for more regulation when it comes to oversight, Herdman said. “We have drawn attention to the fact that we need good regulatory oversight,” he said. “It’s a way to guarantee safety and provide assurance that basic standards are being maintained.”

Two factors limit the usefulness of these safety oversight audits: recency and transparency.

Audits are difficult and time-consuming, for the auditors and the auditees. The FAA has announced results of barely a dozen audits since 2007. The ICAO has been auditing using its current methods for the last decade, and most countries haven’t been audited more than once during that time, ICAO spokesman Anthony Philbin said in an email. It has sought to keep the audit results more current with its move, in 2011, to a continuous monitoring approach, such as followup visits to see if deficiencies identified in audits have been addressed.

Results of audits also typically aren’t shared with the public, beyond summary scores or findings. The ICAO, the FAA and the European Aviation Safety Agency all declined to disclose further details of their inspections, citing confidentiality agreements with the states they’ve evaluated. Knowing full results will be published could deter countries from cooperating. “We never discuss the specific finding of any” international safety audit, Duquette, the FAA spokeswoman, said. “That is the purview of the country being assessed.”

“We as an association have no access to the information,” Herdman said. “Even airlines were unable to access the information. We’ve been campaigning for more transparency.”