While Washington was busy debating whether or not to sabotage the recovery by failing to raise the federal debt ceiling, the economy seemed to be doing everything in its power to demonstrate that it’s in feeble health to begin with.

Leading indicators, like an index of manufacturing activity, have printed poorly, about at the levels that suggest the economy is on the brink of another recession. Although bearish economists have been warning about recession risk for some time now — and looking the wiser for it — concerns about a double-dip have crossed into the mainstream. The Harvard economist Martin Feldstein thinks there is a 50-50 chance of another recession. We may even be in a recession right now.

In some sense, however, this is beside the point. The American economy lost a ton of ground during the global financial crisis. Slipping back into a recession — meaning negative growth — obviously wouldn’t help matters at all. But neither, really, would slow growth of the sort we’ve experienced during the first half of the year.

In the chart below, I’ve plotted the United States’s gross domestic product, adjusted for inflation, dating back to 1877. The data incorporates the recent substantial downward revisions to G.D.P., which suggested both that the economic crash was even worse than economists had previously believed — at one point, G.D.P. was declining at an annualized rate of nearly 9 percent — and that the recovery has been even more timid. 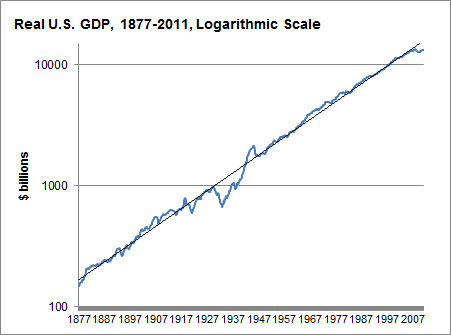 G.D.P. is plotted on a logarithmic scale in the chart, which reflects the fact that, over the long-run, the American economy has been growing exponentially. The rate of growth has in fact been quite steady over the long run: since 1877, the annual rate of G.D.P. growth has averaged about 3.5 percent after inflation. There has also been strong a tendency for these numbers to revert to the mean: periods of above-average growth have generally been followed by periods of below-average (or negative) growth, and vice versa.

So far, however, there hasn’t been much of a rebound from the Great Recession. In the next chart, I’ve plotted how far ahead or below of the long-term trend that the economy is at any given time. Basically, instead of thinking about the economy in terms of the rate of growth, we’re instead thinking about how strong or weak it is in an absolute sense. An economy may technically be out of recession — meaning, that it is no longer shrinking — while still being well below its productive capacity. 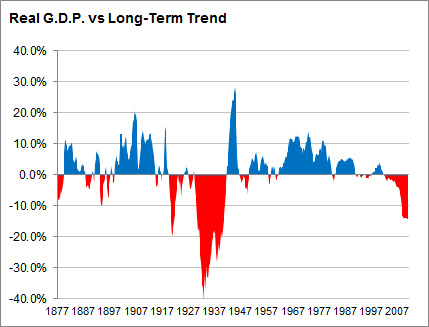 Here, you can really see the effects of the Great Depression. In early 1933, G.D.P. was about 40 percent below what it “should” have been based on long-term growth rates. But the economy recovered at a rapid clip over the course of the next decade. In fact, G.D.P. temporarily overshot, exceeding the long-term trend during World War II as America employed all the industry and labor that it could get its hands on to help with the war effort.

By this measure, most post-World War II recessions are barely detectable. They look more like reversions to the mean after years of above-average growth.

The Great Recession, however, is highly visible. G.D.P. had already been a couple of percentage points below the long-term trend before it began, as the recovery from the 2001-2 recession was not particularly robust. But things got much worse in a hurry.

Looked at this way, in fact, not only is the worst not yet over — the situation is still deteriorating. Every quarter that the economy grows at a rate below 3.5 percent, it loses ground relative to the long-term trend. Although the economy grew at a 3.8 annual percent rate from fall 2009 through summer 2010, over the past year growth has averaged just 1.6 percent, putting us farther behind.

Right now, gross domestic product is about $13.3 trillion dollars, adjusted for inflation — when it “should” be $15.7 trillion based on the long-term trend. That puts us more than 15 percent below what we might think of as full output, by far the worst number since the Great Depression.

If the economy were to enter another recession and shrink by 1 percent over the course of the next year, we would wind up 19 percent behind the long-term trend. But even if it were to grow at 2 percent, we would still be 17 percent behind.

What we need, instead, is above-average growth — in fact, quite a lot of it. Even if the economy were to begin growing at a 5 percent annual rate, it would take until 2018 for it to catch up to the long-term trend.