These having been a slow couple of weeks in politics, I’ve been trying to educate myself a little bit on the very fascinating debate surronding high-speed rail, which received $8 billion in funding in the stimulus package. I’ve come to some fairly substantive conclusions that I hope to share with you over the next week or two — but in the meantime, it’s worth thinking about how Americans travel currently.

One fascinating statistic, for instance, which I found in a 2001 survey by the Department of Transportation: about 90 percent of Americans’ trips of 50 miles are more are made by personal vehicle rather by plane or by other means.

Now, this somewhat oversells the story: trip frequency resembles a gravity function, with trips becoming exponentially less likely with increasing distance. Of all trips at a one-way distance of 50 miles or more, the average distance traveled is only about 260 miles, and the median is closer to 100. Distances of that magnitude are fairly easily negotiable by car.

Even among truly long-distance trips with a one-way distance of between 500-1000 miles, however, a majority (54 percent) are made by car, versus 42 percent by air. Taking the raw data from the survey and using it to plot a smooth function, we wind up with the following: 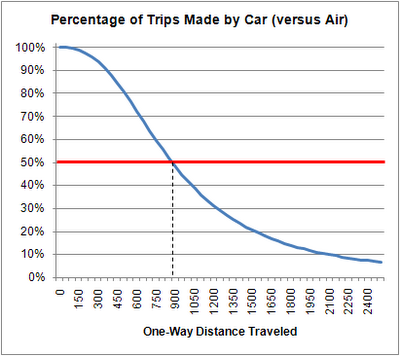 The breakeven point here is at about 875 miles — that’s when a typical American is equally likely to make a trip by plane as by car. (Note: the chart above excludes the small percentage of trips that are made by bus, train or other means.)

875 miles happens to be about the travel distance from St. Louis to New York City. To me, it seems pretty insane, under most circumstances, for a St. Louisan to choose to drive his trip to New York rather than to fly it.

Let’s consider, indeed, the costs of flying from St. Louis to New York. Imagine that we have a solo traveler making a three-day business trip and staying at a hotel in Midtown Manhattan:

* The prevailing price of a non-stop, round-trip ticket from St. Louis to New York these days is about $250.
* In addition, assuming a 3-night stay, you’ll pay about $35 in long-term parking fees at Lambert Airport in St. Louis.
* Assuming a 20-mile trip to and from your home in St. Louis to the airport, you’ll also spend the equivalent of about $15 in mileage costs to make this trip to and from the local airport (I’ll explain in moment how I calculate this number).
* A cab from LaGuardia to Midtown Manhattan wil run you about $40, assuming some traffic. You have to take a cab both to and from LaGuardia, so this is a total of perhaps $80.
* Finally, once you’re in Manhattan, let’s assume that you’ll incur about $75 in additional transit fees (cab fares and public transit) that you could have avoided if you’d had your car with you.

Now, how much would it cost to drive from St. Louis to New York?

* The AAA estimates that the cost to drive a typical American sedan is about 52 cents per mile. However, this includes some fixed costs — like insurance — that don’t depend on how frequently you drive. If we strip these out, the true, marginal cost of driving is about 36c/mile. An 875-mile one-way journey equals a 1,750-mile roundtrip, which means that it will cost you the equivalent of $630 to operate your car for this length of time.
* You’ll also have to park your car for three nights. If you’re fairly lucky, you might be able to get away with doing this for $70 in a Midtown Manhattan garage.
* Finally, you’ll need to drive your own car around Manhattan as desired. Let’s say that another 15 miles go on your odometer as a result; this comes at a cost of about $5.

The cost of driving to and from St. Louis is $705. So you’re already paying about $250 more to drive than you would to fly.

And that’s before considering the time savings from flying. Certainly, there are a lot of “hidden” time costs associated with air travel. You’ll have to arrive at the airport about an hour early to board early and get through security. It might take you half-an-hour to drive to the airport, and another half-hour to drive from the airport to your hotel once you’ve arrived at LaGuardia. You’ll need to wait a quarter-hour or so to pick up your luggage, and maybe another 15 minutes or so to arrange local transit. Let’s also build in another 15-minute fudge factor for delays. All of this, in addition to the listed flight time of about 2.5 hours (which already includes an ample allowance of tarmac time), means that the door-to-door journey will probably take you something like 5-5.5 hours.

But driving from St. Louis to New York, assuming an average travel speed of 65 MPH, will take you about 13 hours. If you value your time at $30 an hour, the net cost of driving rather than flying to St. Louis works out to the equivalent of another $260. That makes flying roughly a 2:1 bargain over driving: $475 in time and expenses versus $970.

Now, certainly, a one-size-fits-all approach isn’t perfect here. If, for instance, this is a personal rather than a business trip and you have your kids along with you, driving will be much more competitive. It’s not particuarly more expensive to drive four people 875 miles than to drive one (unless you’re considering the extra time wasted), whereas each additional passenger requires you to purchase a separate airline ticket. If you’re uncomfortable using taxis and public transit, meanwhile — or were traveling to a city that didn’t have them in such abundance as NYC — you’d probably have to rent a car instead, which is a pretty big marginal expense.

Still, I’d expect the numbers for most 875-mile trips to be slanted fairly heavily in favor of air travel — but instead, Americans are just as likely to drive this distance as to fly. There are, I believe, two reasons for this.

The first has to do with the nature of people’s mental accounting. When people think about the costs of driving to St. Louis to New York, they probably think about the price of gas, but don’t go much beyond that. In fact, gas is a relatively small piece of the puzzle: about 10c per mile. It’s the other costs — maintenance, tires, and especially depreciation — that are the killer. Consider: if you buy a car for $25,000 that you’re hoping to operate for 100,000 miles, this means that your paying about 25c per mile of travel. You probably forget about this cost since you’ve paid for your car up-front. But the 1,750-mile round trip from St. Louis to New York is 1,750 miles sooner that you’ll have to replace your vehicle — this alone costs you $437.50, almost $200 more than the round-trip airfare!

The other factor is that a lot of Americans don’t like flying — they either find the experience unpleasant or are afraid of it. A 1999 poll from ABC News found that 14 percent of Americans are very afraid of air travel, and another 29 percent are somewhat afraid of it. These Americans take substantially fewer journeys by air than do those who don’t fear flying: a reasonable extrapolation from ABC’s numbers is that there’s about 20 percent less aggregate air traffic than there otherwise would be if nobody were afraid of it.

In addition, some people might not be afraid of air travel, but may nevertheless find the experience unpleasant. A 2008 survey from the Travel Industry Association found that about 41 million air travel round-trips were avoided because people found the experience irksome: this is about 10 percent of the total number of domestic round-trips in a typical year. Thus, between the fear and other unpleasantness that people associate with commercial air travel, it occurs about 30 percent less often than it otherwise might.

What does this mean for something high-speed trains? It could be either good news or bad news. If a people are driving more than they “should” because they don’t like air travel, then trains could pick off quite a bit of that traffic. A “true” high-speed train from St. Louis to New York, traveling at 150 MPH, could make the journey in just under 6 hours, which is quite competitive with air travel once the additional door-to-door costs of air transit are considered (although there are some incumbent to rail travel too). And many of the hang-ups that people associate with air travel, indeed, aren’t likely to transfer to rail. Train travel can often be quite comfortable, for instance, and acrophobes won’t have to worry about being suspended 30,000 feet above the ground in a flying cigar box. On the other hand, if people are attached to driving for “irrational” reasons — they find it romantic or improperly evaluate expenses like depreciation — rail travel might not make much of a dent.