With President Obama’s second term under way, we have begun to see more reflections on how he might come to be regarded historically.

As common sense might dictate — and as the statistics will also reveal — it is far too soon to conclude very much about this. Second-term presidents may be derided as lame ducks, but it is often in the second term when reputations are won or lost.

Still, we can say this much: Mr. Obama ran for and won a second term, something only about half of the men to serve as president have done (the tally is 20 or 21 out of 43, depending on how you count Grover Cleveland). We can also note, however, that Mr. Obama’s re-election margin was relatively narrow. Do these simple facts provide any insight at all into how he might be regarded 20, 50 or 100 years from now?

In fact, winning a second term is something of a prerequisite for presidential greatness, at least as historians have evaluated the question. It is also no guarantee of it, as the case of Richard M. Nixon might attest. But the eight presidents who are currently regarded most favorably by historians were all two-termers (or four-termers, in Franklin D. Roosevelt’s case). 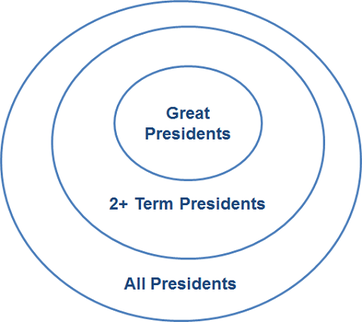 The rankings I will refer to here come from a composite of the four most recent surveys in which presidential scholars were asked to rank the presidents. (The surveys were conducted between 2008 and 2011). I’ve averaged the rankings among the four surveys and then re-ranked the presidents from 1 to 43 accordingly. (Ties are broken by the best median ranking; Cleveland is counted only once for these purposes.) 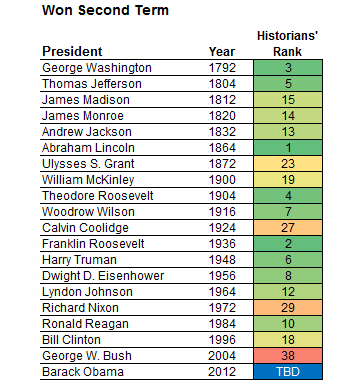 We might divide the presidents into three basic groups: good (those who rank in the top 15), poor (those in the bottom 15) and average (everyone in between).

Of the 19 presidents before Mr. Obama to successfully defend their first term (this definition excludes Cleveland), 13 are regarded as good, four as average and just two as poor (Nixon and George W. Bush; Calvin Coolidge is a borderline case). So at first blush, Mr. Obama’s odds of being regarded well by history seem pretty favorable.

Another 10 presidents were nominated by their parties for a second term but lost in the general election. The highest-ranked among these is John Adams, the second president and the first one to lose his re-election bid. But he rates as just the 16th-best president according to the historians, right on the fringe between average and good. 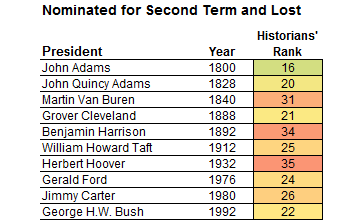 At the same time, while none of the presidents from this group are regarded as having been great, relatively few have terrible reputations. Only three of the 10 — Martin Van Buren, Benjamin Harrison and Herbert Hoover — have a ranking in the 30s, and none is lower than 35th place.

So where do we find the worst-rated presidents? They instead come from the list of those who not only failed to win a second term, but who didn’t even bother to try, or were disallowed the opportunity to do so.

Eight presidents were alive at the end of their first terms but either didn’t seek another nomination or weren’t chosen by their parties. Of these, only James K. Polk rates as an above-average president; the rest range from mediocre to terrible, including three of the worst-regarded presidents: Andrew Johnson, Franklin Pierce and James Buchanan. 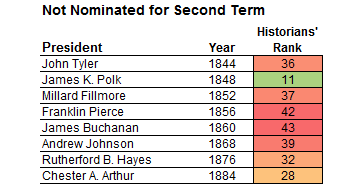 Polk, who maintained a one-term pledge, doesn’t really deserve to be lumped in with this group. Nor, probably, does Chester A. Arthur, who was in poor health at the end of his term and died less than two years after it ended. More were like Pierce, who sought the Democratic nomination in 1856 and was denied it, despite having won in a near-landslide four years earlier. All eight of the presidents in this group served within a narrow window of about 40 years between 1841 and 1885; the Civil War came right in the middle of that period. (Fortunately, so did Abraham Lincoln.)

Finally, there were five presidents who died during their first terms. It is hard to know how to rank them, particularly William Henry Harrison, who survived for just 32 days into his presidency. However, when asked to do so, historians have viewed four of the five unsympathetically. The exception is John F. Kennedy, whom the historians rank ninth overall.

I recognize this might be an unpopular position, but one can ask if there is some inconsistency here: whether Kennedy has been ranked so highly based more on his potential than his actual accomplishments.

No, there is no presidential equivalent to Value Over Replacement Player, the baseball statistic that accounts for both the quality of a player’s performance and the amount of time that he served. (I’d nominate Millard Fillmore as the presidential equivalent of Mario Mendoza). But the presidential scholars do implicitly seem to be applying something like that standard: Harrison, who accomplished almost literally nothing, is not regarded as average but instead as the fourth-worst president. (Put another way, only three presidents’ accomplishments are regarded as having been worse than nothing.) If that is the measure, it is hard to see how Kennedy is ranked similarly to Dwight D. Eisenhower by the historians, when Eisenhower had a very popular and productive presidency and served for almost three times as long.

Mr. Obama, barring tragedy or resignation, will get to serve eight years, but his margin of victory last November was not overwhelming. He won 62 percent of the electoral vote, which ranks 16th among the 30 presidents who sought re-election after their first terms. Mr. Obama’s electoral vote percentage was better than any of the 10 first-term losers, of course — but among the 20 winners, it exceeded only James Madison in 1812, Woodrow Wilson in 1916, Harry Truman in 1948 and George W. Bush in 2004. 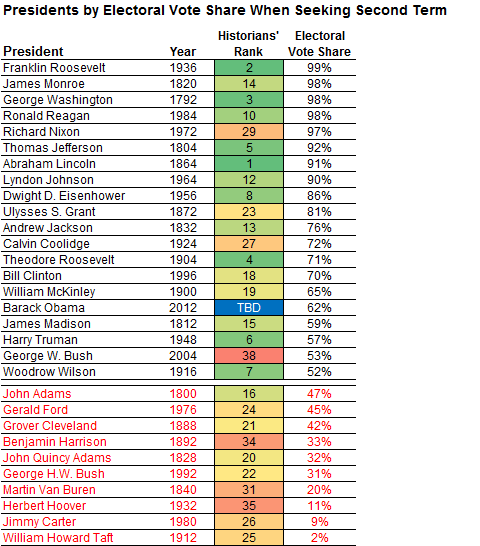 Most of the best-regarded presidents have won more overwhelmingly than that; four of the top five won at least 90 percent of the electoral vote in their second-term bid. (The one left out was Theodore Roose
velt, who won the popular vote by 19 percentage points in 1904 but lost almost all of the South in the Electoral College.)

However, there are some presidents who break the pattern. Nixon won re-election with 97 percent of the electoral vote in 1972, but is regarded as a poor president. Truman and Wilson won quite narrowly, but are now regarded as good ones. 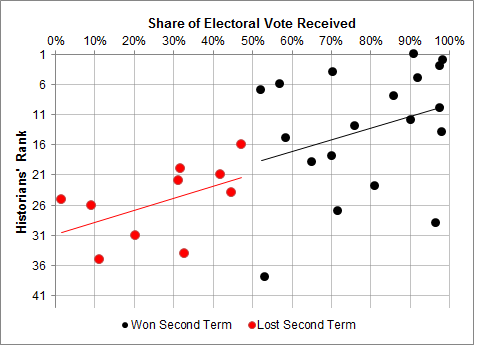 Over all, there is a positive relationship between a president’s performance in the Electoral College when seeking a second term, and how the historians have ranked him. (The regression line in the chart below predicts that Mr. Obama will eventually come to be regarded as about the 17th-best president, somewhere on the boundary between good and average.) But it is an extremely rough guide — especially for the presidents who are successful in winning a second term, and who have an opportunity to enhance or undermine their reputations. Voters may judge a president’s first term, but history will judge his second.