David Cameron’s Conservatives now project to win 308 seats in the House of Commons on Thursday, according to our latest projection model; this reflects a gain of 9 seats from the total of 299 that we had projected them at four days ago. Labour’s projected total is barely changed — 198 seats rather than 199 — while Liberal Democrats now project to win 113 seats, down from 120 last week. 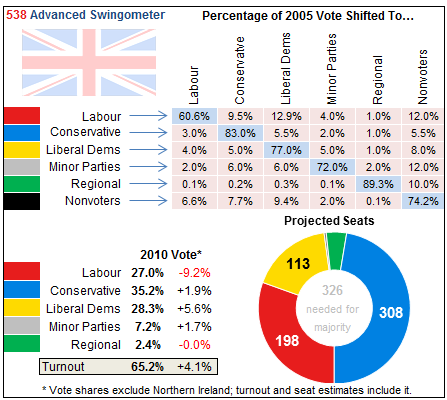 Our model is now calibrated such that the overall popular vote projection reflects an “average of averages”: specifically, the polling average as calculated on UK Elections Report, averaged with the one calculated by Robert Ford’s team at PoliticsHome. We have also added in several recent polls from Scotland and Wales to refine our regional model. Finally, we have removed the incumbent retirement penalty as we are no longer satisfied that it is a robust effect.

If seats in the House of Commons are distributed exactly as our model suggests, it would create an unusual situation in which Conservatives alone could not form a majority, but Labour and Liberal Democrats could also not combine to form a majority. My personal view is that the most likely outcome of such a scenario would be a Conservative minority government, possibly followed by new elections in relatively short order as Conservatives sought to win an outright majority.

Bear in mind that our model methodology is controversial and unproven. On the other hand, traditional methodologies like uniform swing — which would project more modest gains by Conservatives and Liberal Democrats — are in my view also controversial and unproven. Betting markets, on the other hand, actually forecast more gains than this by Conservatives, but fewer by Liberal Democrats.