I had a brief discussion yesterday with a pollster, who asked me what I thought the chances were that Obama’s speech on Wednesday night would increase approval for the Democratic health care package by 5 or more points.

I told him I’d give him even money. The pollster was quite a bit more skeptical, assigning not more than a 10 percent chance, and pointing out that it was mostly a Democratic audience that had watched Obama’s speech — an audience that presumably had supported the health care initiative already.

There is, indeed, some evidence that Democrats watched the speech in greater numbers than Republicans. And Democrats, of course, are more likely to have supported the President’s health care plans in the first place.

But that doesn’t mean that there are no swing votes are to be had among Democrats. On the contrary, they may be exactly the group that Obama had to persuade.

Take a look at the following: 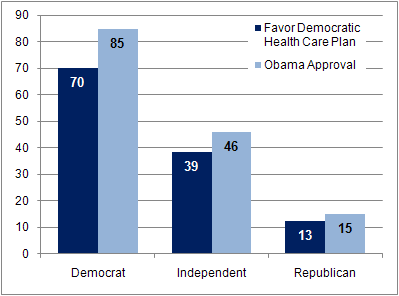 On the one hand, we have Obama’s approval ratings among the two major parties, as well as among independents, as taken from Pollster.com’s latest partisan breakdown. On the one hand, we have approval ratings for the Democrats’ health care bill, taken as a straight average of four recent (although pre-speech) polls — Rasmussen, Pew, PPP and YouGov — which provided partisan ID cross-tabs.

Although Democrats are quite naturally more inclined to have been supporters of the health care to begin with, their support — about 70 percent — lags well behind their overall approval of Obama, which still registers at about 85 percent. This 15-point gap is significantly larger than the one among independents (7 points) or Republicans (neglible).

The assumption I think we can make is the following: the most persuadable voters on health care — the lowest-hanging fruit — are people who still approve of the President but feel lukewarmly (or worse) toward his health care bill. Obama still has a lot of credibility with these people, and health care has become so central to his mission that it would seem that one or another of these things has to give: either their questions about health care will lead them to become disillusioned with Obama in general, or the health care numbers are due to bounce back.

After Wednesday night’s speech, I think the latter possibility — the health care numbers inching back toward Obama’s overall approval rating — is more likely. And the people with whom he has the biggest gap to close are not Republicans, not independents — but Democrats.

These objections don’t appear to be from liberal Democrats, by the way, who might think that Obama’s health care bill is too weak. Rasmussen, in their most recent poll on the health care bill, looked not just at the partisan ID breakdown but also the ideological one. 87 percent of liberals support the plan, a far better number than the one Rasmussen showed (72 percent) for Democrats as a whole. It would seem, therefore, that it’s primarily moderate-to-conservative Democrats who are most skeptical (relatively apeaking) about health care reform. If Obama has moved the numbers with this group, that would relieve a lot of the pressure on Democratic Congressmen in swing districts who fear that they’re damned if they do support the President on health care reform, but also damned if they don’t.