New Jersey Gov. Chris Christie’s bid for the presidency, which officially began Tuesday morning, is likely to fall off the George Washington Bridge and end up in the Hudson River. Christie, who was at one time seen as a potential front-runner, has run into not one, not two, not three, not four, but arguably five problems in his bid for the presidency.

Problem 1: Christie is too moderate.

My colleague Nate Silver has pointed out that Christie’s ideological scores, based on public statements and his donors, make him more liberal than all the other serious Republican candidates except George Pataki. He is also considerably further left than other recent Republican nominees and Congress overall. To be moderate when both parties are moving toward their wings is not a good strategy.

There had been a thought, however, that Christie could overcome his moderate record by attacking Democrats and Democratic groups, as he has done in town hall meetings. This would make him seem more conservative than his views on the issues suggest.

It was an interesting theory when it surfaced a few years ago, but Christie’s actions haven’t fooled anyone. Republicans are quite aware that Christie and Pataki are more liberal than the other GOP candidates. Earlier this month, YouGov asked Republicans to place their candidates on a scale from 0 to 100, with 0 being the most liberal and 100 being the most conservative. Christie and Pataki both scored a 48, by far the most liberal in a 15-candidate field. (Mike Huckabee was the most conservative, with a score of 74.) 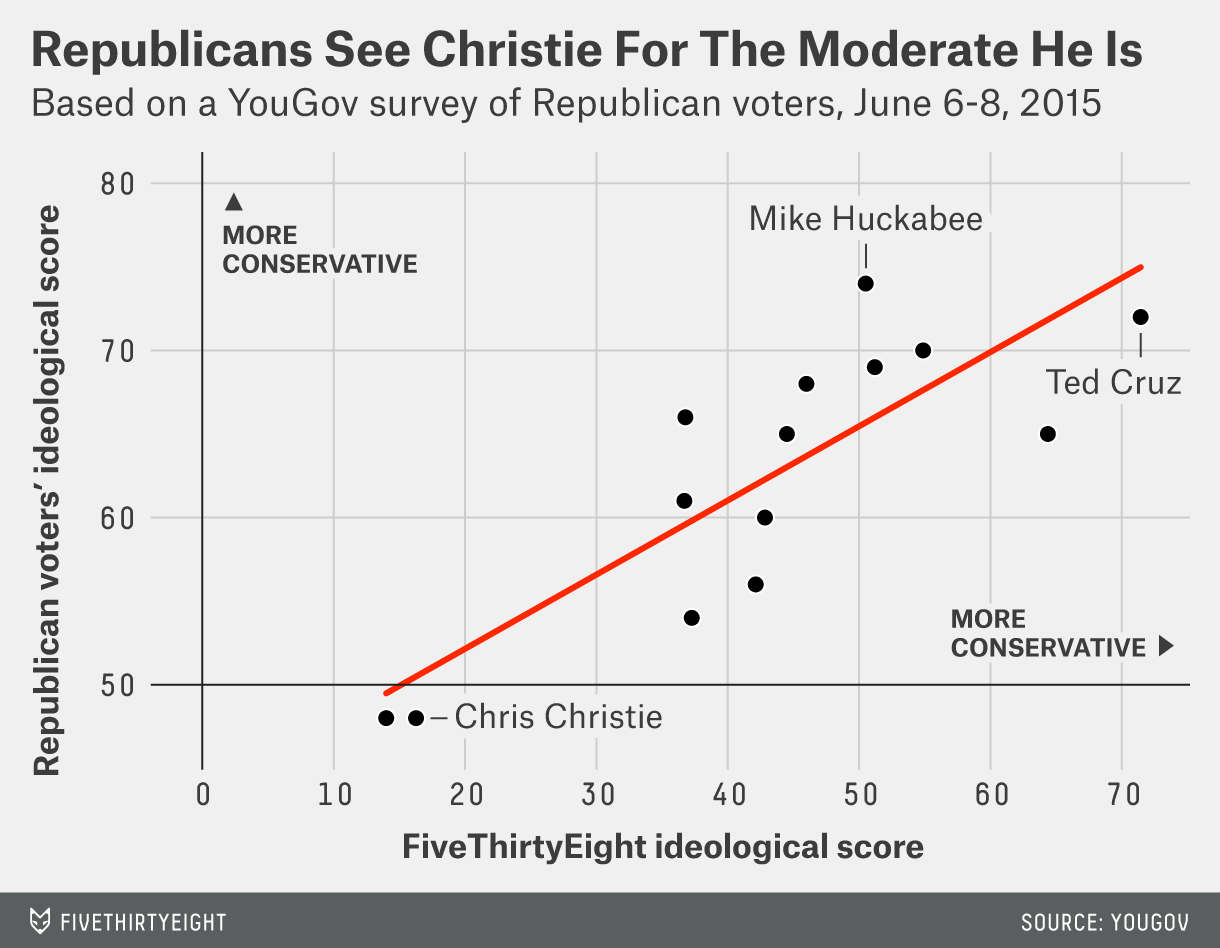 Problem 2: Christie hasn’t been seen as a team player since 2012.

Check out this table of Christie’s net favorability (favorable minus unfavorable) ratings from 2011 to the present. Within the party, Christie actually peaked not after Hurricane Sandy, but in the three surveys taken in 2012 before his Republican National Convention speech.

You might remember that speech as the one in which Christie did what a loud northeasterner (like yours truly) does: He spoke about himself. The speech was widely panned as self-aggrandizing when he was supposed to be promoting the party’s presidential nominee, Mitt Romney. For someone who hoped to rely on his rhetoric to overcome his record, it was the opposite of what he needed.

Then two months later, Christie decided it was necessary to hug President Obama. No one who can rise above politics for more than two seconds can fault Christie for being thankful that Obama was helping New Jersey in the aftermath of Hurricane Sandy. But many Republicans thought the hug was too much, helping portray Obama as a bipartisan executive just before the 2012 election.

The result was that Christie angered the two groups who matter in presidential primaries: the party actors and the voters. Christie’s net favorability rating among Republican voters, which dropped 16 percentage points between 2012 and 2013, is now far lower than any nominee in the modern era who was so well known. Even among his home-state Republicans, Christie’s only getting 18 percent support and is tied with Bush in the state’s Republican primary. At his peak, he was at 51 percent.

Christie still had a trick up his sleeve: He was seen as the most electable Republican in 2013. His net favorability ratings with Democrats and independents were what you might expect in some Aaron Sorkin screenplay about the perfect Republican (e.g., this guy).

Then the news broke that Christie’s staff ordered lane closures near the George Washington Bridge to create traffic jams in September 2013 in Fort Lee, New Jersey. The most-cited reason was political payback against the mayor of Fort Lee for not supporting Christie.

Although Christie denied involvement and was never charged, most Americans thought he knew what was going on. If he did, it seemed to add to his reputation as a loose cannon. Christie was increasingly portrayed in the press as a politician who did what he felt like without thinking of the consequences, exactly the type of person that parties tend not to nominate.

Right after Bridgegate, Christie’s net favorability among Democrats and independents went into a tailspin and hasn’t recovered, as you can see in the table above. Voters support candidates who are either electable or who line up with their ideology. In a perfect world, they’ll get both. In Christie’s world, they get neither.

Christie has trailed Hillary Clinton in every national poll in 2014 and 2015. Even though Jeb Bush isn’t doing much better, he has either tied or been ahead of Clinton in three surveys this year.

Christie’s net favorable rating among all groups is lower this year than last year. He has fallen from 7 percent in the national primary polls in January to just 3 percent now. Christie is even in danger of missing the first debate, on Fox News, for failing to meet the network’s eligibility requirements, which would be a deadly blow to his campaign. He needs a bounce off his announcement to be sure to make it.

Generally, I’m not a big believer in momentum in the polls, but Christie’s drop makes sense. As the other Republicans have become better known, voters see no reason to choose the flawed Christie. At the same time, he’s received more scrutiny as a result of considering a run for president. Just imagine how many more inspections of Christie’s record will begin now that he’s declared.