John Hinderaker at the popular conservative blog PowerLine reports that it’s been cold, cold, cold in his home town of Minneapolis, Minnesota, going to far as to compare it with “The Year Without a Summer”, 1816, when global temperatures were abnormally low as a result of the eruption of Mount Tambora:

I don’t think things are quite so bad this year, but if something doesn’t change pretty soon 2009 may go down in history, in some parts of the U.S. at least, as another year with barely any summer. Here in Minnesota and across the Midwest, temperatures are abnormally cold. I don’t know whether the phenomenon is world-wide–data that will answer this question have probably not been assembled, and may not be honestly reported–but the current low level of solar activity suggests that the cooling trend could indeed be universal. 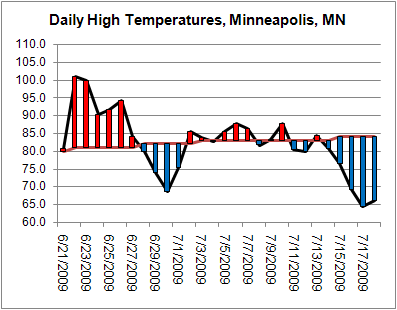 Selective memory is a powerful thing. I’m not particularly certain when pointing out the fact that it might be cool or rainy in your hometown one afternoon became subject for worthwhile blog material, but you have started to see this all the time on certain conservative blogs, probably led by the example of Matt Drudge.

You are eligible for this challenge if:

1. You live in the United States and provide me with your home address and telephone number (I will provide you with mine) and,
2. You are a regular (at least once weekly) contributor to a political, economics or science blog with an Alexa traffic global ranking of 50,000 or lower.

The reason for the latter requirement is because I want to be able to shame/humiliate you if you back out of the challenge or refuse to pay, as I’d assume you’d do the same with me.

The rules of the challenge are as follows:

1. For each day that the high temperature in your hometown is at least 1 degree Fahrenheit above average, as listed by Weather Underground, you owe me $25. For each day that it is at least 1 degree Fahrenheit below average, I owe you $25.
2. The challenge proceeds in monthly intervals, with the first month being August. At the end of each month, we’ll tally up the winning and losing days and the loser writes the winner a check for the balance.
3. The challenge automatically rolls over to the next month until/unless: (i) one party informs the other by the 20th of the previous month that he would like to discontinue the challenge (that is, if you want to discontinue the challenge for September, you’d have to tell me this by August 20th), or (ii) the losing party has failed to pay the winning party in a timely fashion, in which case the challenge may be canceled at the sole discretion of the winning party.

Any takers? You can reach me by clicking the ‘Contact’ button at the top of the page.

EDIT: No takers yet. Eligibility will remain open through Monday (the 20th). Limit three contestants within any one 100-mile geographic radius.

And sorry for all the typos, etc. Been a long week.