Amare the ant is back! This week, he’s trying to escape from a spider web.

After Amare has crawled a total of 4 inches, how far away from the center of the web should he expect to be on average?

Data from the Event Horizon Telescope was recently used to generate a never-before-seen image of the black hole — Sagittarius A* — at the center of our galaxy. One of the most striking things about the image is how clearly we can make out the black hole’s shadow (as shown below). That’s because the plane of its accretion disk is nearly perpendicular to the vector between us and the black hole.

Was this likely to occur, or was it just a cosmic coincidence? Let’s find out. Assuming the accretion disk was equally likely to be in any plane, what is the probability of it being within 10 degrees of perpendicular to us, thereby resulting in a spectacular image? 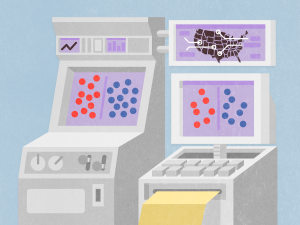 Watson stared at the list, but he couldn’t make out any sort of pattern.

But Holmes’s eyes lit up. “Why, it’s elementary, my dear Watson!”

What pattern did Holmes notice?

At first, you might have wondered if there was some sort of geographical connection among these 17 states. Next, you might have carefully inspected the letters, looking for some sort of alphabetical or linguistic pattern. For example, all 17 states include the letter A! Well, except that Missouri doesn’t have an A … and Alaska (among others) is missing from the list.

Looking back at the wording of the riddle, Holmes specifically said it was “elementary.” And that was the biggest clue of all — or, as Mike, this week’s winner told me, “You can just go straight to hell with that ‘elementary’ pun.”

Last week, you had four fair tetrahedral dice whose four sides were numbered 1 through 4.

If we let A, B, C and D represent the four rolls, there were five distinct states you could have found yourself in after each round: ABCD (all four rolls were unique), AABC (one duplicate), AAAB (one triplicate), AABB (two duplicates) and AAAA (all four rolls were the same). For each of these states, you could assign a probability of winning the game upon reaching that state. For example, p(ABCD) — the probability of winning when all four rolls were unique — was 1. Meanwhile, p(AABB) and p(AAAA) were both zero. At this point, you still had to solve for p(AABC), which we’ll call x, and p(AAAB), which we’ll call y.

At this point, you had two equations with two unknowns, x and y. After solving these simultaneous equations, you found that x was 29/60 and y was 9/20.

Should you ever find yourself playing this game in the real world, according to Tom’s results you should opt for an odd number of dice.