What’s going on with Anthony Davis? After an outstanding 2015, the fourth-year New Orleans big slumped last season, with major declines in his shooting percentage, block rate and all-around play. The Pelicans shut him down for the final 14 games of the season because of shoulder and knee injuries, and he missed a portion of this preseason with an ankle sprain. Thanks to these setbacks, Davis has been eclipsed by the NBA’s new hot young center, Karl-Anthony Towns. Last spring we wrote about what may have caused this decline, but what can be expected from Davis this season and beyond?

As a reminder, 2014-15 Davis was preposterously good. His Box Plus/Minus — a rate stat that attempts to calculate a player’s overall contributions on both offense and defense — was +7.1, meaning he was seven points better per 100 possessions than an average NBA player. He was just 21 years old. Few have made such a huge impact at such a young age.

In 2015-16 his BPM dropped to +2.2. That isn’t terrible, and it put him in the same range as other good but incomplete 2016 players such as Hassan Whiteside, Gordon Hayward and Giannis Antetokounmpo. But Davis came into the season with stage-whispered expectations that he’d contend for MVP — we listed him as the best franchise player in the NBA — so elbowing for room next to Whiteside and Hayward was a considerable step down.

Although few players have regressed this hard, Davis isn’t the first young, good NBA big to hit a couple of bumps along the road.1 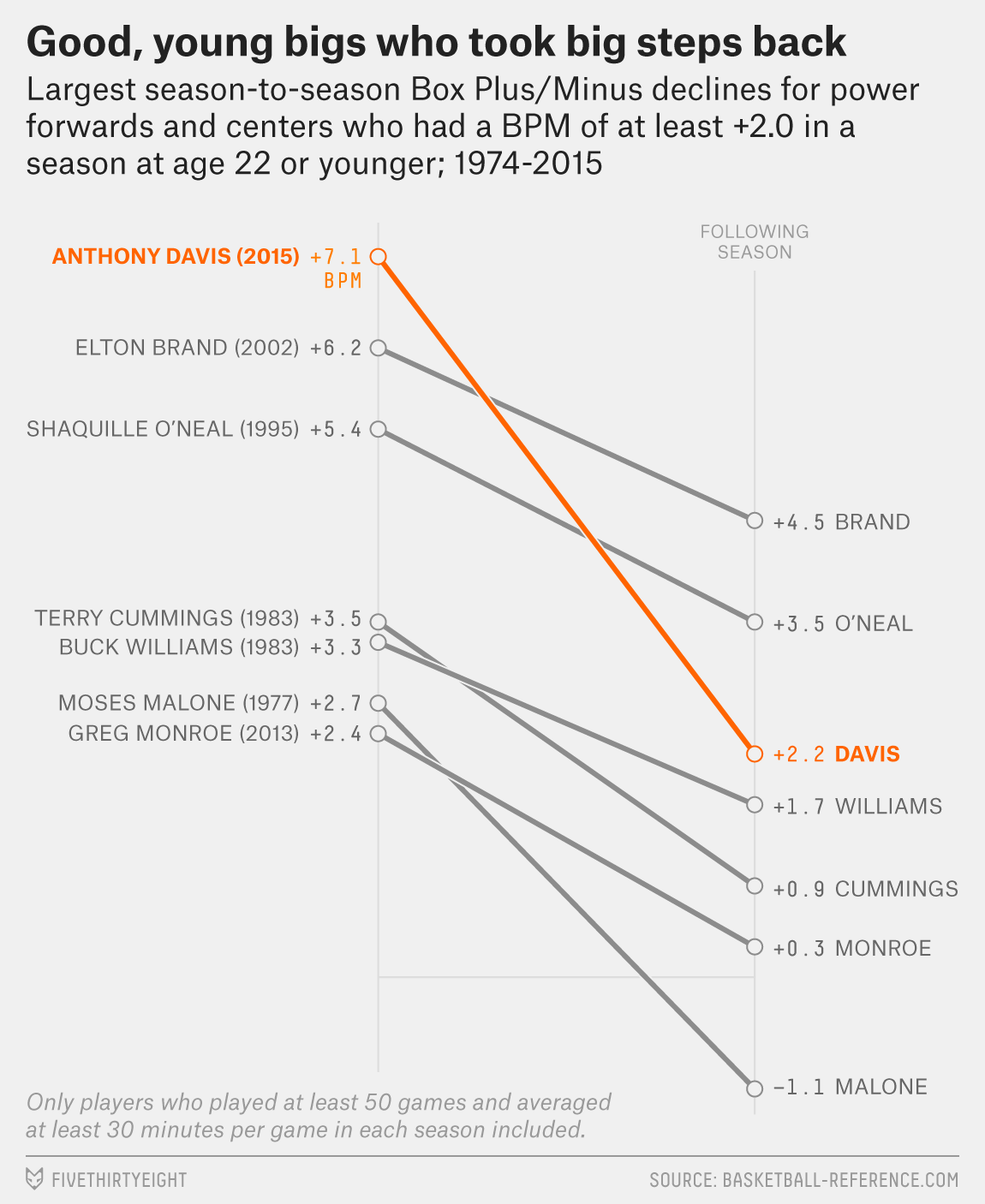 Some of these down years are easy to diagnose. Shaquille O’Neal, Moses Malone and Elton Brand, like Davis, struggled with injuries. Buck Williams, Greg Monroe and Terry Cummings were healthy but had more standard regressions. But these six comps should give a lot of hope to Davis fans: Fast-forwarding just one season, five of these players regained most if not all of the BPM they lost. And our CARMELO projections expect Davis to make a similar comeback. 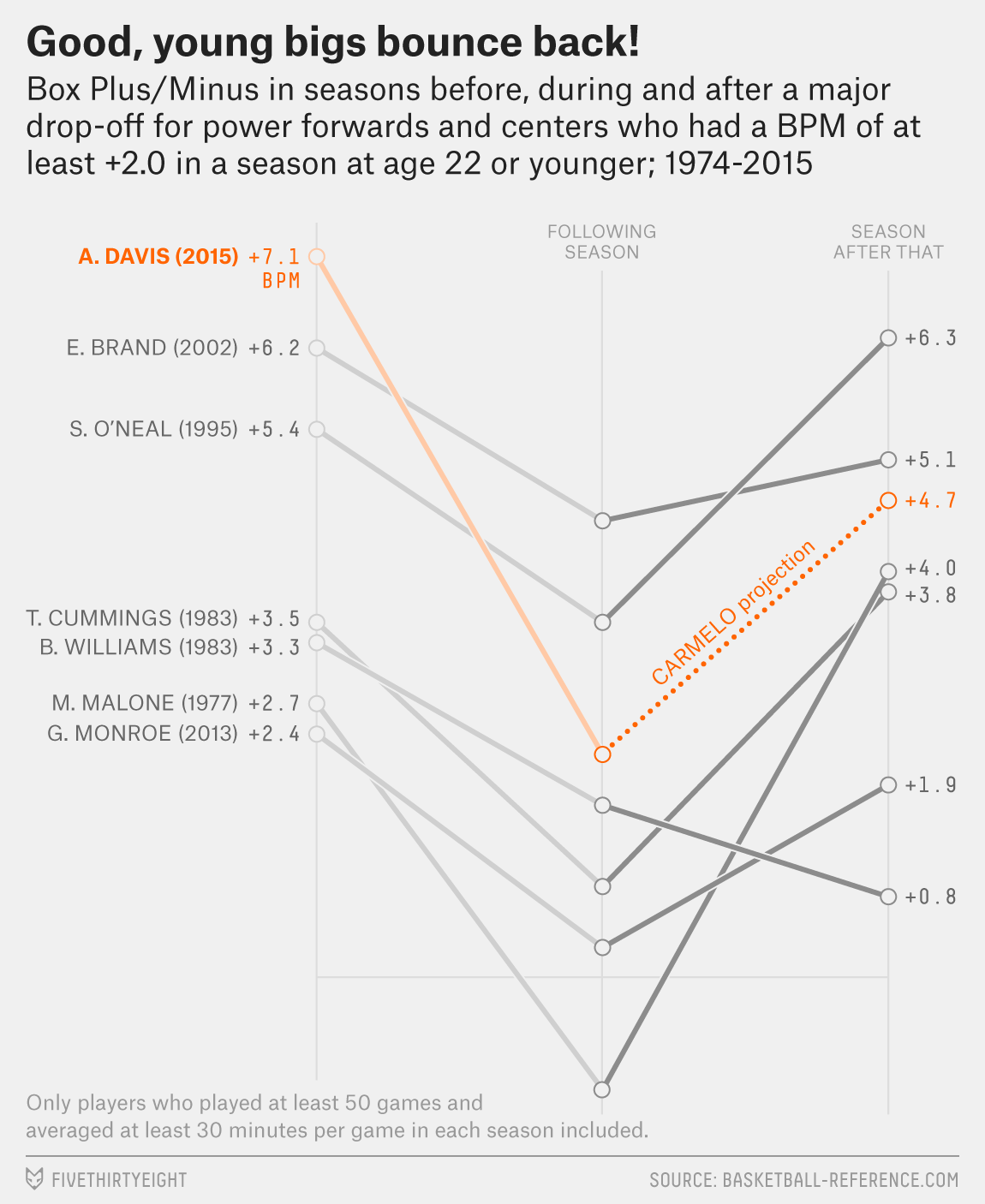 The career arcs of these players is better news still. Shaq and Malone ended up in the Hall of Fame. Williams, Cummings and Brand — who just retired today! — didn’t reach the same peaks, but each played for at least 17 seasons, each was selected to multiple All-Star games, and each of their names comes up frequently in discussions of the most underrated players in NBA history. If Davis follows a similar path he’ll be tremendously valuable, even if he never lives up to the superstar promise of 2015.

How will your favorite NBA team do this year? See all of our predictions for the 2016-17 season »

Unfortunately, there are reasons to doubt that the 23-year-old Davis can even make it through another decade in the NBA. All bigs are susceptible to injury, but most contend with just a couple of weak points. Davis has been injured everywhere:

It's the variety of injuries that's most amazing. pic.twitter.com/JMzZ2vlz1S

And there’s a second factor working against Davis: The other Pelicans are simply not good. The team went 6-15 last season when Davis did not play, and some of the best non-Davis players on the roster — Jrue Holiday, Tyreke Evans and Quincy Pondexter — will not be available at the start of the season.

It’s conventional wisdom in some NBA circles that talent is talent, and player development is independent of supporting cast. This is a central principle of the Hinkie system, in which the 76ers’ top draft picks play on rosters packed with nobodies. In counterpoint are players such as Kawhi Leonard, who’s become a superstar with the Spurs while playing alongside Tim Duncan, Tony Parker and Manu Ginobili and being coached by a staff that’s fostered success for more than a decade.

Many of Davis’s good, young comps fall into that second group. Shaq played alongside Penny Hardaway in Orlando before jumping to a Lakers squad that had Eddie Jones and a young Kobe Bryant. Cummings left a terrible San Diego Clippers team when he was 23 to join a Bucks squad that had made the playoffs the previous five seasons. Malone’s Rockets made it to the Eastern Conference Finals on his first year with the team at age 21, playing alongside All-Star forward Rudy Tomjanovich. Davis is signed with the Pelicans through his 28th birthday. If he needs better teammates to blossom into a Hall of Fame center, he’ll need those teammates to come to him.

CORRECTION (Oct. 20, 3:45 p.m.): An earlier version of this article misstated Anthony Davis’s status for the season opener. He is now expected to play in the game and is no longer questionable.

Check out our NBA predictions.