New bike lanes certainly make life better for cyclists, but how do they affect drivers? This question is hotly debated, especially when a new bike lane replaces a lane used by vehicular traffic. It seems that unless a ton of people start commuting by bicycle, giving away a lane would cause increased car traffic. But is this really the case?

We tried to answer this question by looking at Minneapolis, which Bicycling magazine has recognized for several years as the best city for biking in the U.S.1 (Yes, this is the same Minneapolis where the average high temperature in the winter is below freezing. These cyclists are dedicated.) True to this ranking, Minneapolis funded the construction of 45 miles of bike lanes in 2010 and 2011. To test a bike lane’s effect on congestion, we looked at the 10 road segments that gained a bike lane during this construction at the cost of a driving lane.

Minneapolis doesn’t report traffic data broken down by day and time. It’s difficult to find this data for any city. What Minneapolis does report is the Average Annual Daily Traffic (AADT), a measure of the number of cars and commercial vehicles traveling on a road in a typical day. A city may collect this information continuously throughout the year, or over a few days using portable sensors. If you’ve ever driven over a thin black pneumatic tube lying across a road, then congratulations — you’ve probably been counted in the AADT.

Minneapolis measures AADT on the same roads every few years, so we have data from before the bike lane installation (in 2008 or 2009, depending on the road) and after the installation (in 2012). We found that each road seemed to have about the same traffic volume after its bike lane was installed. Running a statistical test across all 10 roads confirmed that there was no difference in AADT before and after the installation of the bike lanes.2 Now, you may be saying, “Hold up! If you have the same number of cars traveling down a road with one fewer lane, won’t there be a lot more congestion?” A good point, and one that requires us to look beyond traffic volume.

To estimate congestion during rush hour, we can convert AADT to an estimate of the number of cars traveling in the busiest direction during peak travel time.3 Dividing this by each road’s capacity4 gives us what traffic engineers call the volume-to-capacity ratio, or V/C ratio. This metric tells us how “full” each road is. As the V/C ratio approaches 1, the amount of congestion increases. At V/C ratios between 0.5 and 0.75 you have mild to moderate congestion, where traffic is still moving smoothly but you might notice that it’s a bit harder to move from one lane to another.5 At V/C ratios between 0.75 and 0.9 you experience heavy congestion and the effect on your commute is greater. Here, traffic starts to slow down and minor incidents can cause jams. Severe congestion occurs at V/C ratios above 0.9, where the road is almost at capacity and there are no gaps to switch lanes. The V/C ratio for our 10 streets in Minneapolis can be seen in the following chart. 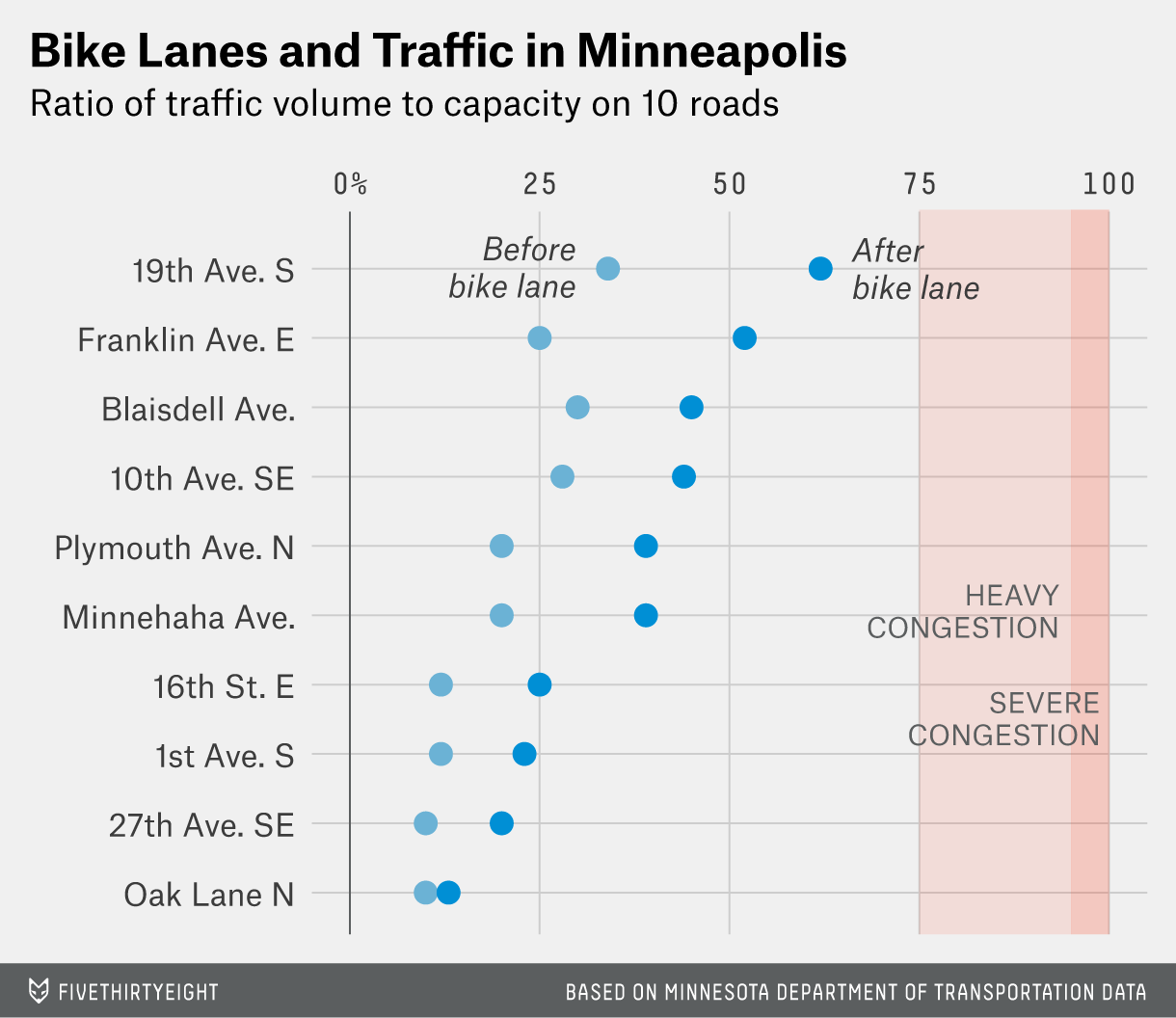 Now the effect of the bike lane becomes a lot clearer. Taking away a lane does significantly increase the estimated V/C ratio during rush hour.6 Some of them — like 19th Ave. S at 62 percent capacity — will have noticeably less space to maneuver between lanes. But it’s not at a high enough V/C ratio where traffic will get really congested and start slowing down.

This is an important point: Bike lanes don’t cause a lot more congestion if you put them on the right streets. If you cut down the size of streets that are already near capacity, you’ll create severe congestion. But if you start with roads that are well under capacity, you’ll only increase the congestion a little bit. And it may not even be noticeable. Slimming down these roads that are too “fat” is known as a road diet — and yes, that is the technical term.

The question of increased congestion caused by new bike lanes has come up frequently in New York City since June 2010, when the city’s Department of Transportation built a protected bike lane along a 1-mile road, Prospect Park West in Brooklyn. To accommodate this bike lane, the city removed one of the three travel lanes for vehicular traffic. Forty-eight percent of Brooklyn residents polled at the time thought it was a change for the better, but 32 percent disagreed. Some hated the bike lane so much that they sued the city, arguing that it made it unsafe for pedestrians to cross the street, took away parking and caused more congestion.7 All these concerns seem to make sense but warrant a close look at the data.

New York City collected a lot of detailed data before and after the bike lane installation on Prospect Park West, which makes sense considering the city was facing motivated opposition. We took a look at the city’s January 2011 report and extracted data on traffic volume. Unlike in Minneapolis, this data was collected on 15 specific days (nine before the bike lane was installed and six after it was installed). The city collected data at two different intersections of Prospect Park West (at Carroll St. and 11th St.) during weekday morning and afternoon rush hours and found that there were no changes in traffic volume. But what about the V/C ratios? They increased significantly for both intersections in the morning and the afternoon, which you can see in the chart below.8 Some of the intersections were just above the level of mild congestion (V/C ratio ≥ 0.5), but not enough to affect the commute a lot. Just like the 10 streets in Minneapolis, Prospect Park West was still well under capacity during rush hour. 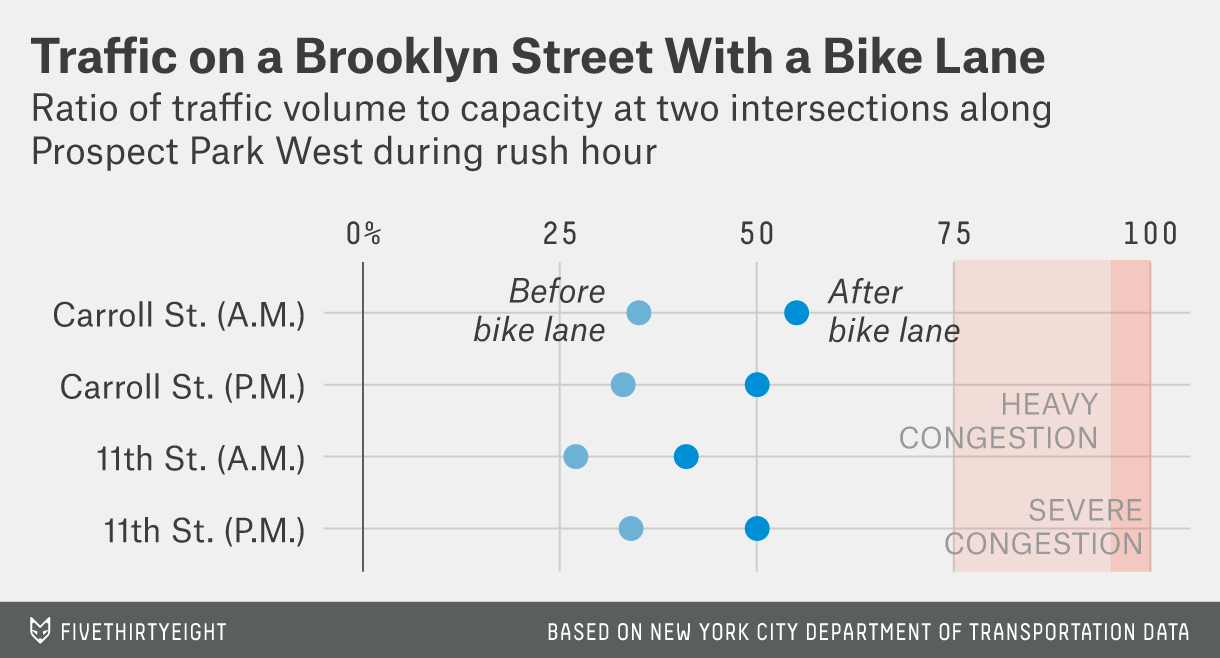 We can confirm our conclusions about the post-bike lane level of congestion on Prospect Park West with New York City’s Department of Transportation’s final metric. Somebody got in a car and actually drove 19 blocks down Prospect Park West, timing his or her trip during the morning and afternoon rush hours, and also during the middle of the day. The transportation department only attempted each trip once, so there’s not a lot of data for us to use in rigorous analyses. However, the city found that there was no evidence that the travel times of the trips before and after the bike lane installation were any different, and we agree.9

The city’s report contains a number of other interesting statistics about the effect of the Prospect Park West bike lane. The number of cyclists using the road went up, and speeding cars, cyclists riding on the sidewalk and injury-causing accidents went down. The road diet isn’t just creating a space for bikers; it’s also making the street safer for other types of users.

It’s true that Prospect Park West is just one street in a city-wide bike lane project. However, urban planners have found similar benefits of road diets and bike lane installations in other cities, such as Cambridge, Mass., Philadelphia, Seattle and St. Louis. Bike lanes, if they’re planned for the right streets, can be created without greatly increasing vehicular congestion. So, while opponents in Brooklyn may be right about fewer parking spots and a need to look both ways before crossing the bike lane, the data shows that this is only half the story.

Gretchen Johnson has a Master’s of Urban Planning from the University of Michigan and works as a transportation consultant in Boston. @railsandrockets

Aaron Johnson is a Ph.D. candidate in Aeronautics and Astronautics at MIT. @railsandrockets