If you read my colleague Harry Enten’s Sunday piece — or if you’ve been living in New York for the past few years — you’ll know that the city has recently endured some awful snowstorms. Of the top 10 snowfalls on record at Central Park dating to 1869, five have occurred since 2003. This week, they could be joined by a blizzard dubbed Winter Storm Juno.

So, has New York become snowier? I downloaded Central Park’s daily snowfall totals for the past 100 winters (1914-15 through 2013-14) from the National Climatic Data Center. I then broke the data down into five-year periods — for instance, the winters of 1989-90 through 1994-95 — and calculated how much snow there has been on average at Central Park each winter: 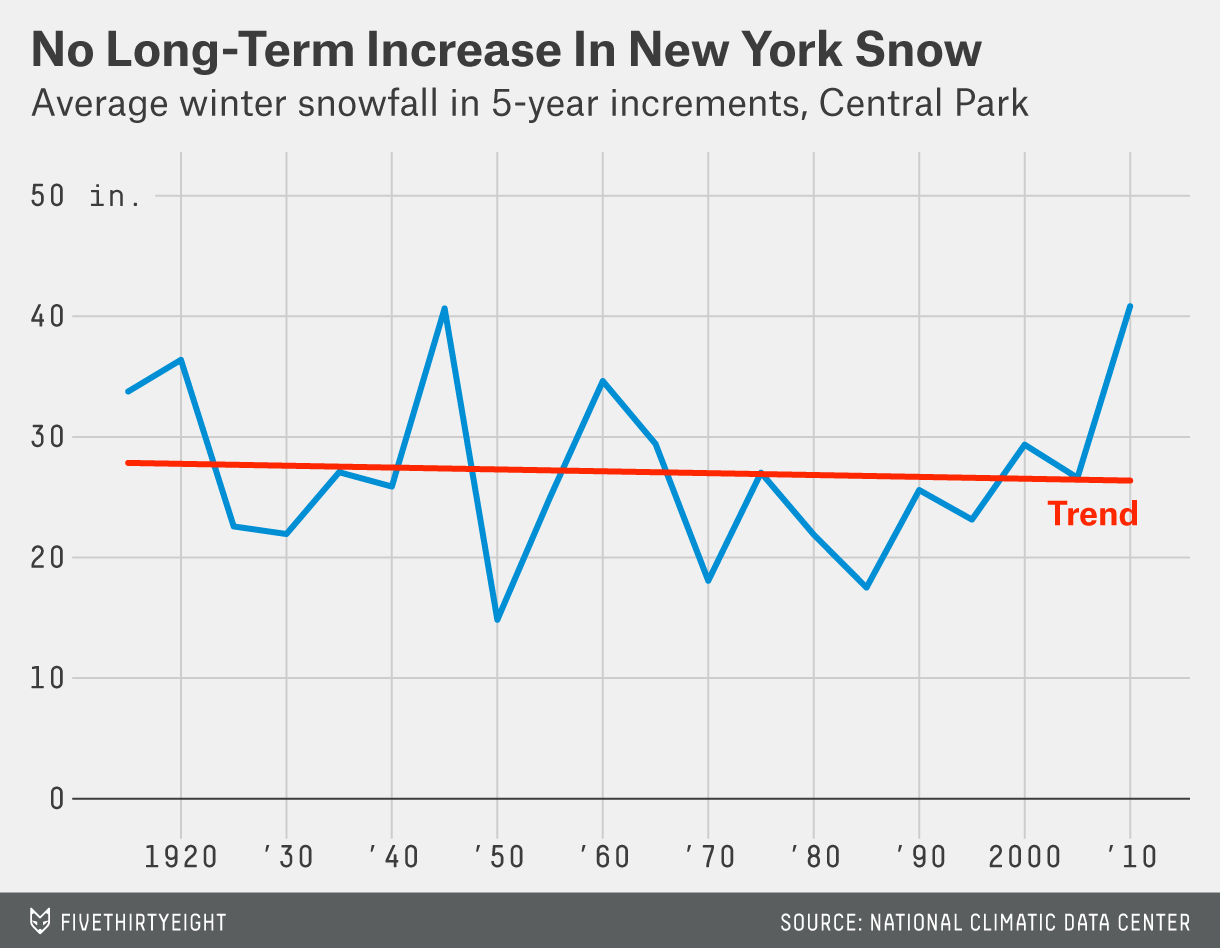 The past five winters in New York — 2009-10 through 2013-14 — have been among the snowiest of the century, with average snowfall totals of 41 inches per year. But winters in the 1990s and 2000s featured just average snowfall totals. Overall, the trend over the past 100 years is flat. Smooth out the year-to-year fluctuations, and Central Park is getting about as much snow as it always has.

But while the total amount of snow has been about the same as usual, it has been snowing less often in New York. From 1914-15 through 1938-39, Central Park recorded an average of 37 days per winter on which there was at least a trace of snow. For the past 25 winters, there have been an average of 28 snow days instead. Alternatively, we can look at the number of days with more than a trace of snowfall. (A trace of snow is defined as any amount less than 0.05 inches.) These have decreased, too — in fact, they’ve fallen pretty sharply. A linear trend line drawn from the data suggests New York is getting about 10 days per winter with more than a trace of snow, compared to 18 a century ago. 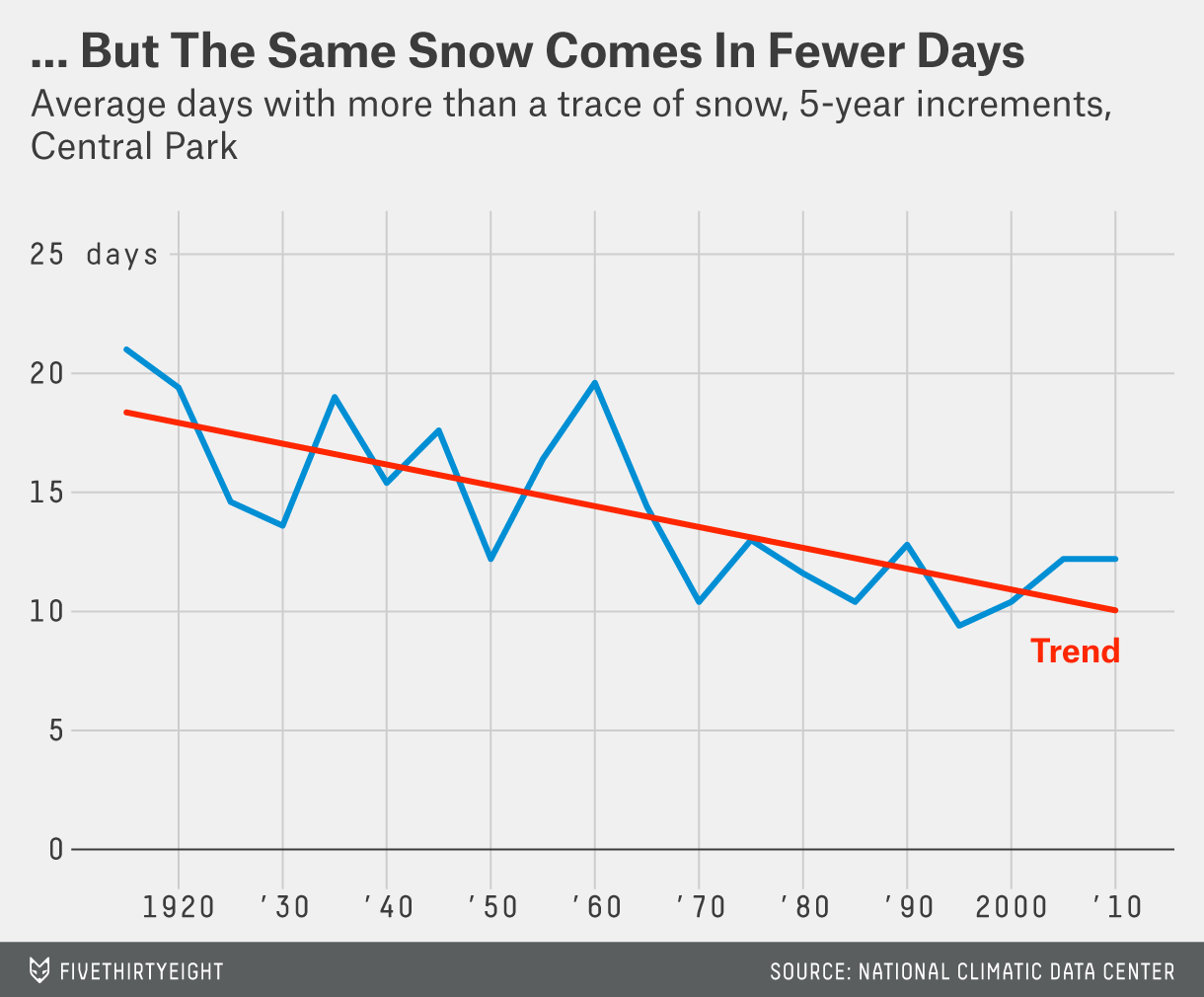 If the overall amount of snow has held steady while the number of snow days has decreased, that necessarily implies New York has been getting some heavy snowfalls to make up for the decreased frequency.

This isn’t a total surprise to climatologists. Severe winter weather has received less study by climatologists than other impacts of climate change. But an increasing amount of research has suggested we might expect to experience this pattern in certain climates, mostly because a warmer atmosphere can carry more moisture.

There’s some statistical evidence for this in the Central Park data. In the chart below, I’ve run a loess regression on the 100-year data set to estimate the average snowfall based on the high temperature at Central Park. There’s a peak that runs from about 20 to 32 degrees. It’s something of a myth that it can be “too cold to snow,” but very cold air tends to be much drier. 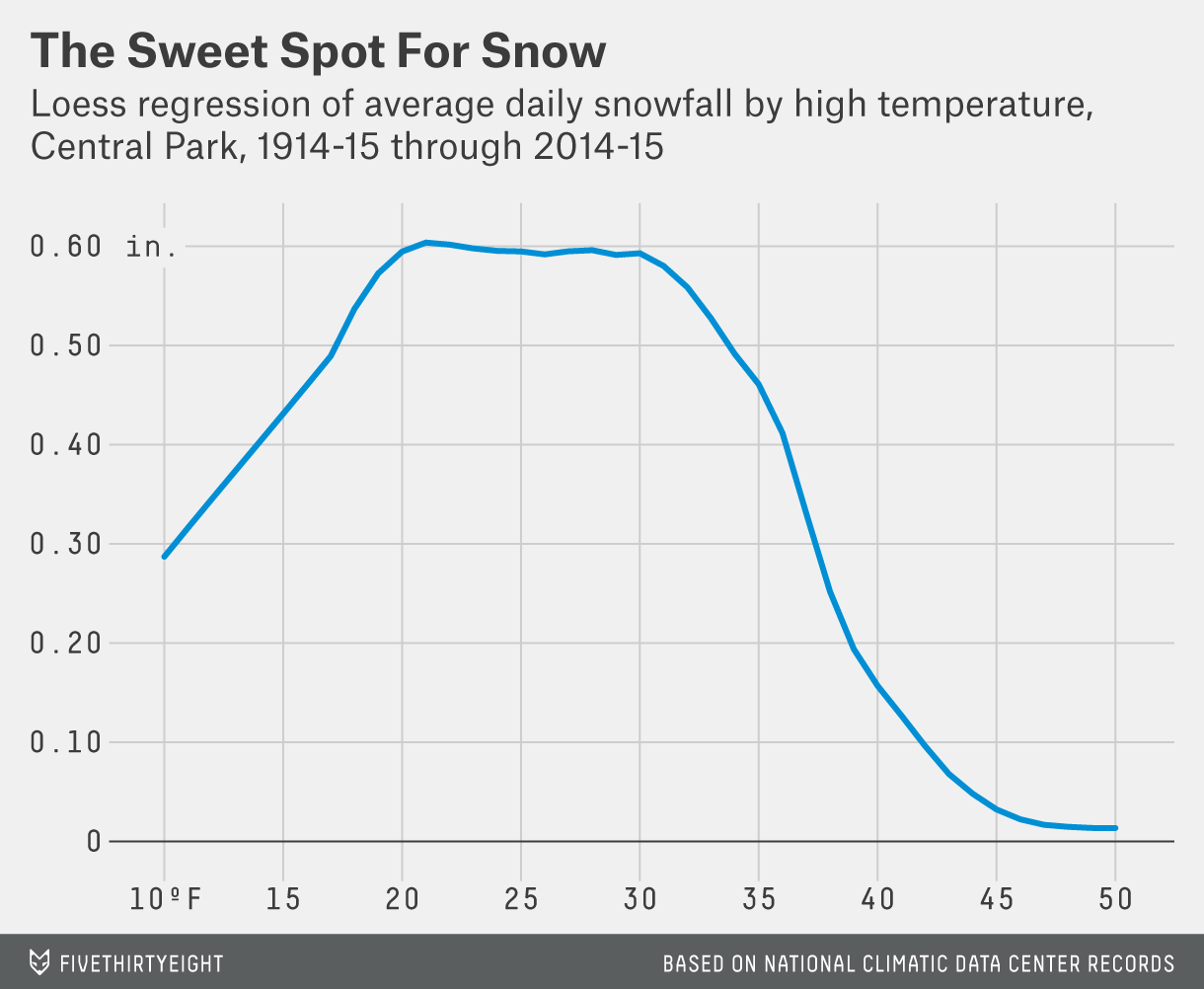 In fact, this chart understates the point. In the next graphic, I’ve charted the amount of liquid equivalent precipitation that fell on January days in Central Park based on the high temperature, without regard to whether it came as rain, snow or something else. At a high temperature of 50 degrees, there’s about six times as much precipitation as at 20 degrees. 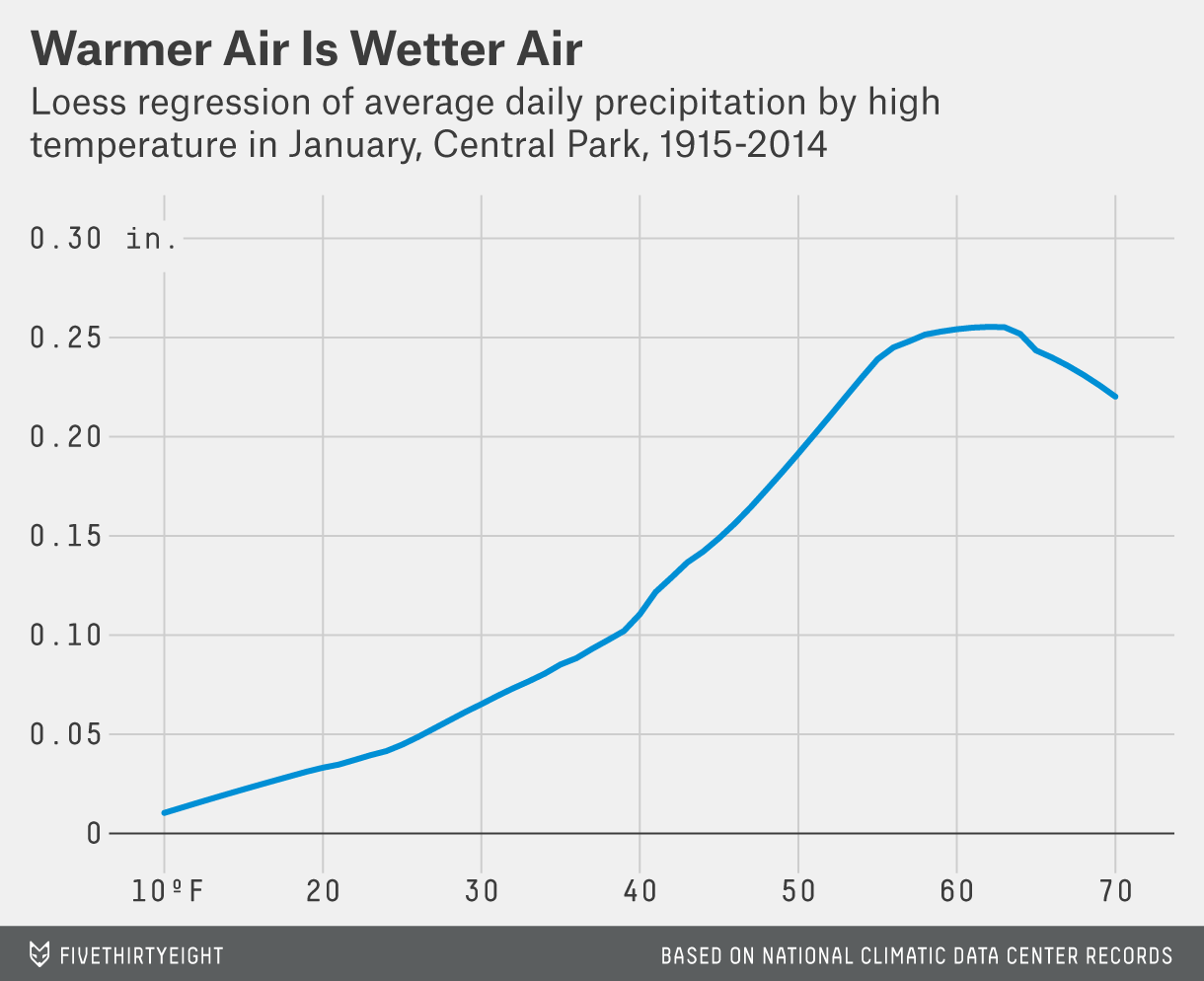 The point is that temperatures just below freezing can be something of a sweet spot for major snowstorms. There’s considerably more moisture than when the temperature’s colder, but it will still be cool enough for it to fall as snow instead of rain.1

Still, climatological data is volatile. What’s the probability that the heavy snowfall totals in New York recently have occurred by chance alone?

Based on this experiment, in other words, the fact that New York has had so many record-setting snowfalls recently probably isn’t just a coincidence or a fluke.

We can calculate this by means of a binomial test. From 1914-15 through 1998-99 there was about a 0.2 percent chance a given day in New York would feature at least 6 inches of snow.2 If the baseline rate is 0.2 percent, what’s the probability you’d wind up with at least 19 such days in the past 15 years on account of chance alone? It’s about 4 percent, according to the binomial test. So, this evidence isn’t quite as impressive as the answer we got by looking at record-setting snowfalls, but it points in the same general direction.

It’s harder to know whether the pattern will continue. Anthropogenic global warming, as I’ve said, is a plausible cause. But there’s a relatively narrow range of climates, according to research by MIT’s Paul O’Gorman, in which you’d expect a higher number of severe snowfalls but steady or declining snowfall overall. Eventually if it gets warm enough, we’d wind up in the winter-storm sweet spot less often.