After Democrats’ great midterm election, the 2020 election could be a second consecutive Democratic wave. According to FiveThirtyEight’s forecasts, Joe Biden has an 84 in 100 chance of winning the presidential election, Democrats have a 68 in 100 chance of flipping the Senate and the party has a 94 in 100 chance of keeping the House.1 Altogether, there’s a 65 in 100 chance that Democrats will have full control of the federal government next year.

Democrats’ hopes — and Republicans’ fears — for another blue wave grew this week with the release of several polls that were among Biden’s best of the entire year. It’s hard to tell exactly why this is happening given all the news of the past couple weeks, but no matter how you slice it, it’s not good for President Trump. For instance, a national poll from CNN/SSRS gave Biden an eye-popping 16-point lead among likely voters. Monmouth University also gave Biden an 11-point lead in Pennsylvania in a high-turnout scenario and an 8-point lead in a low-turnout scenario. Quinnipiac University backed that up with its own Pennsylvania poll showing Biden up by 13 points, and added a Biden+11 Florida poll and a Biden+5 Iowa poll for good measure.

At the same time, some other high-quality pollsters produced more subdued results in a few key swing states, although they hardly qualify as good news for Trump. Siena College/New York Times Upshot put Biden at 45 percent and Trump at 44 percent in Ohio and gave Biden a 6-point edge in Nevada. And Marquette Law School, polling its home state of Wisconsin, returned a result of Biden 47 percent, Trump 42 percent. Those results in Ohio and Wisconsin are especially significant given Trump probably needs to win them in order to secure a second term.

What to make of all these polls? Throw them in an average, of course. And FiveThirtyEight’s polling averages do suggest that Biden is widening his lead, although the degree varies depending on which state you look at. (Nationally, though, Biden has gone from a 7.3-point polling edge two weeks ago to a 9.4-point lead today.)

The topline takeaway from this is that, spurred by the Quinnipiac polls, Biden’s lead has increased the most (from 1.6 points to 4.6 points) in Florida, which was previously one of the few bright spots on the map for Trump.

Biden has also further cemented his lead in Pennsylvania (where it went from 4.6 points to 6.9 points) and in swingy but oft-forgotten New Hampshire (thanks to several polls over the last couple weeks that have consistently given Biden an 8- to 12-point lead there).

However, several states haven’t seen the same kind of shift, including Michigan and Wisconsin, whose demographics are similar to Pennsylvania’s yet whose polling has not seemed to improve for Biden. However, the fact that Michigan and Wisconsin polling has stayed still while Pennsylvania’s has zagged toward Biden has brought its polling average more in line with those two states’ — right around Biden+7 or Biden+8. So the recent movement in Pennsylvania may just be correcting an anomaly from August and September when Pennsylvania polls were oddly weak for Biden.

In tandem with his polling bump, Biden’s odds of winning are up, too. Here is a graph of our national forecast over time:

And here’s how the race has changed in Pennsylvania, the likeliest tipping-point state in the Electoral College: 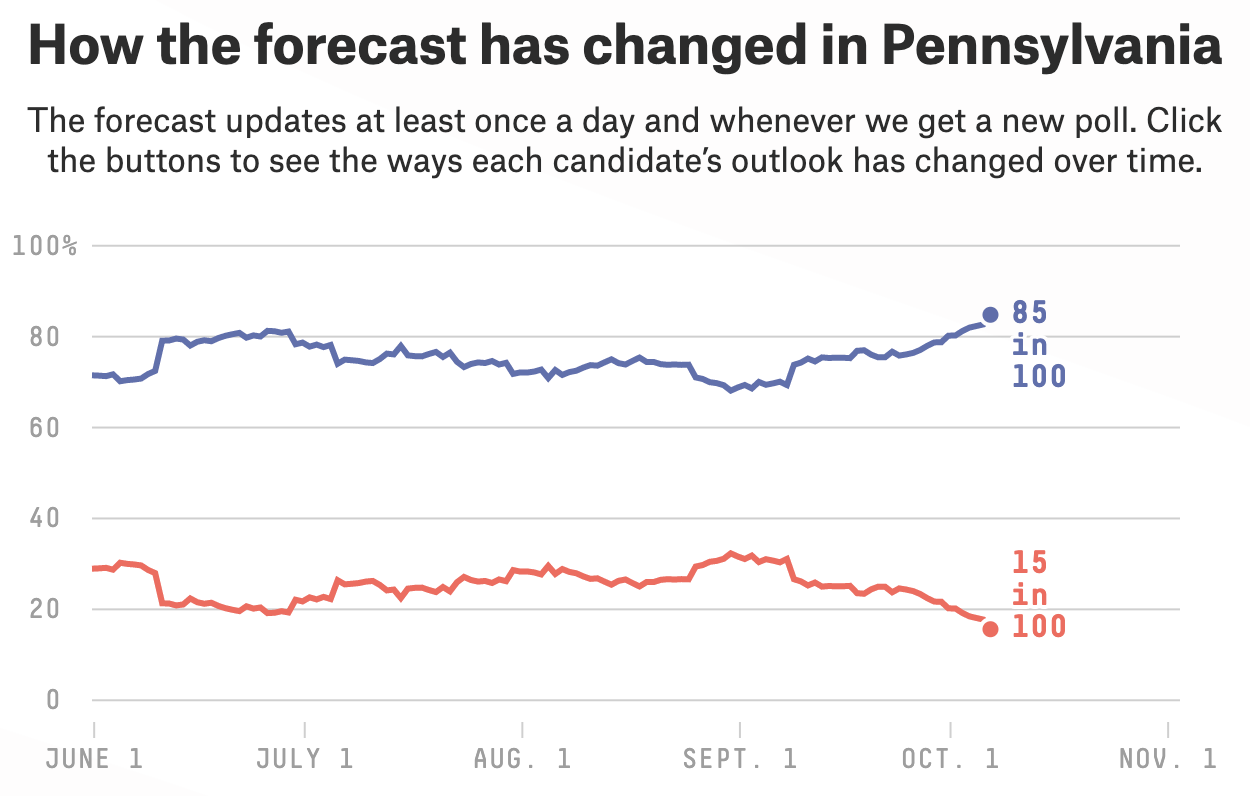 Before you overreact to these trends, though, remember that momentum doesn’t exist in general elections. This could be the beginning of Biden running away with the election … or it could be a temporary, post-debate sugar high for Biden. To take a high-profile, recent example, Hillary Clinton had an average 6.9-point national polling lead and an 88 in 100 chance to win the election on Oct. 17, 2016 — at the height of the anti-Trump backlash after the Access Hollywood tape — but fell back down to 3.9 points and a 71 in 100 chance by Election Day. Historically, trends are just as likely to revert to the mean as they are to continue.

That said, “reverting to the mean” this year might mean returning to the 7-point or so national lead that Biden held throughout September — and if he maintains that kind of lead on Election Day, he’ll be an overwhelming favorite to win the election, even with Trump’s Electoral College advantage.

In addition, because the pandemic has increased the popularity of mail voting, people are voting earlier than ever this year — at least 5.6 million votes have already been cast nationwide. So that throws yet another wrench into the equation: Even if there’s a sudden tightening in the last week or two before the election, it may not matter as much as it did in 2016 — a large chunk of votes will already have been banked at a time when Biden was flying high.