Saturday night seemed like a perfect one for a baseball game: 70 degrees and breezy, with the workweek, because of the Memorial Day holiday, still more than 60 hours away. The National League’s best team and the Mets’ longtime rivals, the Phillies, were in town at Citi Field.

I expected quite a few New Yorkers to have made the same calculation, and was resigned to having to pay a slight premium to buy tickets at StubHub. But just a few hours before gametime, there were still plenty of good seats available at Mets.com in virtually every section of the ballpark.

Two tickets and $132 later (I saved money with a cheap but quite wonderful Chinese meal in Flushing later on), I arrived at Citi Field, where the most conspicuous things were the number of Chase Utley jerseys (perhaps a quarter of the park was rooting for the Phillies) and the rows of empty seats across from me in left field. Eventually, the Mets announced an attendance of 29,337 — about 70 percent of capacity — for a game that their bullpen blew in the 8th inning. 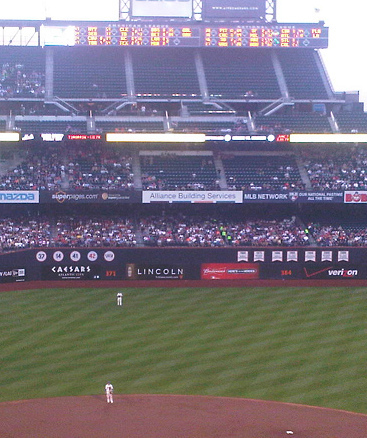 It wasn’t an entirely pathetic turnout, and I was reminded of the things I like about Citi Field — the relatively friendly ushers, the good beer selection, the easy access to the 7 train, the cross-talk between Mets and Phillies fans (which remained mostly good-natured).

Still, that the Mets couldn’t sell out the park or come close to it seemed troubling on a number of levels. Overall, the Mets drew an average of 31,337 fans for their three games against the Phillies, before drawing just 24,490 for Monday night’s game against the Pirates. By comparison:

The Mets’ attendance, through their first 25 home dates (not counting the second game of a double-header against the Rockies, for which separate admission was not charged), is now running 13 percent behind last season’s pace, which in turn ran 15 percent below 2009’s. But the news is a little bit worse than that still, for two reasons. 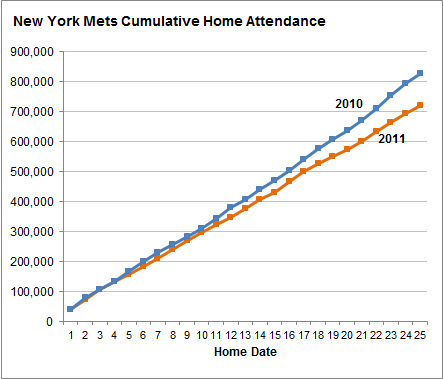 First, the downward trend appears to be accelerating. Through their first 10 home dates, the Mets were averaging 29,281 fans, just barely behind last season’s pace. Since then, however — despite playing most of their home games against the Phillies, Dodgers and Giants, who are usually good draws in New York — attendance has averaged just 28,024, versus 34,425 for the comparable period in 2010.

Second, this is happening despite lower ticket prices. According to data from Team Marketing Report, the average seat at Citi Field (combining what the Mets define as ‘regular’ and ‘premium’ seats) sells for $61 this season, down from $70 last year and $79 in 2009. This implies that the Mets’ ticket revenues are running about 25 percent below last season’s pace, and are barely half what they were just two years ago.

Obviously, the quality of the team on the field is not great. But neither were the Mets world-beaters in 2009 and 2010, when they won 70 and 79 games, respectively. They still play in a nice new ballpark and they still play in New York, baseball’s most populous and most desirable market.

Rather than bore you with the details of a regression analysis that I conducted, which looks at these different factors, I’ll just give you the conclusion: it suggests that the Mets are making something like 20 or 25 percent less than they “should” be making based on the size and wealth of the New York market, the quality of the team’s play over the near- and medium-term, and the way that fans rate the stadium experience at Citi Field.

This isn’t definitive proof of anything — the margin of error on the calculation is fairly high, depending on which assumptions one makes. But it does provide further evidence that there are unexplained or “intangible” factors driving down the Mets’ attendance and revenues this season, above and beyond the team’s mediocre play.

These intangibles can be divided into two broad categories: what Bud Selig once referred to as “hope” and “faith”.

Faith meaning that fans have confidence in management and ownership: that they’re making reasonable best efforts to put a winning team on the field. New Yorkers’ standards for this can sometimes be unreasonably high. But in this case, Mets fans have legitimate reason to gripe because of owner Fred Wilpon’s mounting legal and financial problems. In 2009, Mets’ fans confidence in their team’s ownership was above-average, ranking 9th of the 30 major league franchises in an ESPN survey. But the ranking plummeted to 22nd last season, and may fall further when ESPN releases new data later this year.

Hope meaning that the fans think the product on the field has a reasonable chance of improving, even if it isn’t terrific now. But this category too is problematic. Despite having an outside chance to make the post-season — the year is still pretty young and the Mets may soon get Johan Santana back — the team is instead talking about dealing David Wright or Jose Reyes amid reports that payroll may need to be slashed. And Mr. Wilpon has taken to ripping the team in the press.

Moreover, the rebuilding process could be a lengthy one. The Mets’ farm system ranks just 24th of the 30 major league clubs, according to Baseball Prospectus’ Kevin Goldstein.

The middling attendance for the Phillies series may be the canary in the coal mine: the sign that as bad as the Mets’ problems have been, they could still get much worse.