The comments made by Cliven Bundy and Donald Sterling this month demonstrate that the U.S. is far from a colorblind society. And the reaction to their comments has drawn further attention to the fraught relationship between racism and partisan politics. When racist statements by high-profile figures are made public, some news commentators become preoccupied with trying to discern the speaker’s political affiliation.

We were curious about the long-term trends in racial attitudes as expressed by Americans in polls. Are Republicans more likely to give arguably racist responses in surveys than Democrats? Have the patterns changed since President Obama took office in 2009?

Like The New York Times’ Amanda Cox, we looked at a variety of questions on racial attitudes in the General Social Survey, which has been conducted periodically since 1972. The difference is that we looked at the numbers for white Democrats and white Republicans specifically, based on the way Americans identified themselves in the survey.1 Our focus was only on racial attitudes as expressed by white Americans toward black Americans (of course, racism can also exist between and among other racial groups).

Two warnings about this data. First, survey responses are an imperfect means of evaluating racism. Social desirability bias may discourage Americans from expressing their true feelings. Furthermore, the sample of Democrats and Republicans in the survey is not constant from year to year. If the partisan gap in racial attitudes toward blacks has widened slightly in the past few years, it may be because white racists have become more likely to identify themselves as Republican, and not because those Americans who already identified themselves as Republican have become any more racist. 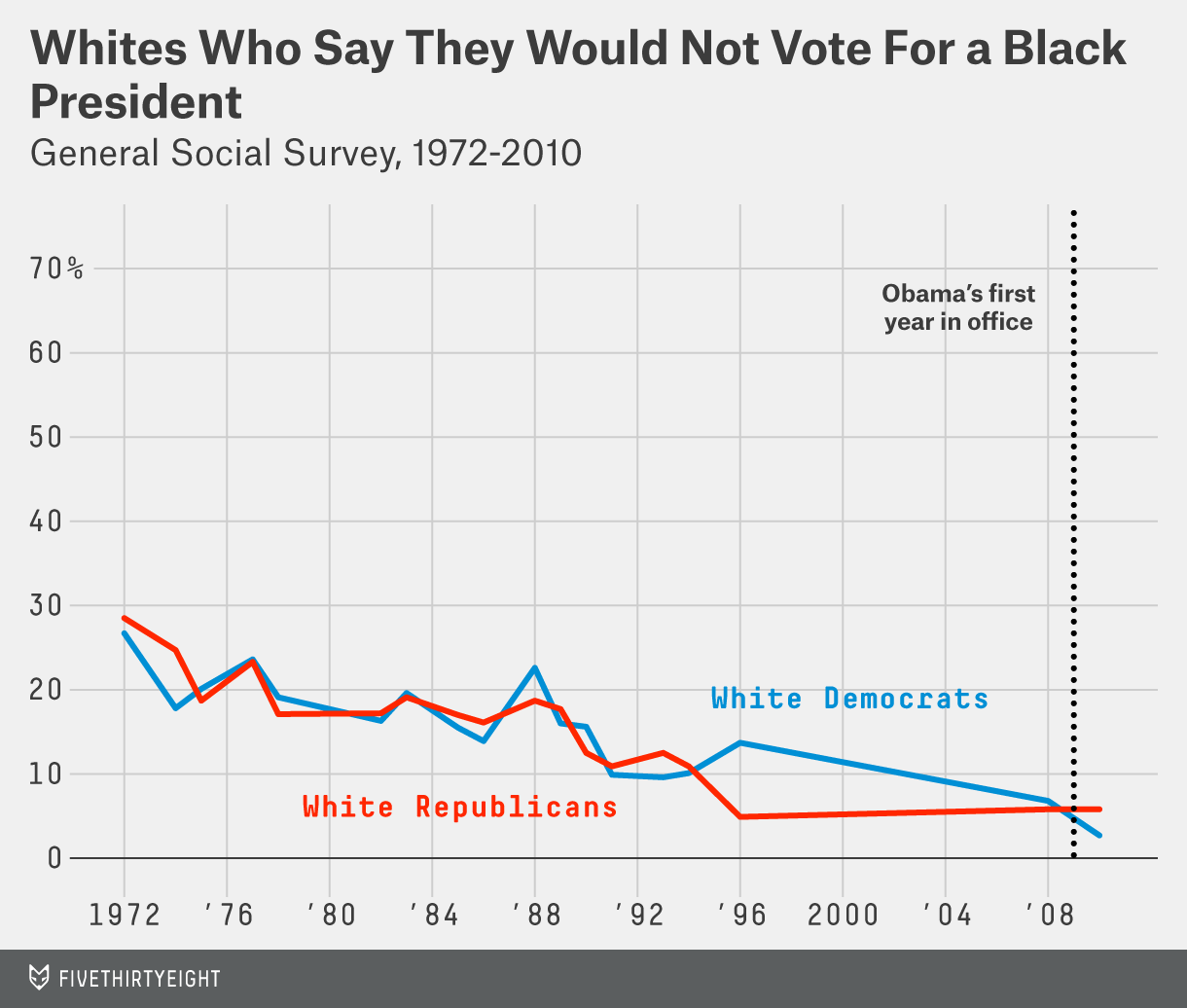 We can also look at whites’ willingness to express negative feelings about blacks. From 1990 to 2008, white Republicans were just slightly more likely than white Democrats to say they considered blacks to be more “unintelligent” than “intelligent.” However, the numbers have fallen over time, and the small partisan gap erased itself in the past two surveys, 2010 and 2012, under Obama’s presidency. 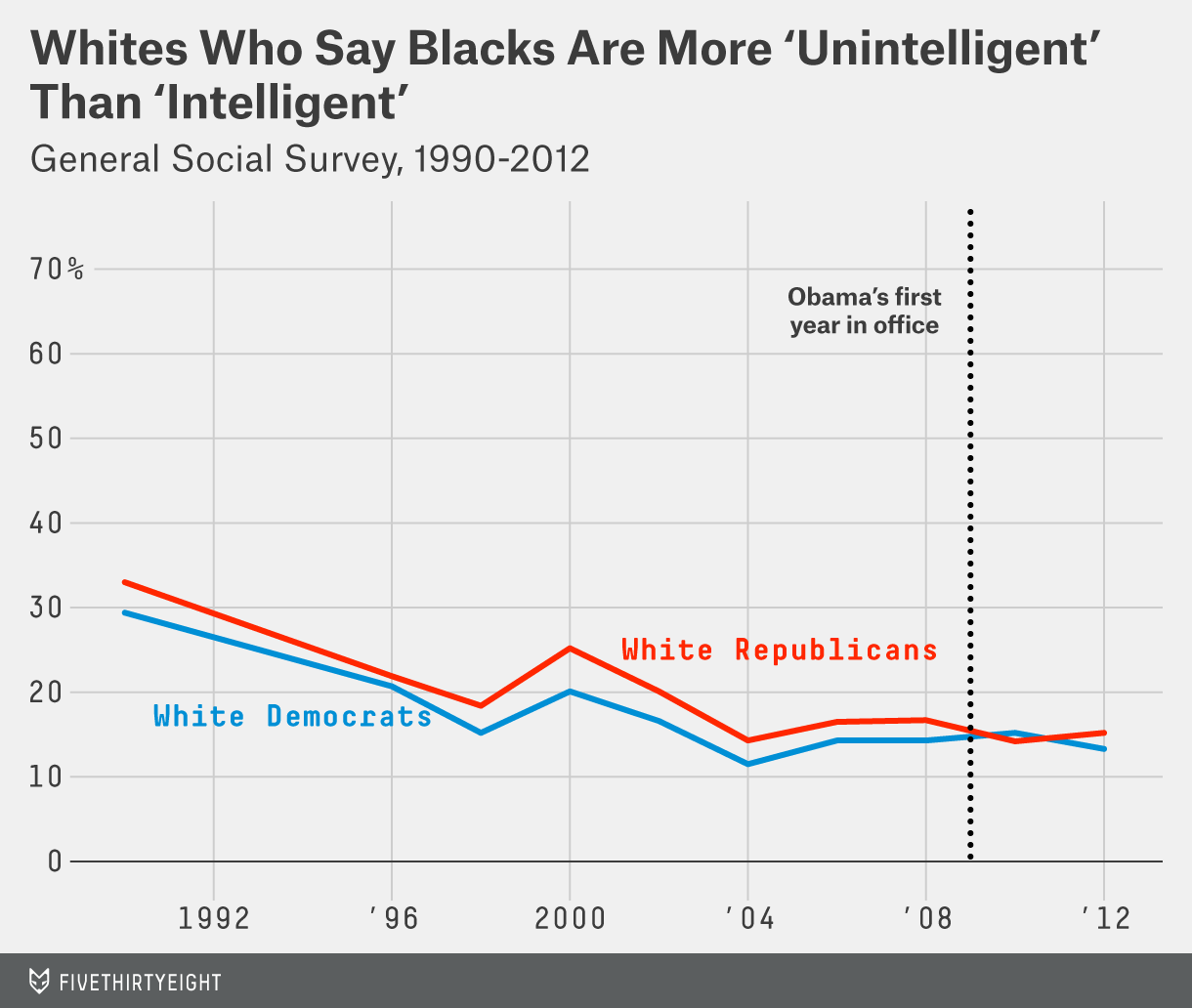 Another question asked respondents whether they regard blacks as more “lazy” or “hard-working.” White Republicans are slightly more likely than white Democrats to characterize blacks as “lazy,” and the numbers haven’t changed much over time. 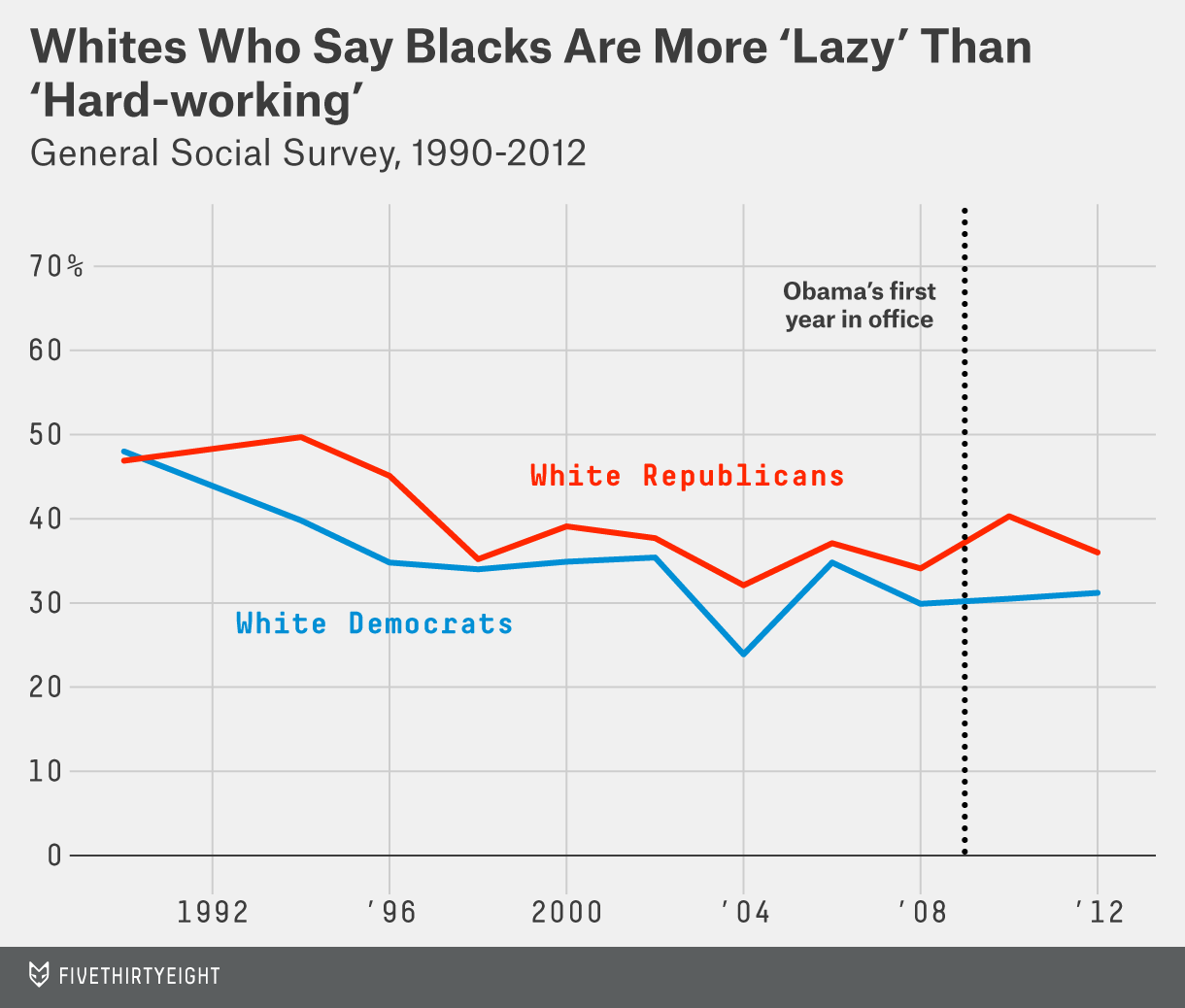 A related question asked respondents whether they think blacks lack the motivation to pull themselves out of poverty. The numbers on this one are high: In the 2012 survey, 57 percent of white Republicans and 41 percent of white Democrats agreed with the statement. This is also one question where the partisan gap has increased since Obama took office. 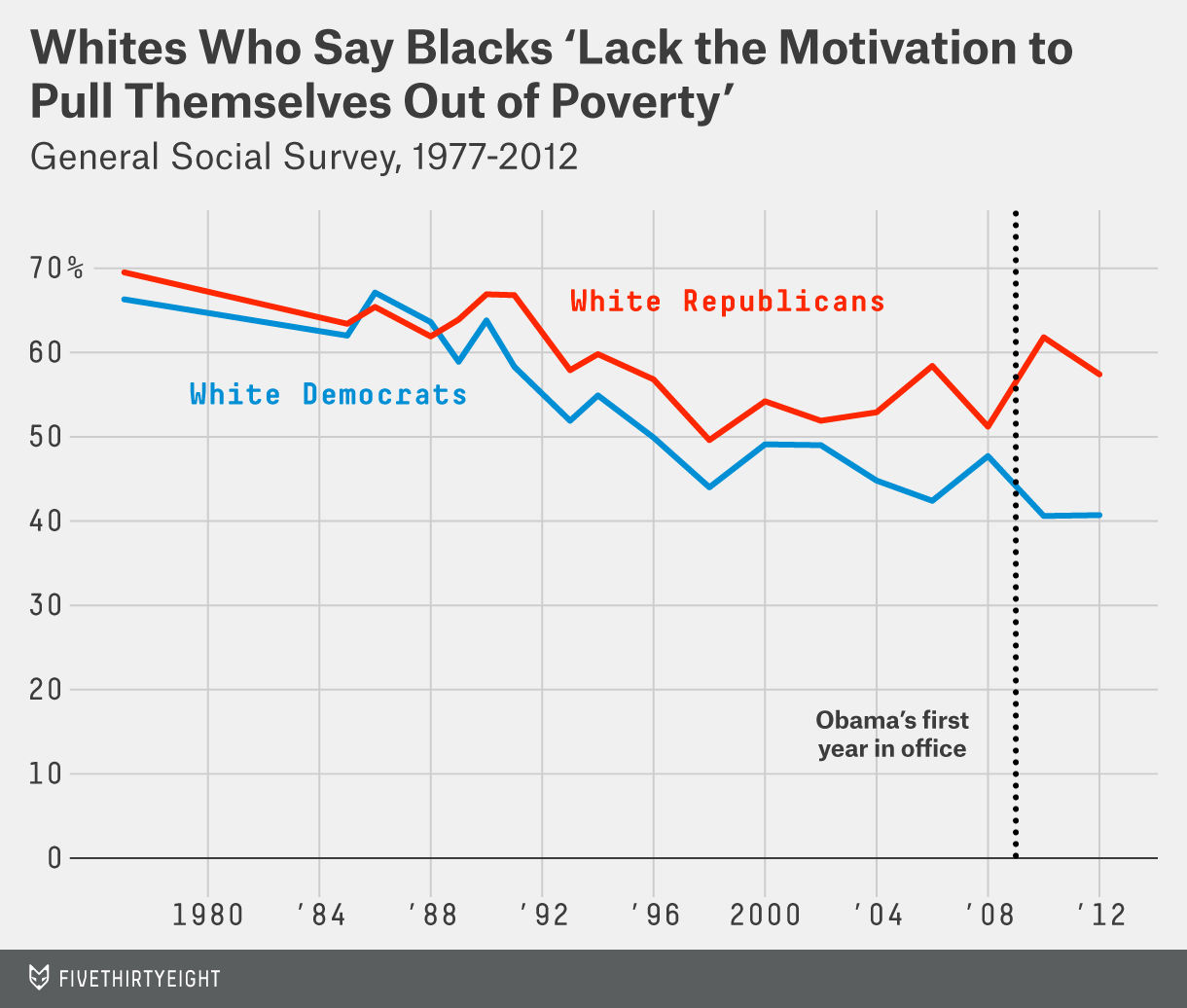 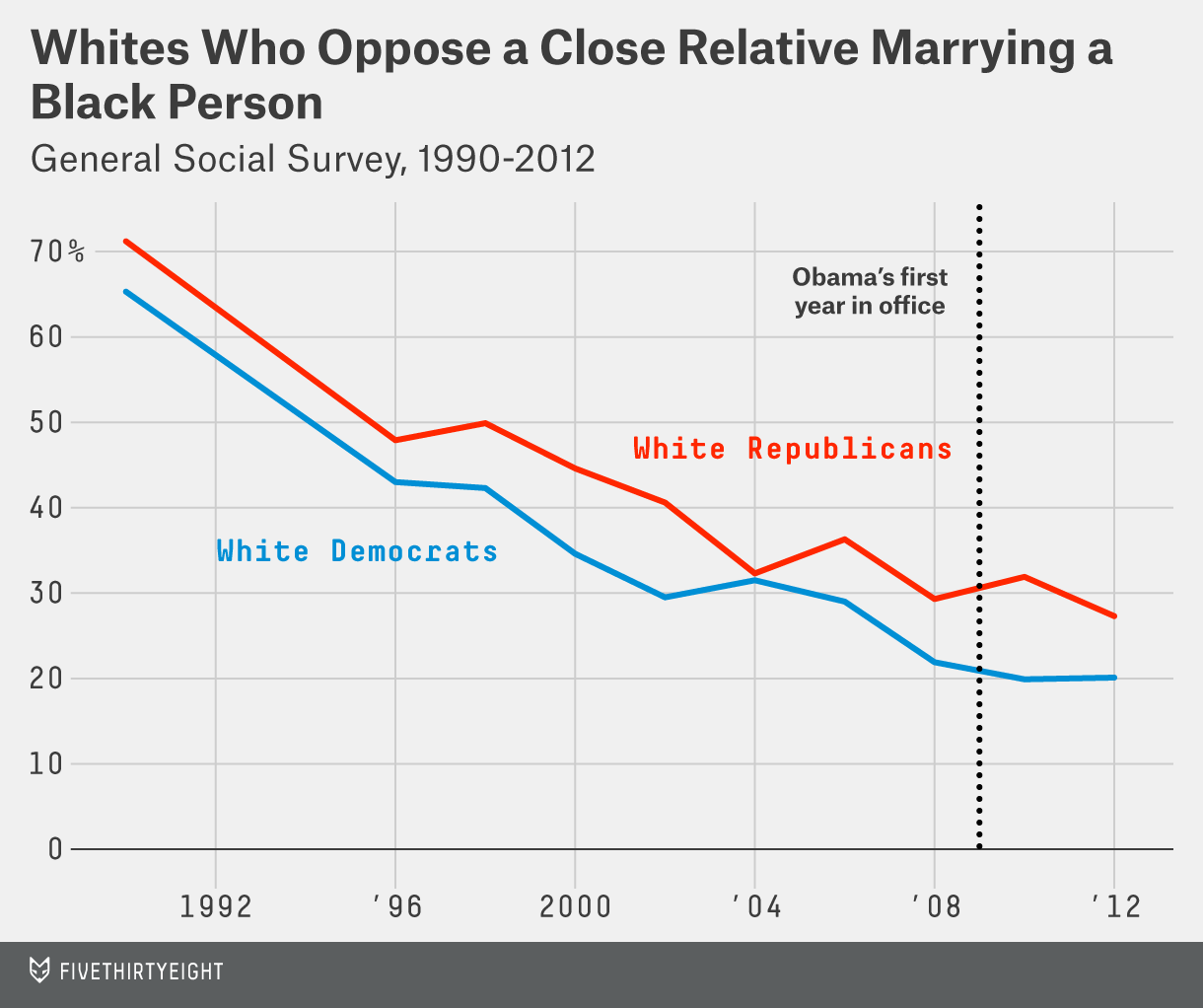 Another question asked respondents whether they’d object to living in a half-black neighborhood. As with the marriage question, the number of white Americans saying they would object has fallen quite a bit since the 1990s. There generally hasn’t been much of a partisan gap on this question. 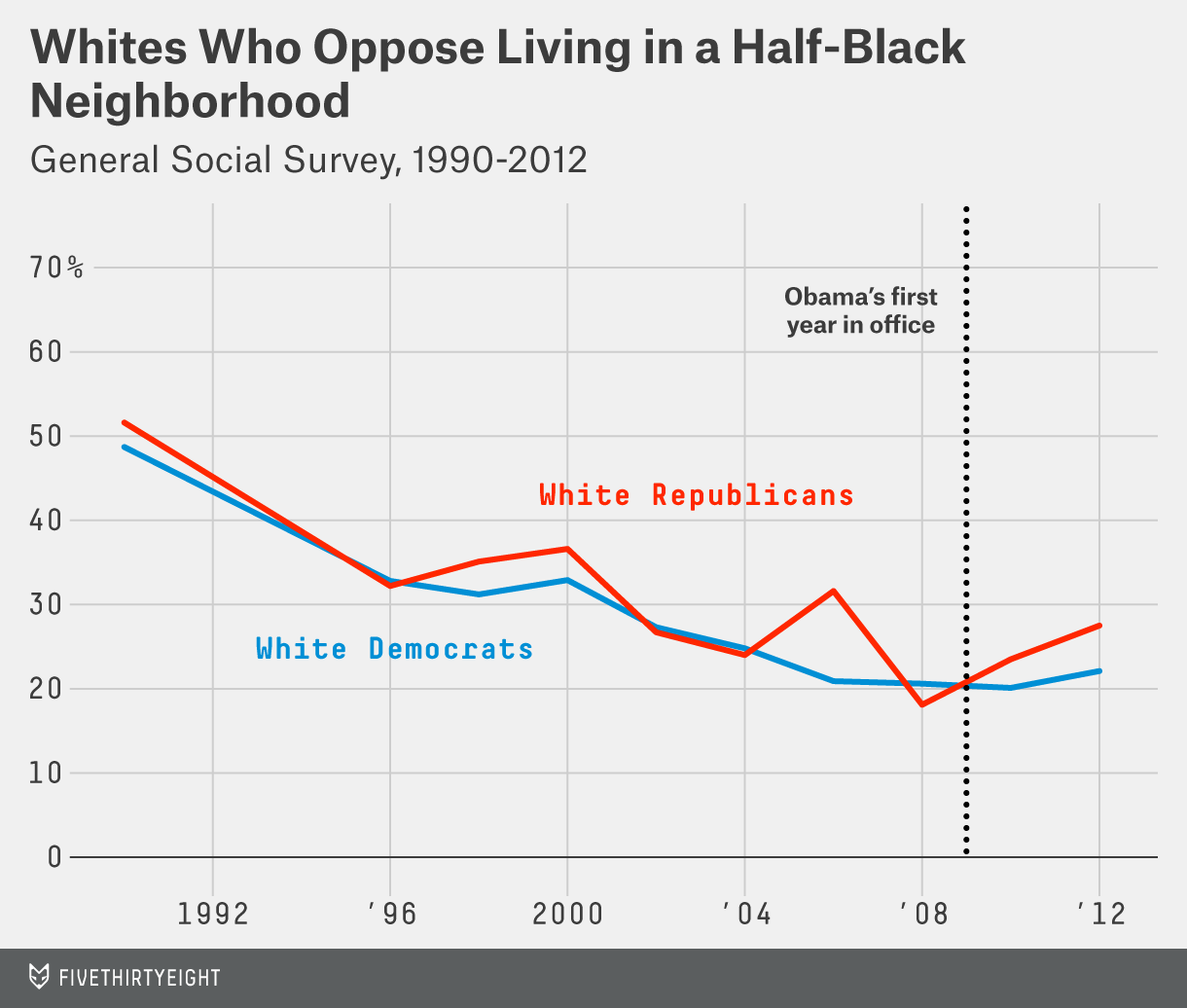 Since 1996, the survey has also asked respondents whether they feel “close” to blacks. Closeness is obviously a subjective quality, and failing to feel close to those in another racial group doesn’t necessarily imply racism. However, a survey question like this one may also be able to pick up on implicit racial attitudes that respondents would feel less comfortable asserting in questions about things like interracial marriage.

This question, in contrast to many of the others, has shown little change over time. It has also shown little partisan gap, although the number of white Republicans saying they don’t feel close to blacks has increased some since Obama took office. 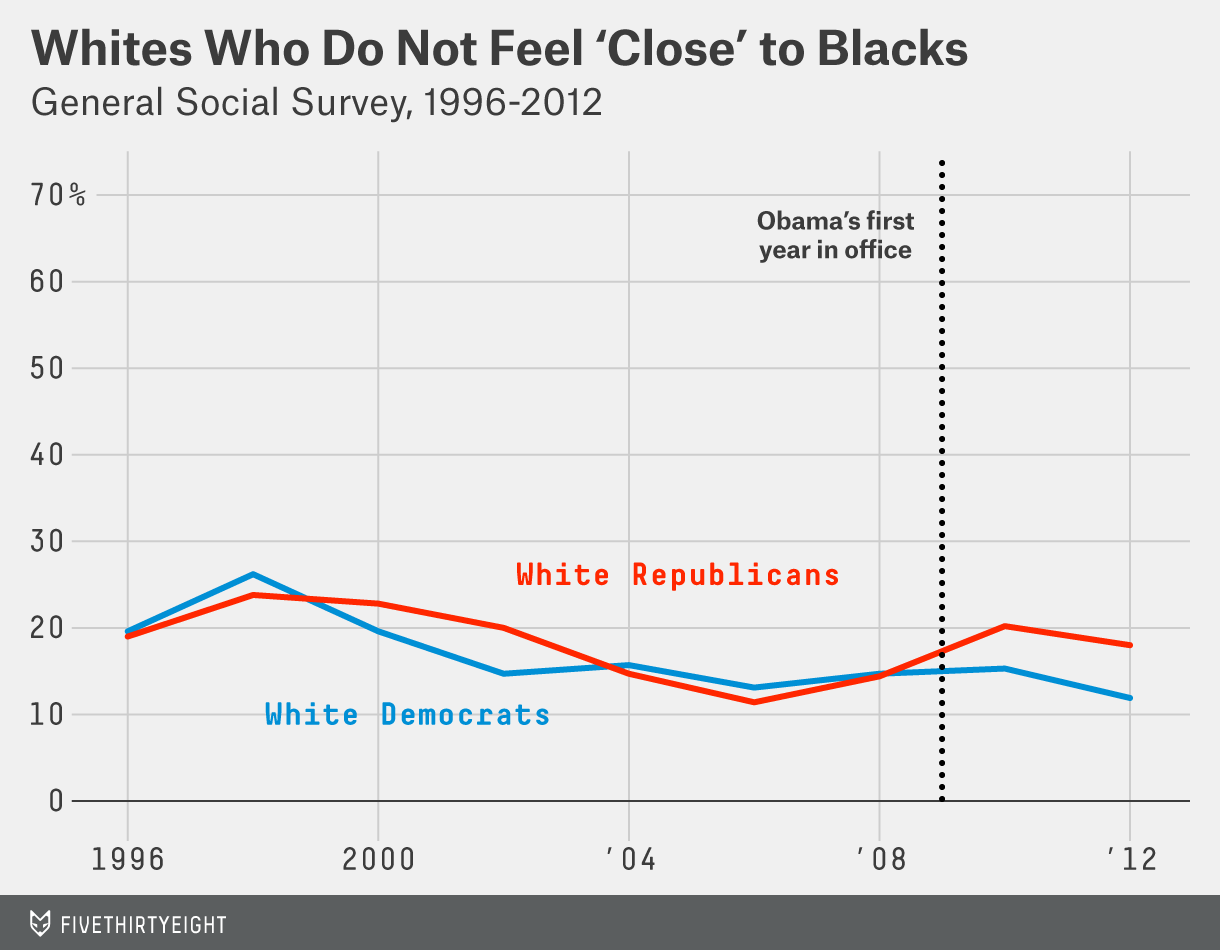 A final question asked Americans whether they think society spends too much money trying to improve the conditions of blacks. This is the most overtly political of the questions that we’ll study. It also shows the largest partisan gap of any of the questions, and one that has increased since Obama took office. 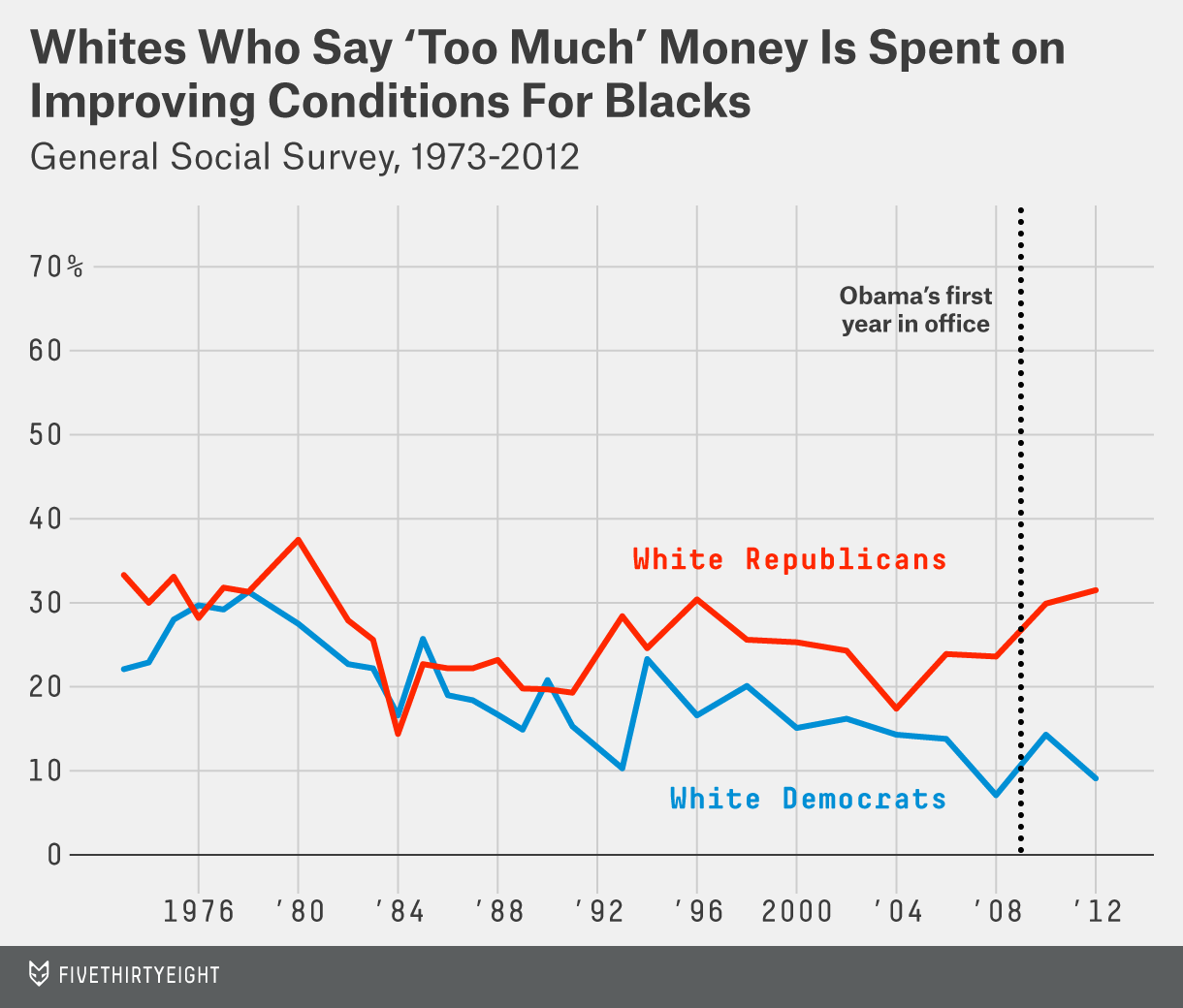 Obviously, measuring racism is challenging — through surveys or by other means. If you take the question about voting for a black president as the best indicator of racism, then only about 5 percent of white Americans admit to racism toward blacks. If you regard the question about whether blacks lack motivation as indicative of racial antipathy, then about half of them do.

We combined the responses from the eight questions into one index of negative racial attitudes. We accomplished this by averaging the number of white Americans who provided the arguably racist response to each survey item, extrapolating the value for years in which the General Social Survey didn’t ask a particular question based on the long-term trend in responses to it. 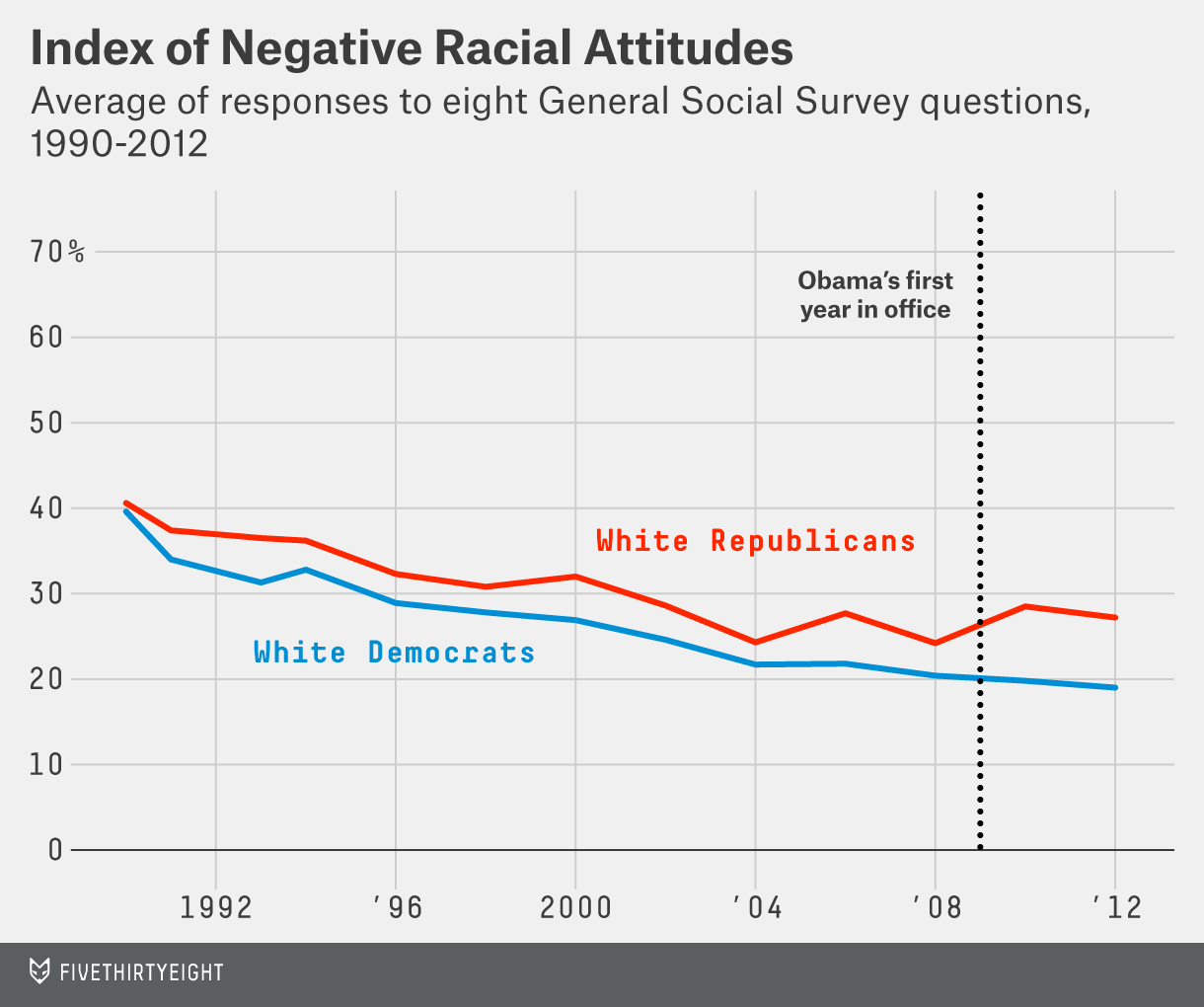 As of 2012, this index stood at 27 percent for white Republicans and 19 percent for white Democrats. So there’s a partisan gap, although not as large of one as some political commentators might assert. There are white racists in both parties. By most questions, they represent a minority of white voters in both parties. They probably represent a slightly larger minority of white Republicans than white Democrats.

Fortunately, the expression of racism by whites toward blacks has decreased over time, and for Americans in both parties — at least, according to this survey. In 1990, the index of negative racial attitudes stood at 40 percent for white Democrats and 41 percent for white Republicans.

There hasn’t been much of an overall increase or decrease in the index since Obama took office. On average, between the 2004 and 2006 editions of the surveys — the last two before Obama was either a president or a candidate — the index of negative racial attitudes stood at 22 percent for white Democrats and 26 percent for white Republicans. Those values are within the margin of error for those in the 2010 and 2012 surveys.

If there’s a discouraging trend, it’s not so much that negative racial attitudes toward blacks have increased in these polls, but that they’ve failed to decrease under Obama, as they did so clearly for most of the past three decades.