In a move that seems a bit heavy-handed even by the standards of a 1980s anti-drug PSA, Archie of Archie Comics will die Wednesday after taking a bullet for his best friend, who is a also a senator, gay and a staunch proponent of gun control.

The character — who has had a decades-long run in comics — probably won’t stay dead. Comics are notorious for the kind of existential comebacks that once only messianic religious figures, epic poem protagonists, and power ballad performers could pull off.

Indeed, media coverage of Archie’s impending demise has been consistent in describing it as a stunt designed to boost sales. And as we can see by looking at data from John Jackson Miller’s definitive comic book sales database, Comichron, and at data from Diamond Comics Distributors, virtually the only retail (brick-and-mortar) comic distributor, Archie could use a boost. Diamond Comic Distributors publishes data about aggregate market share (for the United States and Canada) for each publisher but doesn’t release numbers for individual lines. Here’s the market share of Archie Comics over the past 10 years, according to Diamond: 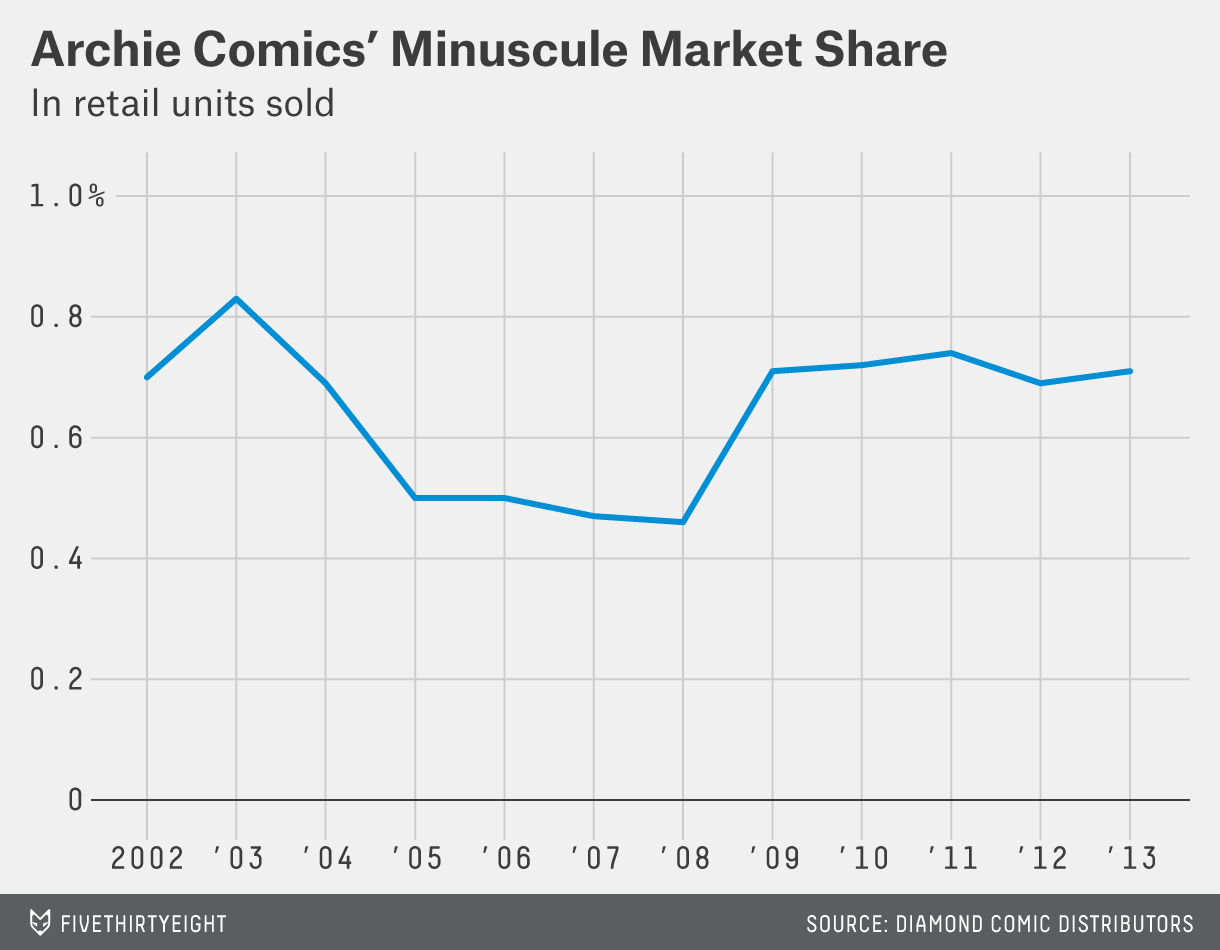 Hovering under one percent of the market — and this includes non-“Archie” publications by the publishing house, including the “Sonic the Hedgehog” series — “Archie” isn’t a huge player in the comic book sales space.

Compare the line’s current performance with the heady days of 1969 to see how precipitous the drop has been. According to Comichron data, “Archie” was the top comic in average paid circulation that year, beating staples such as “Superman.” “Betty and Veronica” was outselling both “Batman” and “Spiderman.”

But the market-share analysis from Diamond is probably not the best way to evaluate Archie Comics because the line’s distribution model is unlike that of your typical comic book publisher. As Miller pointed out in a blog post Monday, “Archie” is a particularly difficult-to-quantify series in an already difficult-to-quantify industry. “Archie” is unique in that comic book stores aren’t its primary distribution channel — “Archie” digests, which are sold at grocery stores, sell much, much more than the “Archie” comic, according to Miller. But Miller was able to use annual postal statement data publishers are required to disclose to estimate annual sales of the Archie comic: 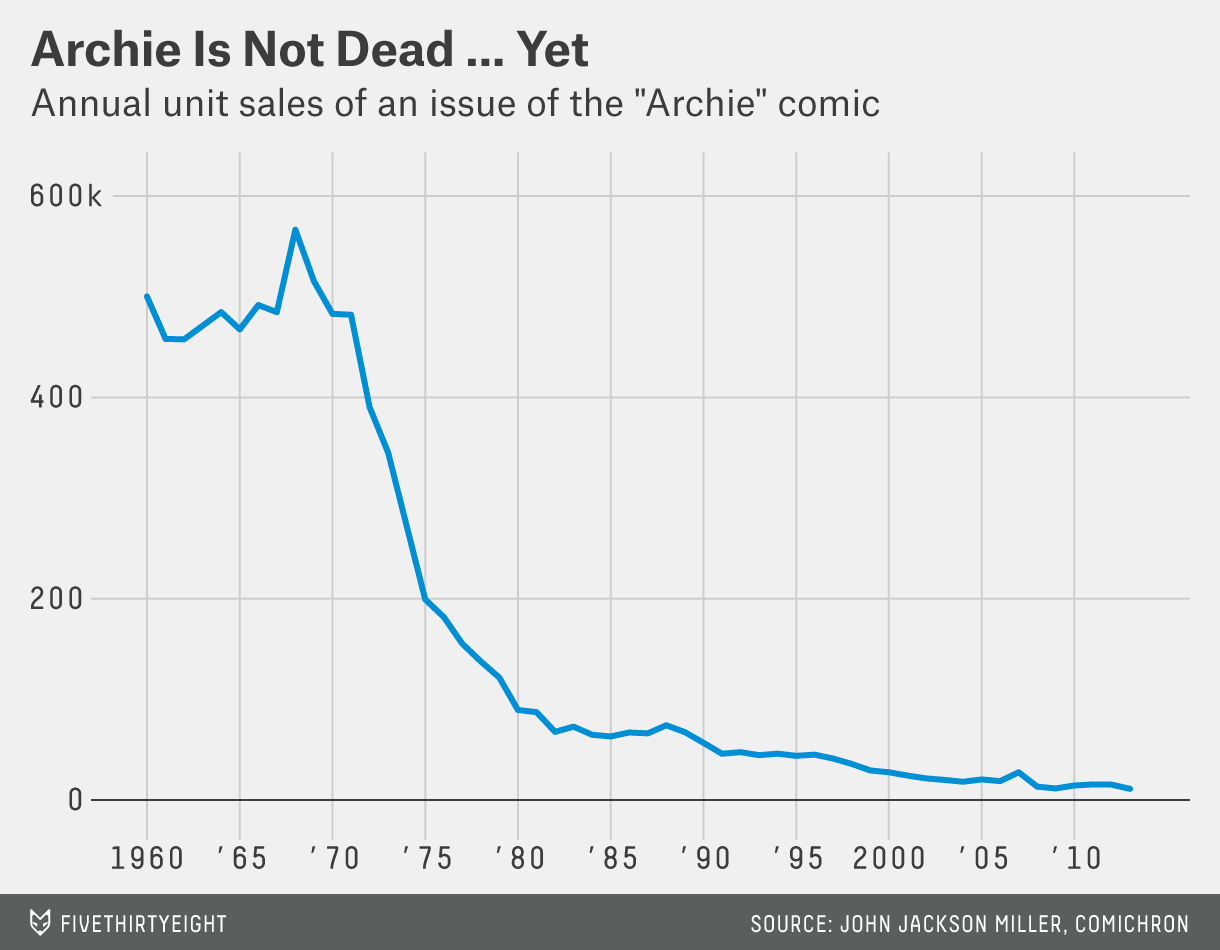 So what kind of sales movement does killing off the main character have on a comic?

“The main example of course is the ‘Death of Superman’ in November 1992 which led to what was reportedly a $30 million day in comics shops, to this day, the largest amount of revenue made in a day in the comics market,” Miller wrote in an email to FiveThirtyEight. “Captain America’s death in the 2000s was another big example.”

You may recall that Superman and Captain America are still among the living.

“Of course,” Miller said,  “neither of the deaths stuck, and Archie’s won’t, either. Comics deaths — and births, and marriages, and super team break-ups — these are mostly stunts, designed to call attention to the books — and they do work, at least for a while.” (Case in point: This is FiveThirtyEight’s first article about Archie.)

Already Archie is seeing some of that effect. The line had the number one graphic novel in June, “Afterlife With Archie,” which sold 12,000 copies.

Still, Miller doubts that this is merely a stunt. The death is taking place in an alternate reality, Miller said, and the writers are using it to merge the two storylines. So there’s a point, story-wise, not just sales-wise. And while “Life With Archie” (in which Archie, ironically, dies) is currently the company’s primary Archie line, it’s not the only title. “The character will live on in the other titles,” Miller assured me.

Regardless of how this 73-year-old teenager manages to return to life, these sorts of events are particularly interesting when it comes to figuring out how stunts and major plot twist impact sales. And since there’s no way this will be the last time a publisher kills off a beloved character — it’s not even the first one this summer and it’s not even going to be the last — it’s a cool look into a business that lives and dies by its ability to hold eyeballs.