The eight best men’s professional tennis players in the world are gathered this week in London for the ATP World Tour Finals. For the fourth straight year, none is an American. The last time an American won this tournament was in 1999, when Pete Sampras beat Andre Agassi in the final. That capped a decade in which Americans won six World Tour Finals and finished second five times.

That was a generation ago. Recent U.S. achievement in men’s tennis has paled in comparison. But that may all be about to change. There’s a new crop of American boys showing remarkable success in the junior ranks, and they’re beginning to make noise as pros. But it’s gotten harder for a junior to make it to the top than it was in Sampras and Agassi’s day.

This new group of American boys is really good. Americans hold the top spot and three of the next five places in the boys junior rankings. Americans have won four of the last six junior Grand Slam titles.1 And just as Sampras and Agassi used to regularly play each other in big finals, this year’s U.S. Open featured an all-American boys’ final in which Taylor Fritz defeated Tommy Paul, 6-2, 6-7(4), 6-2.

Brad Gilbert, coach and commentator for FiveThirtyEight parent ESPN, described the juniors for me: Fritz has “the most weapons by far of all of them,” Frances Tiafoe and Michael Mmoh are the athletic ones, and Reilly Opelka is tall — 6 feet 11 inches tall. Paul is that rarity in American tennis: a clay specialist. He won the French Open juniors title this year.

The last time American juniors came anywhere close to this type of success was from 2003 to 2005, when they had seven top-5 players over three years. But among those seven top young Americans, only Donald Young made the top 50 when he was a pro, peaking at No. 39 in 2011.2

Martin Blackman, head of player development for the U.S. Tennis Association, believes today’s American juniors are better prepared for future success. Referring to the group from a decade ago, Blackman said: “What those guys didn’t have, that we have now, is a team of coaches and a system that’s ready and waiting for them to give them whatever they need.”

Today’s American juniors may have a better support system than their predecessors did, but they face an obstacle that Young and his peers didn’t. Junior rankings are less predictive of professional success than ever before. It’s hard out there for the kids.

To come to that conclusion, I first looked at top junior players between 1987 and 2008 and what happened after they reached the upper tiers. What were the chances, say, that within seven years of making it to the top 103 of the junior ranks, players would end a year at some top level in the pro ranks?4

And here’s what that looks like for a top-5 junior:

If those numbers were to hold true for today’s American juniors, we could anticipate a dramatic change in the success of American pros. Given a 55 percent chance that a top-5 junior will end one of the next seven years in the top 100 as a pro, there is a 91 percent chance that at least one of today’s three top-5 junior boys — Fritz, Mmoh and Paul — will achieve that by 2022. Along these same lines, there is a 33 percent chance that at least one will finish in the year-end top 10 by 2022 — a status that no American man has reached since Mardy Fish in 2011. Add in Stefan Kozlov, 2014 year-end junior No. 3, and the probability that one of these four American juniors will become the highest-ranked professional tennis player in the world is 10.5 percent.5 Not bad.

But will these historical averages hold for today’s juniors? Recent juniors’ struggles to transition to the pros suggest that today’s standout American boys might not be able to match the pro success of top juniors in the 1980s and 1990s. Far fewer top juniors in recent years have been able to move into the top of the year-end pro rankings. The percentages over time of top 100 juniors making various tiers of the top pro rankings (top 10, top 25, top 50, top 100) within seven years show dramatic declines starting in about 1998. 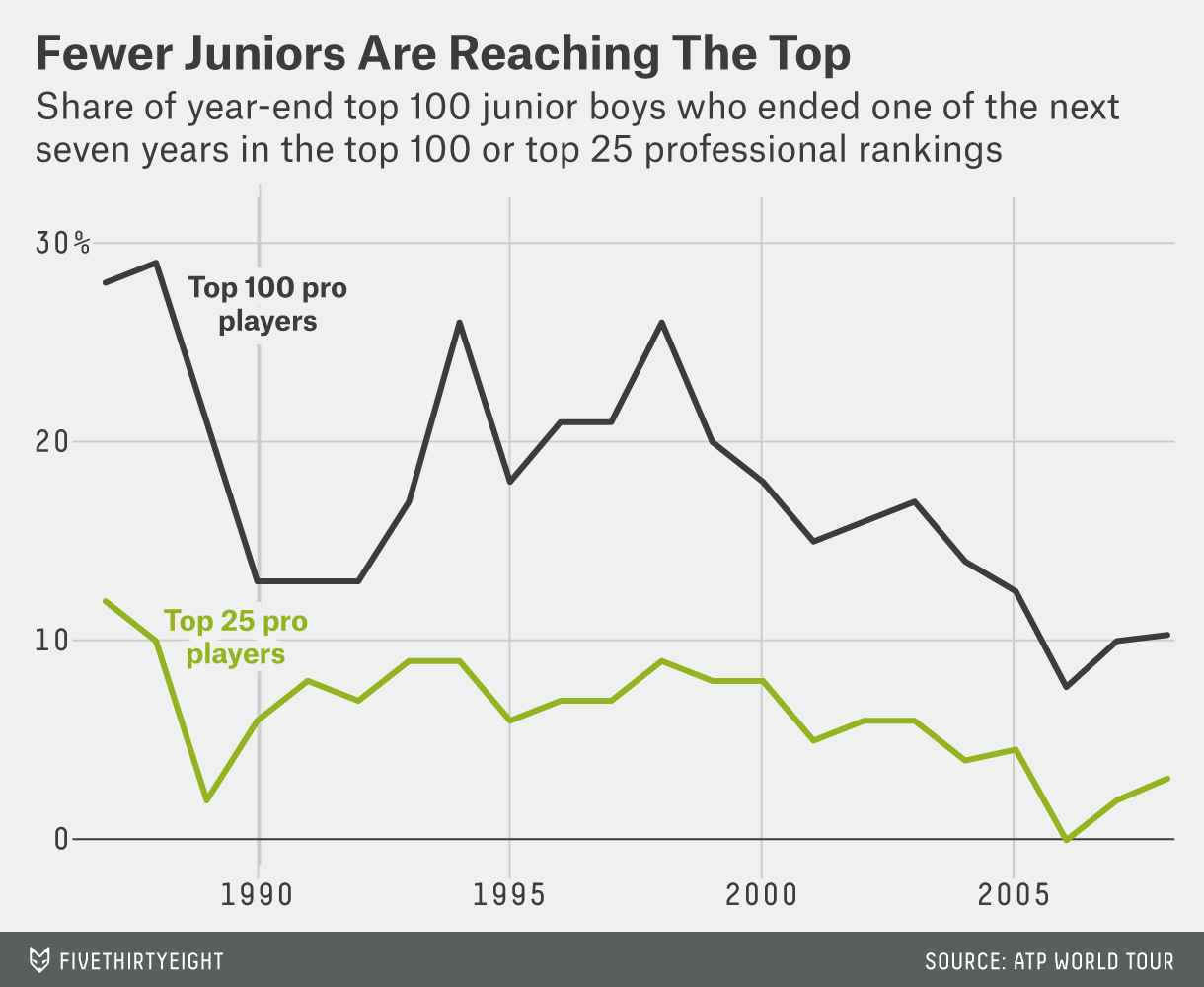 It’s clear that junior boys have recently struggled to make the transition to the pros, but it’s not clear why that’s happening. Is it that junior boys are becoming less competitive over time? Or are pros staying competitive longer, leaving less room for rising juniors in the top rankings?

I grouped juniors into two 10-year cohorts6 to find out, and the answer appears to be the latter. While top juniors from 1987 to 1996 climbed the pro rankings quickly, they peaked and began to decline on average six to seven years after going pro. On the other hand, top juniors from 1997 to 2006 started slower but stuck around longer — and are still near their peak today. We aren’t seeing sudden disorder in the ranks: Players who struggled in juniors aren’t taking over the sport. Top junior boys appear to be as competitive as they’ve always been. The proportion of the ATP top 100 who once ranked in the top 90 as juniors is exactly the same today as it was in 2006.7 It’s just that there aren’t as many spots open for newcomers because the old-timers are staying longer. 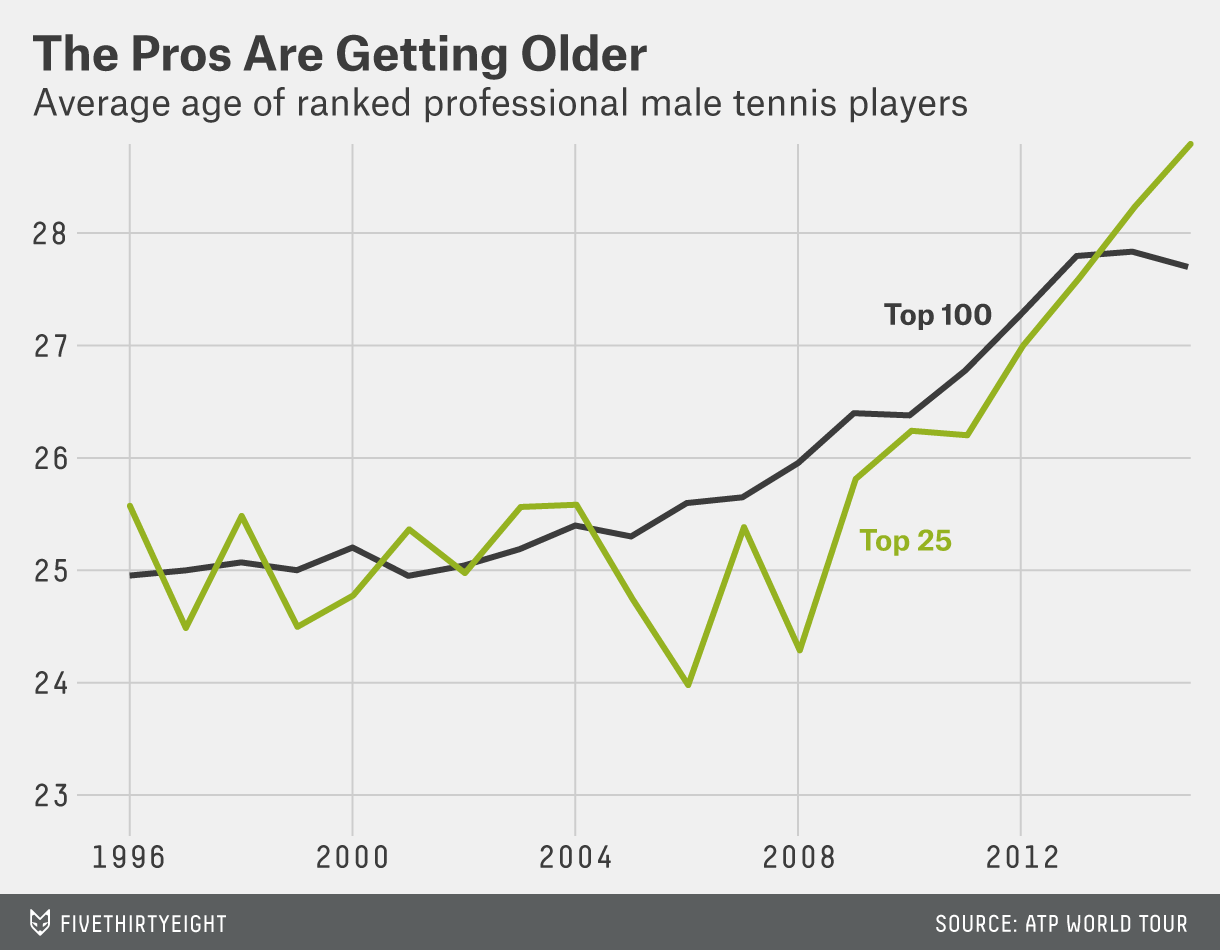 Top American juniors say the improved fitness of pros explains the recent increase in the age of players at the top of the game. “The reason why junior success has been declining [in the pros] is because the game is so much more physical,” Fritz told me. “Nowadays, the players are in absolutely ridiculous physical shape. The body of a teenager just can’t sustain as much.” Opelka agreed: “These guys at 28 are so fit, it’s crazy. … [Playing at that level] seems like a big jump away.”

But is it? The recent top American juniors are already off to an impressive start in the pros, with three teenagers in the top 250: Jared Donaldson, Fritz and Tiafoe. Tiafoe and Fritz achieved those ranks before turning 18. If more than one of them end the same year in the top 100 before they’ve turned 20, that will be the first time that’s happened since Sampras and Chang did it in 1990.

Blackman believes this kind of success won’t end with this group of juniors. “I think that in subsequent years, the group might not be as big as it is now, but I do think that [American junior success] is sustainable,” he said. “Our really good 14- and 15-year-olds can look up at this group of players and be like, ‘Hey, I can do it, too; I’m not that far away.’”

Ultimately, the current generation of top pros will step down, and the new generation has reason to be optimistic. Mmoh said he or one of his peers could make a deep run at a Slam soon. “I think it can come in the next year or two,” he said.

“Let’s keep our fingers crossed,” Gilbert said. “I want to be commentating one of their matches in the quarters or the semis of a Slam!”

Wiley Schubert Reed is a junior tennis player with a 0 percent chance of being ranked in the pros.