Remember acid rain? Resulting largely from the smokestack emissions of coal-fired power plants, acid rain was a serious environmental concern in the 1980s. Studies showed that because of the increasing acidity of rainfall, nearly a quarter of the lakes and streams in the Adirondack Mountains had become uninhabitable by fish. The urgency of the problem prompted amendments to the Clean Air Act in 1990 and the creation of the world’s first “pollution market,” a cap-and-trade program in which power companies were required to buy permits to emit sulfur dioxide and nitrogen oxides, which cause acid rain. The result: Today, acid rain has all but disappeared from news headlines.

Acid rain was rare among environmental problems in that it had a viable solution, and these days it’s often hailed as an environmental success story. The market worked as intended, sulfur and nitrogen emissions declined and rain became less acidic. And just two weeks ago, the U.S. Supreme Court issued a decision upholding the federal government’s authority to regulate power plants in this manner.

But what about the lakes and streams that were already so acidic? Nearly 25 years since those changes to the Clean Air Act, water bodies in the Northeast have recovered, while those further south have not.

To see what recovery from acidification looks like, and to evaluate whether some regions are improving more than others, I analyzed over 20 years of water chemistry data from more than 100 lakes and streams in the eastern U.S., which was hit hardest by acid rain because weather moves from west to east in North America. The data comes from the Long Term Monitoring project, which is administered by the U.S. Environmental Protection Agency.1 I focused on three regions: mountain lakes of the Adirondacks (New York state); mountain streams of the northern Appalachian Mountains (in western Pennsylvania and the Catskill Mountains of New York state); and mountain streams of the central Appalachians (in western Virginia).2

My analysis finds promising trends in the Northeast, but an alarming lack of recovery in the central Appalachians. Many streams in western Virginia show little or no sign of improvement, likely because acidifying compounds stored in the soil are continuing to leach into the water.

First let’s look at sulfate concentrations in the water bodies, since decreases in sulfate are an essential first step in recovery from acidification. The good news is that the lakes of the Adirondacks and streams of the northern Appalachians both show significant decreases over time. In the charts below, each line represents a different water body, and the red lines represent statistical models fit to the data. 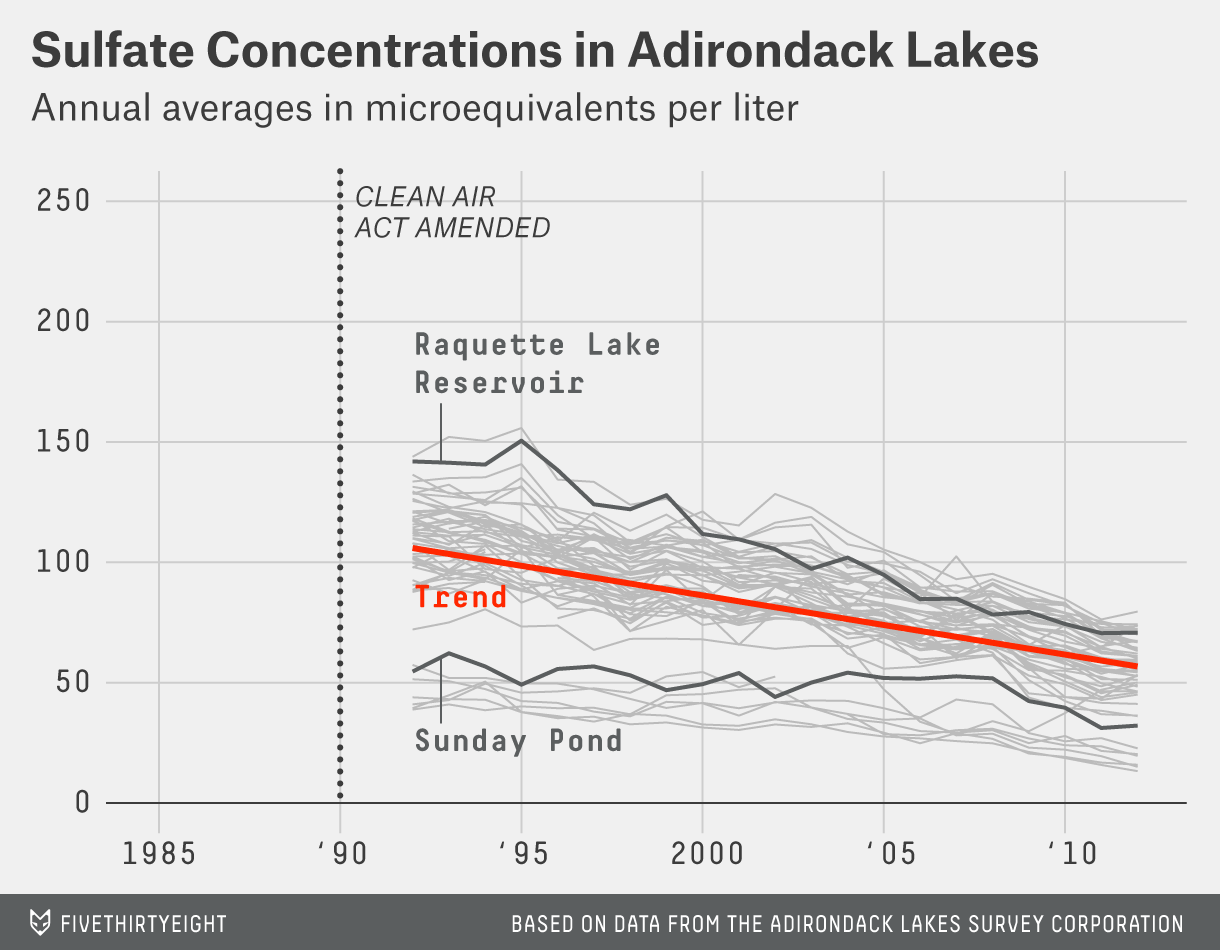 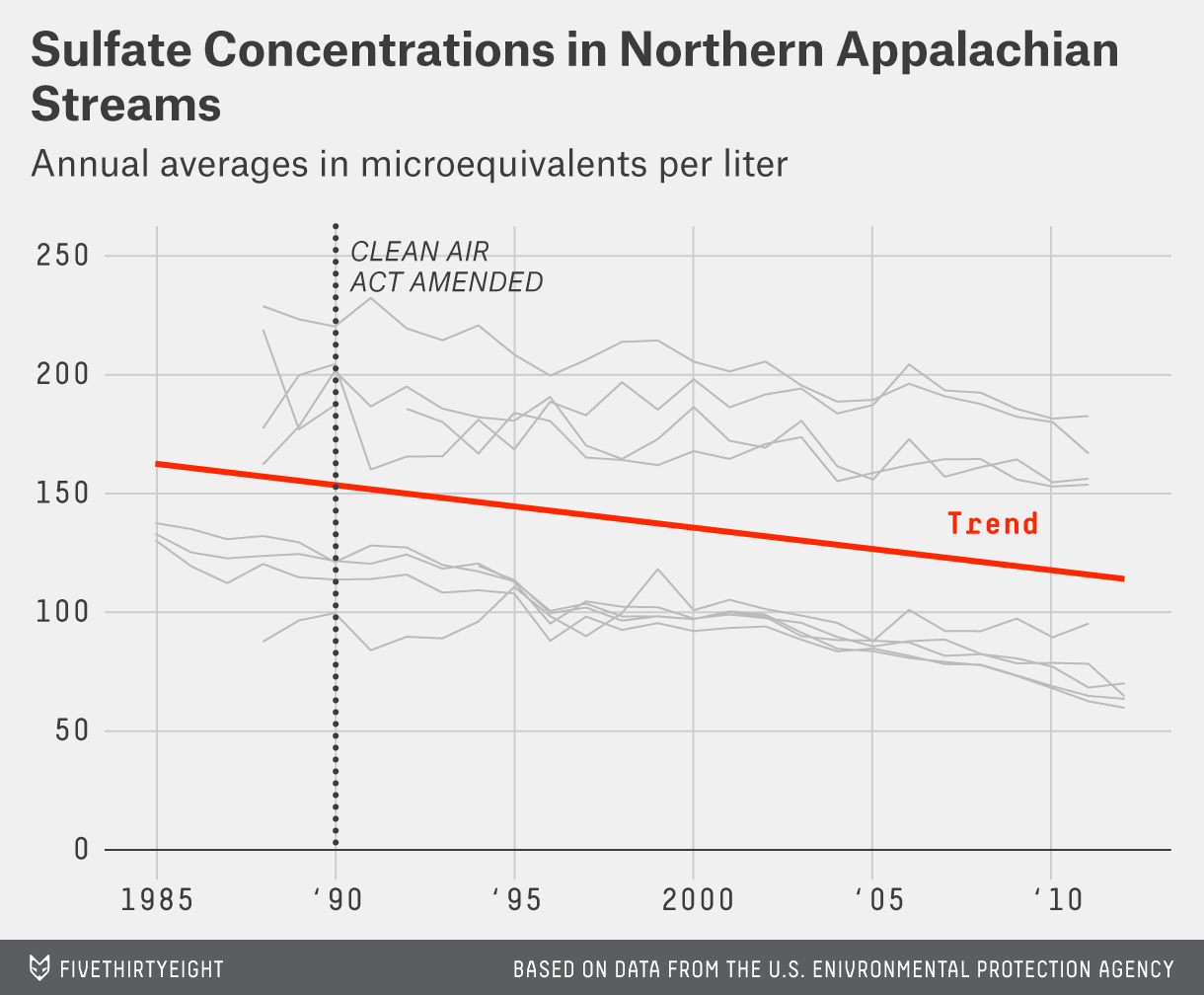 There’s plenty of variation among water bodies, but a statistically significant pattern is clear: Sulfate concentrations have declined over time in both regions.3 For instance, in the Adirondacks, sulfate concentrations in Raquette Lake Reservoir, smack in the middle of the New York mountain range, are declining fastest. This reservoir also started with one of the highest sulfate levels among all Adirondack lakes, so it had a lot of room for improvement. Sunday Pond, just west of the towns of Saranac Lake and Lake Placid, had the slowest declines in sulfate concentrations among the Adirondack lakes. However, as you can see in the chart, this pond wasn’t in particularly bad shape to start with, and even it is improving.

These declines in sulfate concentrations in the water bodies of New York and Pennsylvania are a promising sign. But they aren’t universal. The monitoring sites in the central Appalachian region (streams in western Virginia) show a different pattern. 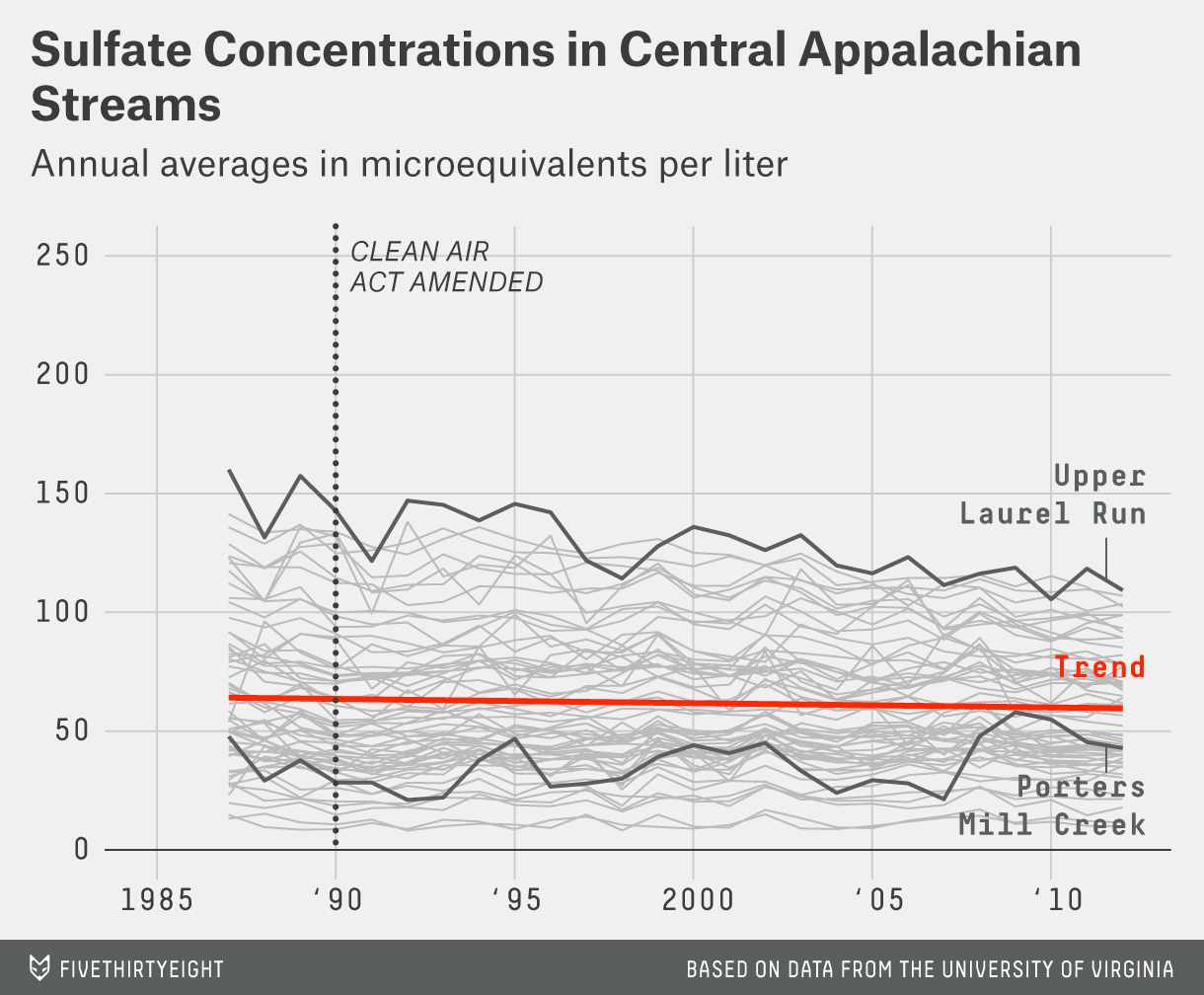 What does this all mean for the actual acidity of water in the lakes and streams? One way scientists assess the acidification status of a body of water is a metric known as acid neutralizing capacity, or ANC. ANC measures the capacity of a body of water to neutralize acids added to it. The higher the ANC, the better. For instance, a high ANC correlates with the presence of a greater number of fish species like trout and dace. With an ANC above 100, we can be confident that acidification does not threaten fish and other aquatic organisms. Between 50 and 100, we enter a range in which acid-sensitive species of fish and other animals may be stressed. Below 50, many fish species cannot persist and are no longer present.

In the Northeast, we see increasing ANC over the past two decades in the charts below, but the rate of improvement is slower than what we saw in sulfate concentrations, and many water bodies still have a long way to go. 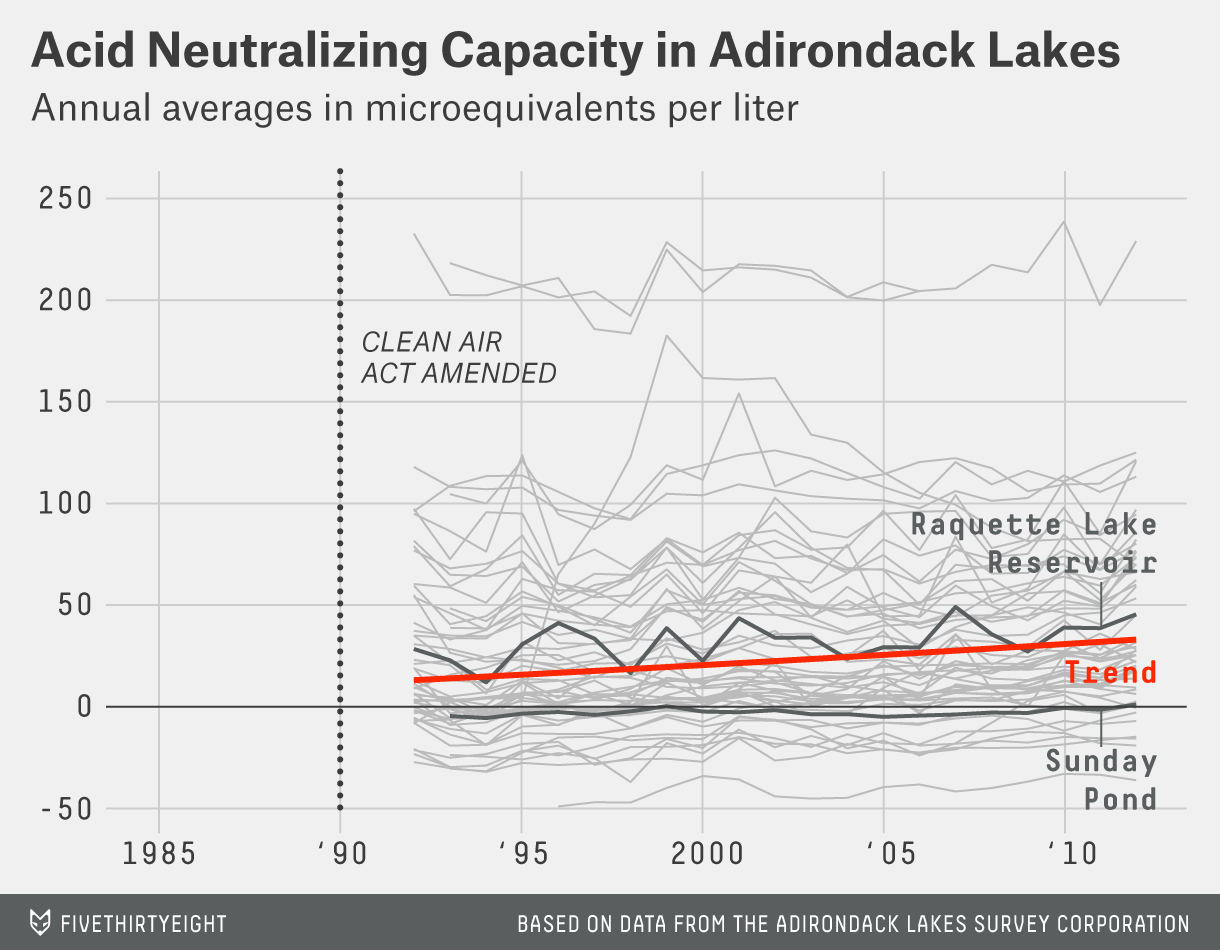 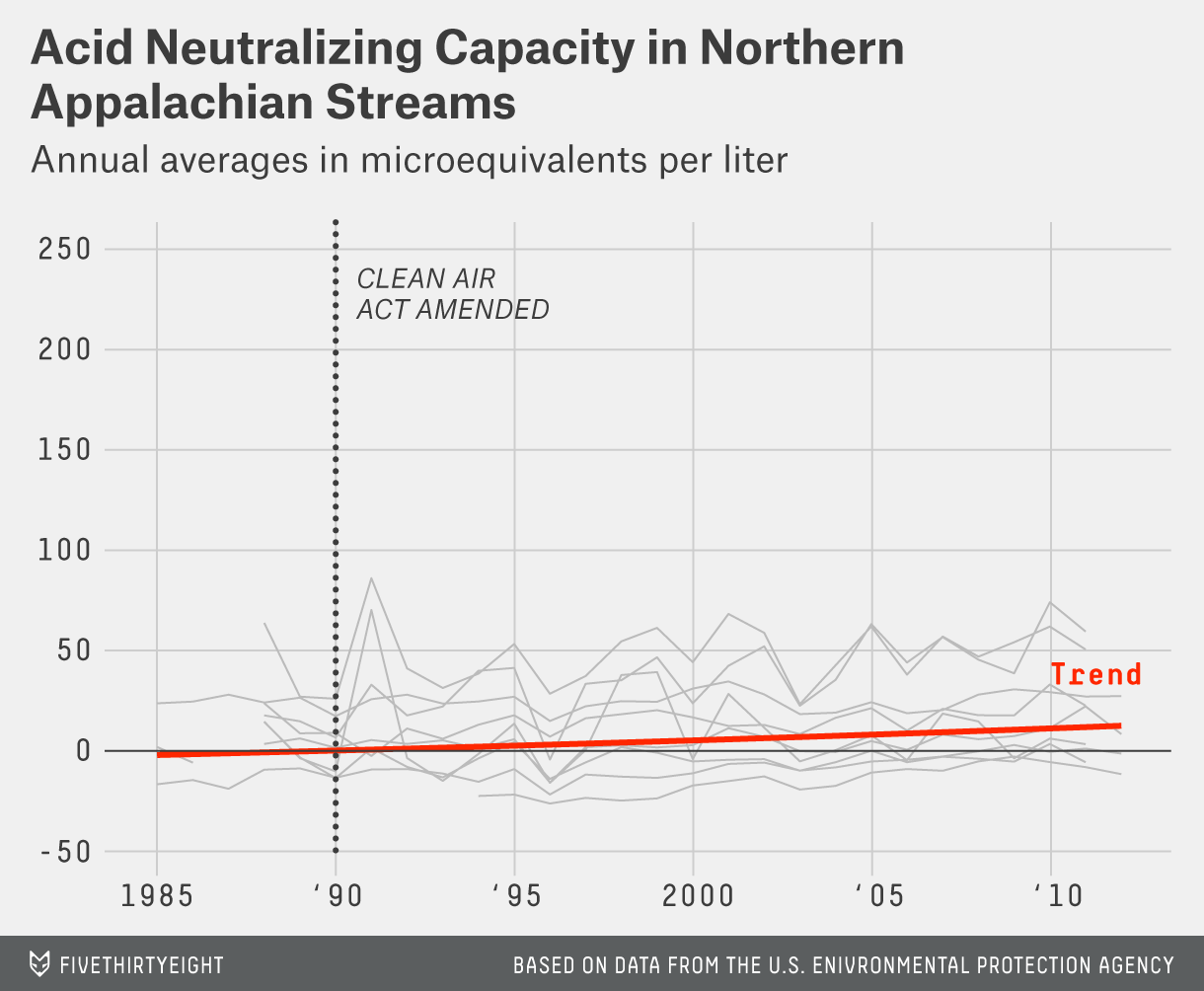 The recovery from acidification in these water bodies clearly lags behind the reductions in emissions from power plants — an unfortunate result that researchers attribute to soil damage caused by decades of exposure to elevated sulfate levels. Sunday Pond, which had the slowest decrease in sulfate concentrations of all Adirondack lakes, has an alarming negative ANC value that hasn’t improved over time. However, the statistically significant increases over time at the regional level show that recovery is occurring in the Adirondacks and the northern Appalachians.5 Given enough time, these trends could lead to an almost full recovery in most of these water bodies. Policymakers can (and do) argue about whether freshwaters are recovering “fast enough,” but it is undeniable that overall, these lines are moving in the right direction.

The story further south is different. In the central Appalachians, the line isn’t moving at all — it’s flat. There is no statistically significant change in ANC over time.6 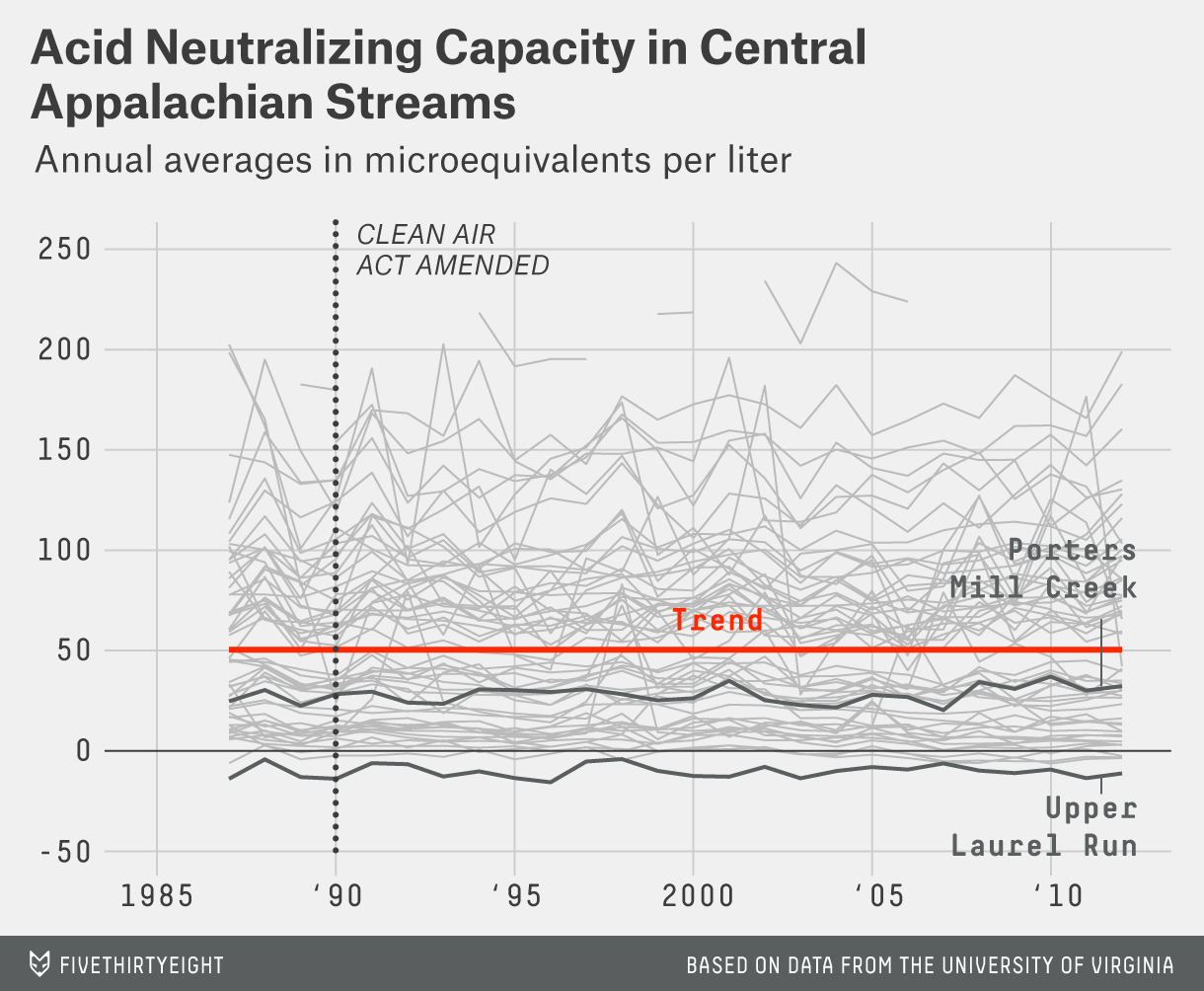 The streams this data comes from are located in western Virginia, in the Ridge and Blue Ridge provinces of the Appalachian Mountains (including Shenandoah National Park and George Washington and Jefferson National Forests). Strangely, Laurel Run, which had the fastest decrease in sulfate concentrations (a good thing), has the worst ANC values of the region, with no sign of improvement over time. Streams here aren’t recovering from acidification like the water bodies in the Northeast are, and scientists have been working to figure out why.

The answer may lie in differences in local geology. A research group at the University of Virginia, which collects the stream data in this region, has developed a compelling hypothesis, presented in an article published last year in the scientific journal Biogeochemistry.

The central Appalachians were not glaciated during the last ice age, unlike the regions further north. One consequence is that Virginia’s soils are older and therefore highly weathered. Weathered soil has a much higher capacity for sulfate to stick to it. When sulfate was deposited on the landscape in its highest concentrations in the late 1980s, a large portion of that sulfate was retained in the soil, and not immediately deposited into water bodies.

Sulfate retention in the soil was initially a good thing for aquatic life in the central Appalachians — it’s one reason why the sulfate concentrations and ANC levels weren’t quite as bad as they were in the Adirondacks in the early 1990s. In the Adirondacks, more of the sulfate from acid rain went straight into the water bodies rather than stick to the soil.

The problem today is that the sulfate stored in the soils of the central Appalachians is coming back out. With sulfate concentrations in rainfall on the decline, the soils are leaching their stored sulfate back into the water.

Rick Webb of the University of Virginia coordinated the monitoring program in the central Appalachians for 25 years until his recent retirement. He says in Adirondack lakes, the consequences of acid rain occurred directly after the rain fell, and the recovery process began almost immediately after sulfate emissions declined. In the central Appalachians, the negative effects of acidification occurred at a slower pace, but the recovery has also been slow.

Geology cuts both ways. The coal veins that run rich in this region — as well as its highly weathered soils — are both a consequence of geologic history.

What can be done about the predicament of central Appalachian streams? The most obvious action, however unlikely, would be further reductions in emissions of sulfur and nitrogen oxides. The recent Supreme Court decision upheld the federal government’s authority to regulate these pollutants, but it merely set the stage for a larger battle with the power industry. The EPA intends to use the Clean Air Act, and the court’s decision, to justify the first-ever limits on carbon dioxide emissions from coal-fired power plants. The agency is expected to announce the new regulations next month.

The soils of the central Appalachians will continue to release sulfate into the water for years to come, but lower additions from man-made sources in the present would decrease the burden on ecosystems haunted by the ghost of emissions past.