Red Klotz, the founder and longtime coach of the Washington Generals, the Harlem Globetrotters’ perpetually feeble opponents, died at age 93 last week (I highly recommend Joe Posnanski’s remembrance). Klotz’s all-time record as a head coach of the Generals and their namesakes was something like six wins and 14,000 losses — they lost 99.96 percent of the time.

How exactly did the Generals lose so consistently? How much of it was their conceding games on purpose, as opposed to simply being really bad at basketball?

Let’s first get a sense for how good the Globetrotters were. How have they performed in competitive games. Wait, the Globetrotters sometimes played serious basketball? Yes — from 2000 to 2003 they played a series of games against NCAA teams. (The NCAA banned the practice in 2004.) News accounts of these games insist that they were taken seriously by both the Globetrotters and their NCAA opponents.

As best as I can tell — statistical records for anything involving the Globetrotters are sketchy — they went 13-9 in games against Division I opponents while winning by an average of about five points per game. This is reasonably impressive. As a barnstorming team, all of the Globetrotters’ games were played on the road, and some of their opponents were pretty good: Michigan State, Syracuse, Connecticut and so on.

We can come to an estimate of the Globetrotters’ strength by looking up the SRS rating of their college opponents. SRS (Simple Rating System) is a Sports-Reference.com invention which accounts for a team’s margin of victory and strength of schedule. A team’s SRS rating represents how much it would outscore (or be outscored by) an average opponent from its league. 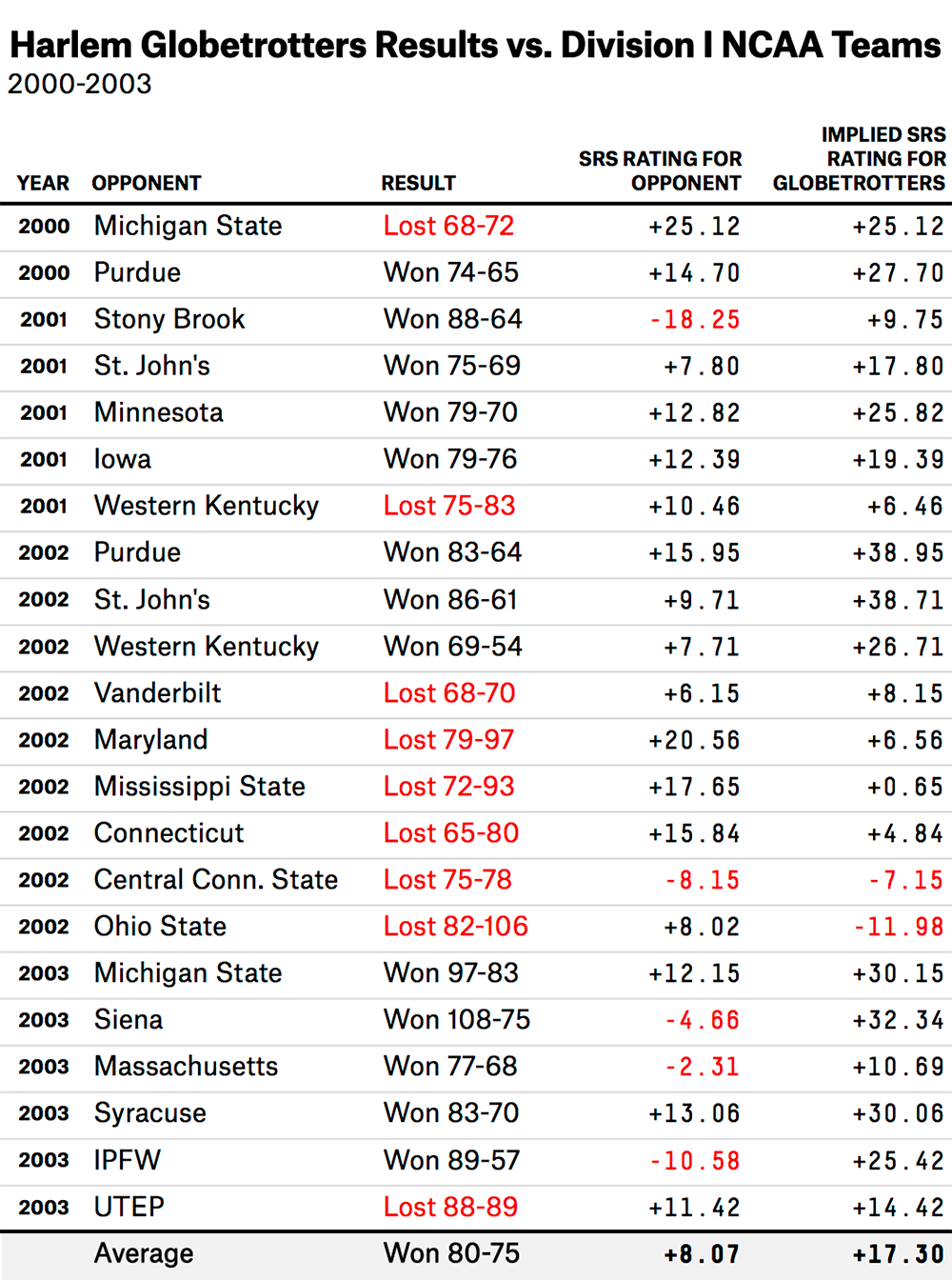 The Globetrotters come out with an SRS of about +17 based on our sample. That’s pretty good — it’s similar to the SRS rating that Syracuse, Ohio State, Baylor, Wichita State and the national champion Connecticut Huskies had last season. If they entered the NCAA tournament, the Globetrotters would deserve to be slotted in as something like a No. 4 or 5 seed.

Based on these assumptions, if the Globetrotters and Generals played straight-up basketball, the Globetrotters would win by an average score of 63-52. (You can get to these numbers by multiplying each team’s points per possession by 55 possessions per game.) This would translate into their beating the Generals 94 percent of the time by basketball’s Pythagorean formula. Had the Generals played to win on every possession, Klotz would have finished with a career record of about 840 and 12,166.

As a gut check on this back-of-the-envelope calculation, let’s account for what happens when the Globetrotters employ a trick play, as they did 60 percent of the time in Posnanski’s estimation. Let’s assume that their scoring efficiency in these cases is two points per possession, equivalent to scoring a two-point field goal every time down the court. In practice, the Globetrotters no doubt miss some baskets, even when the Generals are laying down to them. But they could also boost their scoring efficiency through 3-pointers (and in the Globetrotters’ case, 4-pointers!) and offensive rebounds.