A decade after Adolf Hitler was defeated, Yad Vashem, the Holocaust museum and research center in Jerusalem, began gathering the names of the approximately 6 million Jews from Europe and North Africa murdered by Nazi Germany. Today, 70 years after the liberation of Auschwitz, the work goes on — with more than 1 million victims still unaccounted for.

The international data-collection project began in 1955, stemming from an Israeli law that established Yad Vashem. The Nazis left little evidence of their genocide. Hundreds of thousands of Jews who survived the Holocaust moved to Israel after the war, and the museum staff sought their help recovering details of the destroyed Jewish communities of Europe. In the 1950s, they and others around the world filled out 800,000 one-page forms listing details of victims: their names, where they lived, who their parents were.1 “We consider them almost paper tombstones,” Cynthia Wroclawski, manager of the Shoah Victims’ Names Recovery Project at Yad Vashem, said of the pages of testimony. (Shoah is the Hebrew word for the Holocaust.) Some 2.5 million of these paper tombstones are contained in the museum’s Hall of Names.

Today, many of the original data submitters are dead, as are most people who were alive during the Holocaust. Yet the museum continues to devote staff — about 40 people — and resources — millions of dollars over the past decade — to filling gaps in its database, searching for clues about who died, where and how they died, and who they were when they lived.

Alexander Avram, who is in charge of the central database, describes the work as “a very big puzzle that has to be put together.” He said it grows “ever more complicated and challenging.”

By most estimates, nearly 6 million Jews died in the Holocaust.2 So far, Yad Vashem has gathered 7 million records. But these include lots of overlap — the same name reported by different survivors or from other sources such as deportation lists. Avram estimates that there are 4.3 million different people in the database — and only about 3.5 million people with information about their place of residence. The biggest gaps are in Poland, the former Soviet Union and Romania: Roughly half of victims’ names from those countries are known, compared to 97 percent or more of victims from many Western European countries. 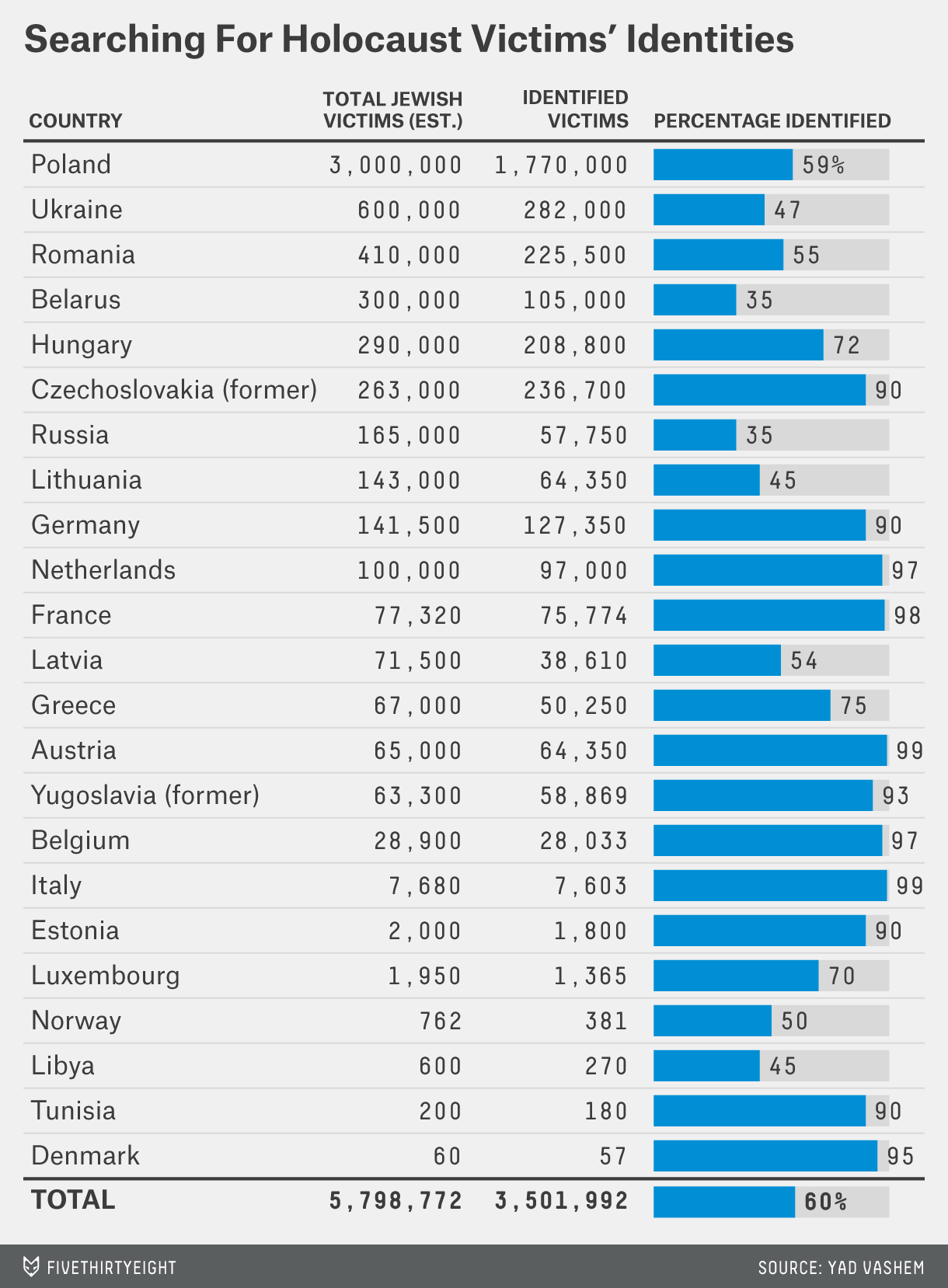 To fill the gaps, researchers are reaching out to Jewish groups in Eastern Europe, seeking to connect with survivors or their descendants who have information they haven’t yet shared. They’re also traveling to Orthodox Jewish synagogues and cemeteries to photograph memorials and plaques, seeking names that might have been missed. And they’re combing through millions of pages of documents they haven’t yet digitized, entering data manually.

The work, at this stage, yields new information slowly. “You can say the low-hanging fruit was collected,” Avram said. Wroclawski said Avram frequently tells his colleagues that now just two of 20 names are likely to be new ones, compared to five of 10 in earlier stages of the work.

It’s unlikely that the project will ever yield the name of every Jewish victim, Wroclawski said. In many places, whole Jewish communities were wiped out, she said. “There’s nobody living there anymore. There might just not be any remnant of those people by their names.”

Wroclawski and Avram had relatives who died in the Holocaust. Wroclawski searched for details in Latvia but encountered an obstacle that has stymied research in many places: The archives had been destroyed by administrators who didn’t think they mattered to anyone.3 “Sometimes you don’t have luck,” she said. “Sometimes you’re left with a question mark.”

Avram’s uncle died in France, and some of his relatives in Romania were persecuted. “But it’s not a personal issue,” he said. “It’s a job with a mission.”

I asked him why he and his institution have the mission to remember every victim by name. He answered by mentioning a book published by Yad Vashem, “Final Letters,” that collected letters written by victims

“In many of those letters, there is a call: ‘Remember, don’t forget us,’ ” Avram said. “This is like an order: Don’t forget.” Many survivors, too, decide their purpose is to testify about those who didn’t survive, he said. There is also a cultural aspect to the mission. Many Jews traditionally annotate prayer books with their family history and pass them along through the generations. Yad Vashem is continuing the tradition by writing these records for families who aren’t able to, including those who were wiped out. “Many times I say that Jews are the people of memory,” Avram said.

The purpose is not, primarily, to refute Holocaust deniers. “If somebody is willing to say that the Holocaust didn’t happen, I am not sure that a list of victims will convince him,” Avram said.

Scholarship also isn’t the main goal, though the database could help researchers seeking to learn about Jewish prewar history. It also has been a boon to people researching their families. Sometimes people have been reunited with relatives who they thought were dead by finding their submissions of information about other relatives.

Yad Vashem doesn’t set a high bar for inclusion of testimony. The thinking is that few people witnessed deaths personally and survived. So, for instance, the best evidence about some victims might be witness accounts of their deportation from a Jewish ghetto, coupled with evidence that the train they left on was bound for Auschwitz. Staff will check to ensure a submission doesn’t contradict other information. I asked whether someone named as a victim ever turns out to have survived. Avram said it happens rarely. “Unfortunately, we only had a few hundred cases like this,” he said. “I would be very happy if they were in the thousands or tens of thousands.”

Making the information searchable and accessible was itself a feat of data management. Avram, who has two master’s degrees in philology, the study of languages, led staff in digitizing pages of testimony that were filled out in dozens of languages. The database, which went online in 2004, is searchable in English, Hebrew, German, Russian and Spanish. It has been programmed to match queries with one spelling to entries with another: Isaac Cohn from Bratislava could be the same man as Yitzchak Cohen from Pressburg. It recognizes variants of Alexander in many languages, such as Sasha, Sender and Sandor. Thousands of these sorts of equivalents had to be entered manually.

“We had to build it from scratch,” Avram said.

The database excludes the names of most victims whom staff know were not Jewish.4 Some Holocaust victim databases maintained by others, such as those of victims at particular concentration camps or the one run by the U.S. Holocaust Memorial Museum in Washington, D.C., strive to include the names of the non-Jewish victims of the Holocaust, including gays, Roma people and people with disabilities. Asked about parallel data-collection efforts, which include JewishGen’s Holocaust Database, Avram said, “Everyone went on with his own project. We are trying to coordinate and see how we can cooperate.”

Avram and Wroclawski envision further improvements to the database: connecting records of victims who were related to allow for genealogical research, say, or linking records, photos and other resources on a single victim to create a memorial page. There is also more Avram would like to do to connect Hebrew names with local variants. And there’s lots more data that’s been collected but not inputted, including information from all those digital photos of memorial plaques and tombstones.

The most urgent task, though, is to collect testimony from any survivors before they die or simply forget. “We are always in the last hour,” Avram said. “Unfortunately, we can see the numbers are dwindling. It’s a fact of life.”

Wroclawski is leading the outreach effort to try to get staff and volunteers in position to listen when people are ready to talk. “We want to be there when the person who has never opened up and never has said anything says, ‘My goodness, I really am the last person to remember these people. I need to tell someone.’ “