The FiveThirtyEight Senate Forecasting Model, which correctly predicted the outcome of all 35 Senate races in 2008, now regards Republican Scott Brown as a 74 percent favorite to win the Senate seat in Massachusetts on the basis of new polling from ARG, Research 2000 and InsiderAdvantage which show worsening numbers for Brown’s opponent, Martha Coakley. We have traditionally categorized races in which one side has between a 60 and 80 percent chance of winning as “leaning” toward that candidate, and so that is how we categorize this race now: Lean GOP. Nevertheless, there is a higher-than-usual chance of large, correlated errors in the polling, such as were observed in NY-23 and the New Hampshire Democratic primary; the model hedges against this risk partially, but not completely. 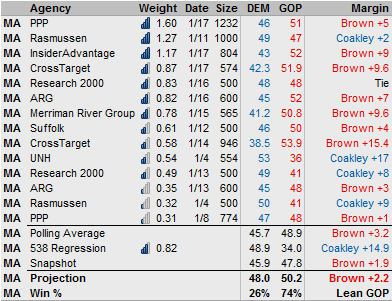 Coakley’s odds are substantially worse than they appeared to be 24 hours ago, when there were fewer credible polls to evaluate and there appeared to be some chance that her numbers were bottoming out and perhaps reversing. However, the ARG and Research 2000 polls both show clear and recent trends against her. Indeed the model, which was optimized for regular rather than special elections, may be too slow to incorporate new information and may understate the magnitude of the trend toward Brown.

At the same time, pollsters are more error-prone in special rather than general elections, as in other types of elections (like primaries) where turnout is hard to model. In addition, the polling may not just be error-prone but also biased in one direction. In particular, polling in comparable elections in the past, in which a Democratic or Republican candidate was facing an unusually vigorous challenge in a very blue or very red state, have tended to underestimate the performance of that candidate by an average of 2.3 points.

The 538 model builds in a de facto hedge against this by adjusting the polling average for the demographics of the state in accordance with our established procedures. Without such a hedge, it would regard Brown as better than an 85 percent favorite. However, the model is not hedged fully, as it gives Coakley a 1.3 point “bonus” rather than the 2.3 point margin by which candidates in her position have traditionally outperformed their polls. With a 2.3 point “bonus” instead, Coakley’s odds of victory would be approximately 40 percent.

If significant, correlated errors in the polling occur, it is most likely to be the result of response bias, owing to the substantially greater enthusiasm of Scott Brown voters, who may be more willing to answer a pollster’s phone call after having been besieged by calls from both campaigns over the past several days. Some of the pollsters’ findings, like a mid-40s approval rating for Obama among ‘likely’ voters, are hard to reconcile with the turnouts in New Jersey or Virginia, with evidence from national polling trends, or with anecdotal reports of potentially very high turnout. A variety of factors, ranging from the increasing use of IVR polls and short sampling periods, to the unusual partisan composition of the Massachusetts electorate (which is plurality independent), to the generally inexperienced polling firms which have surveyed the state, could make these effects more likely.

In addition, there is a small chance that movement toward Coakley could occur after the pollsters have left the field. Until very recently, most voters assumed that Coakley would win; the fact that her chances are now imperiled could motivate more of them to vote, or to avoid casting a “protest vote” against her for one of her opponents. However, the chances are perhaps just as good that her voters become too despondent to turn out, which could produce a fairly substantial victory for Brown

Overall, while I would probably take Coakley’s side of a 3:1 wager, her situation looks to be increasingly difficult. She is basically relying upon getting solid turnout from a “silent majority” of voters who have done little to make themselves seen and heard. We know that there are a huge number of potential such voters in Massachusetts, which remains a very blue state and which until the past three weeks had not behaved unusually in any obvious way. But the pollsters are no longer seeing and hearing from them.

Addendum: There are many assumptions in this model which may not be valid; they are discussed at considerable length here. Although I believe that these are generally a fairly well-balanced set of assumptions relative to the universe of possible assumptions (i.e. alternate sets of assumptions would tend to cluster around the 25 percent number), it is hard to know for sure. Voters and political operatives should continue to proceed as though every vote matters, as we are still well within the range where small, decimal-point shifts in turnout could have a comparatively large impact on each candidate’s chance of prevailing.